After a practice session dominated by Muscle Milk Aston Martin Racing, Guy Smith threw down the fastest lap for Dyson Racing on Friday morning in practice for the Tequila Patron American Le Mans Series at Long Beach. The Englishman set a time of 1:16.780 in Mazda-powered Lola that he will share with Chris Dyson in Saturday's race. 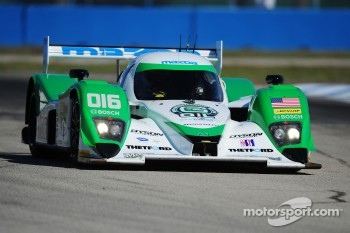 Smith was just 0.286 seconds quicker than Lucas Luhr in the Muscle Milk Lola-Aston Martin coupe. The German, a winner here with Audi Sport in 2008, will drive with Klaus Graf.

The battle was even closer in GT, which is nothing new. Flying Lizard Motorsports' Patrick Long set the class' fastest lap on his final pass around the Long Beach circuit - a 1:20.264 in the Porsche 911 GT3 RSR that he will share with Joerg Bergmeister. The top four cars were within 0.816 seconds, and for a time the top nine cars were separated by less than a second.

Long and Bergmeister have won the last two years in class. The American Porsche factory driver was 0.258 seconds quicker than Joey Hand in one of BMW Team RLL's BMW M3 GTs. He will drive with Dirk Mueller, the pairing having won at Sebring with Andy Priaulx.

Gunnar Jeannette went quickest in LMPC for CORE autosport at 1:19.089 in the ORECA FLM09 he will share with Ricardo Gonzalez. Last year's LMPC co-winner was 0.324 seconds quicker than Alex Figge in PR1/Mathiasen Motorsports' entry, and Elton Julian - Jeannette's co-driver last year - was 0.829 seconds behind the CORE car.

Christophe Bouchut was quickest in LMP2 for Level 5 Motorsports at 1:20.261. The Frenchman was more than two seconds clear of teammate Luis Diaz in the second Level 5 entry.

Qualifying is set for 5 p.m. PT today with live video and radio coverage available through americanlemans.com.