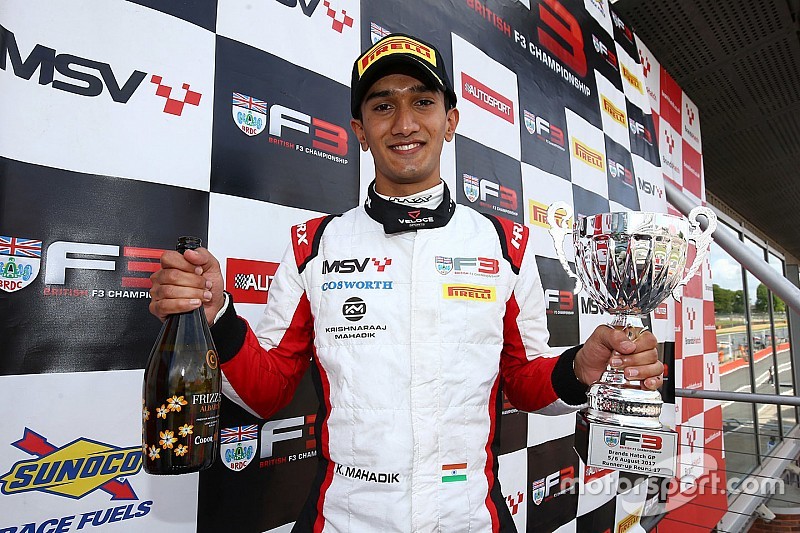 Krishnaraaj Mahadik will contest the 2018 BRDC British F3 season for Double R Racing, it has been announced.

It will be Mahadik’s first full-season in British F3, although the 19-year-old has already racked up eight rounds of experience in the UK’s premier single-seater championship over the last two years.

Mahadik made his series debut in the second round of 2016 and stayed on for much of the year, only skipping the Silverstone weekend.

He returned to the series for two rounds in the middle part of last year, scoring an emphatic win at the iconics Brands Hatch circuit - the first for an Indian driver in British F3.

The Kolhapur-born driver will continue his tie-up with Double R Racing, with whom he notched his maiden triumph last year.

“I am delighted to be racing with Double R for the 2018 season”, Mahadik said. “We performed really well together last year and I feel we have unfinished business in British F3, I want to build on that!

“We are all really looking forward to a successful season and I can’t wait to hit the track. I am feeling focused and on top of my game and I know I have the best group of guys around me. At Double R I feel part of the family and, together, I feel like we can achieve great things this year.”

Mahadik will team up British F3 rookie Linus Lundqvist and a yet-to-be-announced driver at Double R.

The Woking-based squad finished second in the 2016 season, but slipped down the order last year.

“Everyone at the team is very happy to see Krish back with us for 2018, he did a fantastic job on his first outing with us last year at Brands Hatch – to win on his first weekend with Double R really was a perfect start to the relationship”, team principal Anthony Hieatt said.

“British F3 is always super competitive but we know Krish has the capability of challenging at the front and with the experience he’s gained in F3 over the last couple of years, it should be a strong season together.”

Mahadik is the second Indian driver to sign-up for British F3 after Italian F4 podium finisher Kush Maini, who will be racing for Lanan Racing.