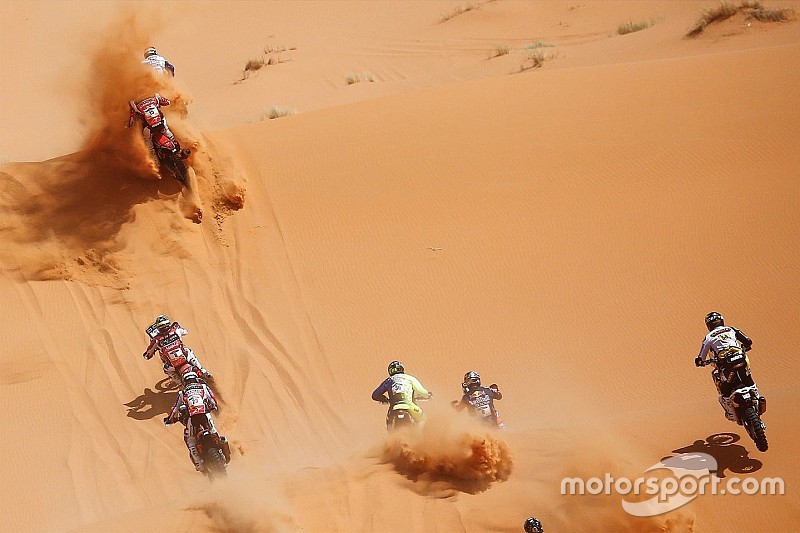 Monday’s stage consisted of 8km of link road before a 208km timed test, divided into two sectors (one of 86km and another of 115km with a neutralized zone between them). A large stretch of dunes around Merzouga, and another complicated stretch with small dunes, were the ingredients of the first stage.

In this type of terrain, Nasser Al Attiyah and Matthieu Baumel were at ease. The Qatari and the Frenchman won the stage with more than 19 minutes of advantage against all their four-wheeled rivals. Among them, Dani Sola and Sergio Lafuente stood out, and they finished second.

In bikes, van Beveren outstripped all his rivals by more than four minutes. The closest was Stefan Svitko, with a private KTM, who finished 4m17s behind the Frenchman, followed by Michael Metge, winner of Sunday's Prologue, 10m05s behind the leader.

“During the prologue, I make a small mistake on navigation,” said van Beveren.“I lost a bit of time and I really wanted to go fast today.

“I had so good sensation with my bike, I try to push, I knew I was fast but I didn’t know I’d be that far ahead.

“There were so many notes and many, many changes of direction. I pushed a little, but my focus was to stay on the right tracks with good navigation.”

In the quad class, Frenchman Axiel Dutrie (Yamaha) won the stage, with 4m04s advantage over Clement Jay and 36m14s over Argentinean Facundo Viel.