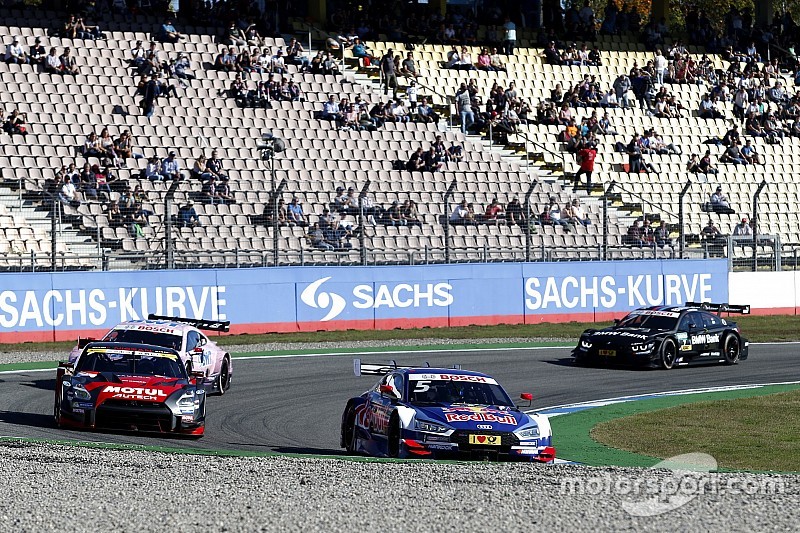 Super GT chief Masaaki Bandoh has revealed more details about the series’ first crossover race with DTM that will take place at Fuji Speedway in November.

Out of the 18 cars that are contesting the current DTM season, only 12-14 cars will be shipped to Japan for logistical reasons.

They will join an as-yet unknown number of GT500 cars, with the situation complicated by the decision to use Hankook as control tyre supplier for the Fuji race.

All Super GT teams have wide-ranging deals with their respective tyre manufacturers, akin to those during the Bridgestone-Michelin tyre war era in Formula 1, with some contracts also including lucrative commercial arrangements.

"We will be able to carry 12 to 14 [DTM] cars in one jumbo jet,” Bandoh said, without revealing the number of Super GT cars expected to take part in the race.

“We can carry up to 14 cars in seven rows with two cars up and down. We will carry other luggage on both sides."

Bandoh added that the technical details to ensure parity between the cars are still being worked out as Super GT will not fully adopt Class One regulations until next year. Moreover, Honda’s NSX-GT is an anomaly in the field, being the only car to run a mid-engine layout.

However, the Super GT chief confirmed that DTM cars will be prohibited from using DRS as the overtake device would give it a significant advantage over Super GT machines on Fuji’s long start/finish straight.

There was no word about the usage of DTM’s push-to-pass system, which was introduced by the series at the start of this season.

"The DRS used in DTM will not be used in the race,” Bandoh said. “Because Fuji Speedway has a long straight, the Super GT cars that do not have it stand to be disadvantaged.

“We will also discuss the vehicle weight. We try to be as fair as possible [in ensuring parity between the cars]."

Bandoh described the Class One regulations jointly devised by series promoters ITR and GTA as a “breakthrough”, particularly as they required no involvement from the FIA.

"Until now, it has been common practice to race according to the regulations summarised by the FIA. However, ITR and GTA promoters made Class One rules and [the joint] race, it's a breakthrough.

"What form the regulations take in future is a story for another time. Naturally, there are many differences in thinking between European and Japanese manufacturers and between promoters. But, I think that it is [important] to carry out this [race] as a starting point.

"The rules are not about winning and losing. It may not be part of a perfect competition yet, but we can run together, it's about what we can do together with Europe. So far I believe in things and I would like you to see its direction."

The track action for the joint race will begin on Friday, with the pair of races split across Saturday and Sunday. As revealed earlier, the event will follow DTM’s sprint format, although the exact length of the races has still to be announced.

Rast’s two-stop Hockenheim victory was his “craziest race ever”