Peugeot Sport takes the win after a race long battle with Audi Sport in the Autosport 6 Hours of Silverstone to take the coveted Intercontinental Le Mans Cup (ILMC) points in today’s Le Mans Series round on the British circuit. Sebastien Bourdais and Simon Pagenaud took the victory in the No 7 Peugeot 908. Second went to Marcel Fassler and Timo Bernhard in the No 1 Audi R18. Oak Racing’s Pescarolo Judd was third overall and was the top petrol LMP1 car. Olivier Pla and Alexandre Premat were the duo in the No 24 who handed Jacques Nicolet’s team their first P1 podium .

After a number of lead changes and a hard fight on the track between the two diesel-power rivals, Peugeot now has three ILMC wins. Pagenaud, who took the pole yesterday, and Bourdais stayed out of trouble to complete 190 laps when the six hours had ended. Fassler and Bernhard had their Audi were more than one minute adrift on the winning Peugeot.

It's a perfect weekend for Peugeot and us.

“This the second race win in which I have been involved this season, after the win in Imola. We had a great race, but it was difficult and very hotly contested. We had to really go for it! We didn't make the slightest error, whereas our rivals made a mistake. It’s a team win, because we have all worked together for this. I pushed when I needed to push, and Simon did his job superbly,” said Bourdais.

Pagenaud commented, “It's a perfect weekend for Peugeot and us, with a pole position and a race win. We have met all our goals. A few days ago, I wasn’t sure if I would be racing here or not, so it’s special feeling, especially as I hadn’t raced at this track before. I spare a thought for Anthony Davidson, because this is his race. He has been here all weekend to offer me advice. This win is down to the entire team and all of our partners. The drivers are the last link in the chain, we have to finish off the job, which is what we have done today.”

For Audi team, the story could been diferent as the No 1 Audi also held the lead and was going neck and neck with the No 7 Peugeot, but they had to stop again to change the rear cover costing them to lose time and giving the edge to the Peugeot.

"It was a great race. We pushed. Based on our pace we could have really been in contention for victory. The car was really good today. So it’s a real shame that I had two collisions in which the car was damaged. We simply lost too much time due to the repair,” Fassler said.

Added Bernhard on their second place finish: "I think we showed a nice race. Second place is good - but we had the potential for more. The performance was good enough for victory because we were battling for the lead across long stretches of the race. It wasn’t meant to be. We lost time in traffic as a result of me going into a spin once, Marcel (Fässer) had a collision that required a repair due to the regulations. Too bad, but I think we can still be satisfied. We delivered a good show today. And, most importantly, the team did a tremendous job of pulling together."

Third place of the race was a celebration for the fastest petrol entry of Oak Racing as Plan and Premat completed 185 laps and had a good race long battle against the Rebellion Racing No 13 entry of Andrea Belicchi and Jean-Christophe Boullion for the last step of the podium. Rebellion Racing may have lost the battle against OAK Racing but by finishing fourth, they scored the highest Le Mans Series points since the top three teams are contesting only the ILMC. 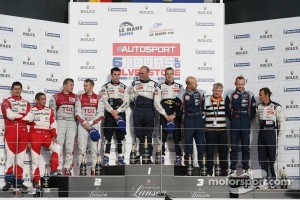 “This weekend has been perfect: good practice sessions, a good qualifying and an excellent race. The key to our success was in the triple stints which Dunlop gave us the green light to go ahead with. Olivier handed over to me when we were in third, and I was highly motivated to keep us there and finish on the ILMC podium. Jacques made the decision not to race, a tough call for someone as passionate about competing as he is, and you could see the emotion in his reaction to the result. Overall this weekend has been fantastic for the whole team, who have worked tirelessly and really deserve this podium,” said Premat.

The LMP2´s the win was taken by Greaves Motorsport Z11SN Zytek driven by Karim Ojjeh, Tom Kimber-Smith and Olivier Lombard. Greaves Motorsport finished tenth overall and a clear lap ahead of the second placed Oreca 03-Judd of Race Perfomance driven by Michel Frey, Ralph Meichtry and Marc Rostan. Third in class was Boutsen Energy Racing entry driven by Dominic Kraihamer and Thor-Kristian Ebbesvik. For LMP2 pole setter, Strakka Racing, the race was very problematic and saw them finish eighth in class and 25th overall even behind most of the LM GTE entries. Overall pace through of the HPD entries of Strakka Racing and RML were promising throughout the race weekend which could be a sign of HPD entries finally being competitive against the Zyteks and Orecas in the future.

"The victory at Le Mans this year was obviously the most important for us but this result comes close, being our home race. We deserved the win, as we had good pace all weekend, the result of a fantastic team effort. The race was difficult, particularly during my final stint, with the strong winds creating tricky driving conditions. It was really great to win at Silverstone," said Kimber-Smith.

In LM GTE PRO the win went to the AF Corse No 51 Ferrari. entry of Giancarlo Fisichella and Gianmaria Bruni. They on the level of their own and finished a lap ahead of their closest rival, Luxury Racing Ferrari driven by Stéphane Ortelli and Fréderick Makowiecki. Both AF Corse and Luxury Racing were using the Ferrari F458 Italia´s. Third in class and the final step on the LM GTE Pro podium, just six seconds behind the second place finishing Ferrari, was taken by Team Felbermayer Proton . The first of the teams using Porsche 911 RSR (997), Team Felbermayer Proton was driven by Marc Lieb and Richard Lietz. After a promising qualifying, the BMW Motorsport teams race didn´t go as planned with one of their cars having an unscheduled pit stop and the other one was suffering from the safety car period which split the group in half during the race. At the end of the 6 hours, the BMWs team finished fourth and six in class which means a handy lead for Ferrari in the Intercontinental Le Mans Cup constructors championship.