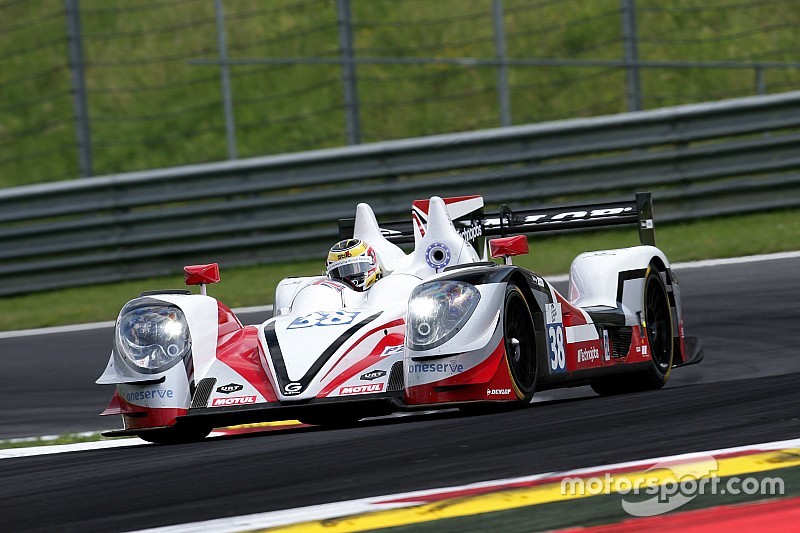 JOTA Sport heads for the penultimate round of the European Le Mans Series at Paul Ricard next weekend (5-6 Sep) aiming to consolidate its championship lead in the French race. Simon Dolan, Filipe Albuquerque and Harry Tincknell have achieved a win (Red Bull Ring) plus second (Silverstone) and third (Imola) placings in the Dunlop-shod Gibson-Nissan, three front row starts – including two pole-positions – and two fastest race laps, which combine to earn the British team a two-point series lead.

The same trio finished fourth in last year’s corresponding Four Hours of Paul Ricard – JOTA’s lowest race finish in 2014 – having achieved third-place in 2013 after starting both from the front row of the grid. JOTA Sport, along with the majority of other ELMS teams, attended an official test at Paul Ricard in March – its first test of the year with the rebranded and revised Gibson.

Simon Dolan (GB). Age 46. Born: Chelmsford, Essex. Lives: Monaco (MC): “Paul Ricard has been a bit of a difficult track for us over the years and is one of the few places that JOTA hasn’t won at! The circuit doesn’t ideally suit the Gibson very well because of the long straights. The TDS Oreca will certainly be hard to beat but there are a host of other cars that will be quick. In particular it’ll be very interesting to see how the new SMP cars fair as they seem very fast in a straight line. That said, our overall lap times will certainly be competitive and so we will be pushing flat out for our second ELMS win of the season to tighten our grip on the championship.”

Filipe Albuquerque (P). Age 30. Born & Lives: Coimbra (P): “Paul Ricard is definitely our ‘Achilles heel’ but this year’s Gibson upgrades should allow us more room for set-up changes than with the previous generation Zytek. We will use the great momentum from our Red Bull Ring victory too. In every race this season the entire team has done a great job so even if we are not the strongest in the opening phase of the Ricard race, it doesn’t mean that we can’t, and will not win. It’s a four hour race and so many things happen. The Paul Ricard track layout is very nice but the safety of the track makes everyone more comfortable to reach their own personal limit. On one side, very big run-off areas are fantastic to have should a driver make a mistake but on the other hand, it can diminish the skill factor – for example between Platinum and Silver graded drivers.”

Harry Tincknell (GB). Age: 23. Born: Exeter, Devon. Lives: Sidmouth, Devon (GB): “A driver must be smooth at Paul Ricard, so it suits my style, and it’s a tricky track to master. Both the old and new Orecas will be fast as will the SMP. Despite the Gibson updates compared to last year, we won’t be the quickest on the straight but we will be pretty quick around the corners. I qualified second and led last year’s corresponding race so we’re going to be in the ballpark. Our Red Bull Ring win was a massive result for us and there is absolutely no reason another solid team effort cannot reward us with a victory. JOTA not only has a 100% finishing record in ELMS this year, but we’ve finished on the podium in all three races and that’s where we’re aiming to stay.”

Sam Hignett. Partner, JOTA Group: “We’re really looking forward to the Paul Ricard race after what has been a long break in the ELMS season. Over the years, the Gibson has got stronger and stronger at Ricard and so we are hopeful of a good result this time to extend our lead in the Championship.”

Harry Tincknell: Back to winning ways after Le Mans