Peugeot dominates at Spa to land the victory

Peugeot won the second round of the European Le Mans Series at Circuit de Spa-Francorchamps in Belgium. The Peugeot 908 Hdi FAP driven in the 1000km race by Nicolas Minassian, Simon Pagenaud and Christian Klien crossed the line a mere 27 seconds ...

Peugeot won the second round of the European Le Mans Series at Circuit de Spa-Francorchamps in Belgium. The Peugeot 908 Hdi FAP driven in the 1000km race by Nicolas Minassian, Simon Pagenaud and Christian Klien crossed the line a mere 27 seconds ahead of the second placed No. 16 Pescarolo Sport Pescarolo-Judd driven by Jean-Christophe Boullion and Christophe Tinseau, although the narrow margin at the chequred flag did not tell the whole story in a race that Peugeot never looked in danger of losing. 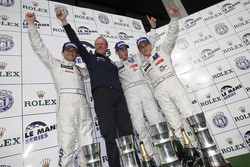 Pole winner Pagenaud commented, "It was the perfect weekend; I haven't had many weekends like this." Pagenaud drives for the team again at the 24 Hours of Le Mans in June and Spa was his a test of sorts for the American Le Mans Series racer.

The victorious No. 7 Peugeot dominated the race with a near faultless performance, only the series of safety car periods, including one at the end of the race, made the final result appear much closer.

Peugeot Team Principal Olivier Quesnel said, "With Le Mans fast approaching, today's win has done the team a great deal of good and I am very pleased with our overall performance here at Spa."

The two Peugeot cars lead the field away at the start and quickly developed a comfortable cushion. The two continued to dominate the race with the No. 7 car leading the way. By the end of the first hour the two French cars were managing the gap to the rest of the field with the lead car nearly a minute ahead of the third placed Team Oreca Matmut AIM car. The No. 9 Peugeot of Marc Gene, Alexander Wurz and David Brabham slotted neatly between the two in 2nd. The Pescarolo Judd car was in 4th with the No. 15 Kolles Audi R10 TDi of Christian Albers, Christian Bakkerud and Giorgio Mondini in fifth.

In the LMP2 class the racing remained close with the No. 31 Team Essex Porsche RS Spider ahead in an overall 7th place at the end of the first hour. The No. 72 Luc Alphand Adventures Corvette C6.R was the best of the LMGT1 competitors with the No.77 Team Felbermayr Porsche 997 GT3 RSR in the LMGT2 lead. 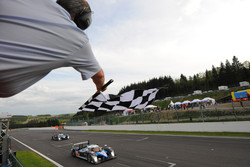 The Peugeots ran well and totally to plan, pit stopping at the 25 lap mark consistently until the lap 50 mark where the No. 9 car was pulled into the garage with suspension problems which dropped the car five laps down the leaderboard. The No. 7 Peugeot continued to lead with Minassian taking the first stint then handing over to the less experienced but still very quick Pagenaud.

Aston Martin Racing after a good showing in the previous round in Barcelona had a less smooth time. The 007 Lola Aston Martin started from the pit lane and although both initially ran well they were soon suffering gremlins and heading to the pits and down the race order. The bad luck continued with additional electrical gremlins affecting the headlights necessitating a front nose change on the No. 009 car.

After two hours of racing action, the No. 7 Peugeot continued to lead chased by the No. 16 Pescarolo now establishing itself as the lead petrol competitor a mere 22 seconds behind the Peugeot due in the most part to safety car being deployed at various points . The Kolles Audi R10 TDi had climbed its way up to 3rd with the Speedy Racing Team Sebah Lola Aston Martin in 4th and the recovering No. 9 Peugeot up to 5th.

The lead LMP2 car on the two hour mark was the G.A.C Racing Zytek while in the GT's things were unchanged with both the LMGT1 No. 72 Luc Alphand adventures Corvette and the No.77 Felbermayr Porsche 997 keeping the respective class leads.

The No. 7 Peugeot continued to behave faultlessly and lead through the three and four hour marks with the No. 16 Pescarolo and No. 11 Team Oreca Matmut AIM still chasing and swapping positions by the time the 4-hour mark had passed. 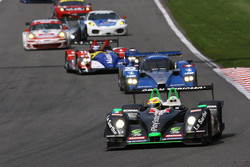 The pair continued to battle hard and by the 100 lap mark there was nothing to separate them. On the 108th lap the pair swapped positions again when the Oreca, now with Lapierre on board, tangled with a slower car at Eau Rouge spinning both. The Oreca managed to continue but the Pescarolo had sped off to eventually claim the runners up spot. To make matters worse the Lola Aston Martin of Jan Charouz, Tomas Enge and Stefan Mucke was able to close and pass the Oreca to take 3rd place, leaving the Oreca AIM to finish fourth.

The No. 009 Aston Martin made a comeback in the hands of Harold Primat, Miguel Ramos and Darren Turner to take 5th place despite Primat spinning the car towards the end of the race and suffering difficulties getting going again.

The highest placed Audi was the Narain Karthikeyan, Andrew Meyrick and Charles Zwolsman trio in the R10 TDI which came home in 6th place with the Christijan Albers, Christian Bakkerud and Giorgio Mondini Kolles sister car one position further back in seventh.

In LMP2 honours went to the Casper Elgaard, Emmanuel Collard and Kristian Poulsen driven Team Essex Porsche RS Spyder which finished four laps down in overall 8th while the Speedy Racing Team Sebah Lola Judd of Jonny Kane, Benjamin Leuenberger and Xavier Pompidou crossed the line 9th overall was way ahead of the the third and fourth placed class finishers whose results are not final due to post-race technical non compliance discovery. 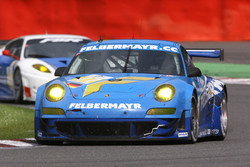 LMGT2 results on track showed Team Felbermayr Proton taking the first place; however the post-race technical inspection has their fate on hold. Marc Lieb, Richard Lietz and team owner Horst Felbermayr Sr. in the Porsche 997 GT3 RSR crossed the line first to take the top spot followed by the Ferrari F430 GT of Team Modena with the trio of Antonio Garcia, Leo Mansell and Jamie Melo. Sweeping up 3rd in class was Robert Bell and Gianmaria in the JMW Motorsport Ferrari F430 GT.

Peugeot now prepares for the June classic in France and for the Spa event, they had extra drivers learning their cars; much as they did at the American Le Mans Series season opener at Sebring. Besides their normal private testing, a full out race test is vital for any team that wants to take the victory on the La Sarthe circuit.

While the No. 7 team car was busy winning the race the No. 9 Peugeot now with Wurz on board suffered another setback when it was forced to serve a four minute stop and go penalty for a driving incident. Brabham had just handed the car over prior to the forced pit stop by the officials. It dropped the charging car back to 15th place. This effectively destroyed any hopes for a Peugeot 1 - 2 finish at Spa. The No. 9 team Peugeot recovered to 13th by the end but was seven laps down on their sister car at the end of the 1000km race.

"We came here to prepare for next month's big race and everything went very smoothly. Despite five safety car interventions, we didn't make any strategic errors," Quesnel said. "David's error prevented us from finishing first and second, but that's part and parcel of motor racing. We now have more private testing to come before Le Mans and, following today's race, I have to say that the petrol and diesel cars seem very close in performance terms."

The Le Mans Series released later in the day on May 10th that the Panel of the Stewards, having viewed the report from the Scrutineers, did hand out to four teams their official exclusion from the race. 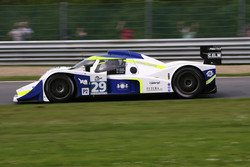 The four teams who have now been excluded include the third and fourth place LMP2 finishers: No. 29 Racing Box Lola Judd driven by Andrea Ceccato, Filippo Francioni and Giacomo Piccini. No. 32 Team Barazi Epsilon Zytek 07S driven by Juan Barazi and Fernando Rees.

Also included in the LMP2 cars that were excluded was the No. 26 Bruichladdich Bruneau Radical AER driven by Pierre Bruneau, Tim Greves and Jonathan Coleman. The team had finished 23rd overall and sixth in class.

With the three teams in LMP2 excluded, the fifth place finisher in the provisional race results belonging to No. 35 OAK Racing Pescarolo Mazda with drivers Matthieu Layahe and Karim Ajlani are now declared to have moved up to 3rd in class for their first podium in the European Le Mans.

Per the OAK Racing team's press release: "The news not only gives OAK Racing their first podium finish of the season, but also the team's first with new partners Mazda, for whom John Doonan, competitions manager for North America, was present at Spa supporting the team. It also represents a maiden Le Mans Series podium finish for Syrian driver Karim Ajlani, who joined the French team this season."

The major change came in the LMGT2 class with the exclusion of the on-track winning team from Team Felbermayr Proton. Marc Lieb, Richard Lietz and team owner Horst Felbermayr Sr. in the No. 77 Porsche 997 GT3 RSR have lost the victory.

Stepping up to the top step of the LMGT2 podium was Team Modena with the trio of Antonio Garcia, Leo Mansell and Jamie Melo in the No. 77 Ferrari F430 GT. Ferrari team ended up with a sweep of the podium as 2nd now goes to Robert Bell and Gianmaria in the JMW Motorsport F43 GT. Moving from 4th to 3rd was the No. 90 FBR team of Dominik Farnbacher and Pierre Ehret.

The results until further notice remain provisional since the four teams are allowed to appeal the decision.

Autodrome geared up for Dubai 24 Hours

Tutumlu drives his SRT Corvette to victory at Algarve