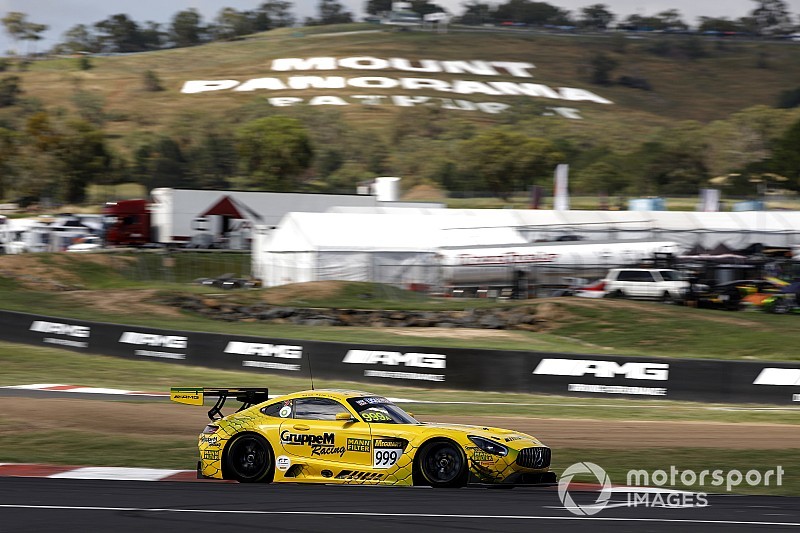 Raffaele Marciello put the GruppeM Mercedes on top in opening practice for the Bathurst 12 Hour, while three cars sustained serious damage after a dramatic morning at Mount Panorama.

The first half of the session was soaked up by a red flag stoppage, caused by a fiery crash at The Chase for Tim Pappas.

The Black Swan Porsche bounced over the sand trap at high speed before going backwards into the wall on the outside of the corner, the rear of the car destroyed by both the impact and subsequent fire.

Porsche has confirmed that Pappas is conscious and has been transported to hospital for further checks.

That meant there wasn't a competitive time posted until there was just 25 minutes left, Raffaelle Marciello straight down to a 2m06s and then down to a 2m04.968s to lead the way.

Before that time could be improved there was another red flag, this time with 11 minutes to go. A clash with Shane van Gisbergen in the #888 Triple Eight Mercedes left Paul Dalla Lana's #51 Spirit of Race Ferrari nosed into the wall, the recovery leaving just five minutes of green running at the end.

That wasn't enough for there to be any meaningful changes at the top of the order, Marciello's earlier time leaving the #999 GruppeM car on top.

The #27 HubAuto Ferrari was second quickest thanks to Tim Slade, while Christopher Haase made a late gain in the #2 Audi Sport Team Valvoline car to slot into third.

That dropped Maro Engel's time in the #77 Craft-Bamboo Mercedes back to fourth, followed by the #12 Competition Motorsports Porsche and the #888 Mercedes.

The #777 Erebus Mercedes ended up seventh, the #22 Audi Sport car in eighth, the #98 Aussie Driver Search Audi in ninth, and the #11 Objective Racing McLaren rounding out the Top 10.

Earlier in the day, Mathias Lauda topped a 30-minute hit-out for non-Gold and Platinum-rated drivers in the #51 Ferrari. That session wasn't without its dramas, though, with Pete Storey crashing the #3 Audi Sport Team entry at The Chase.