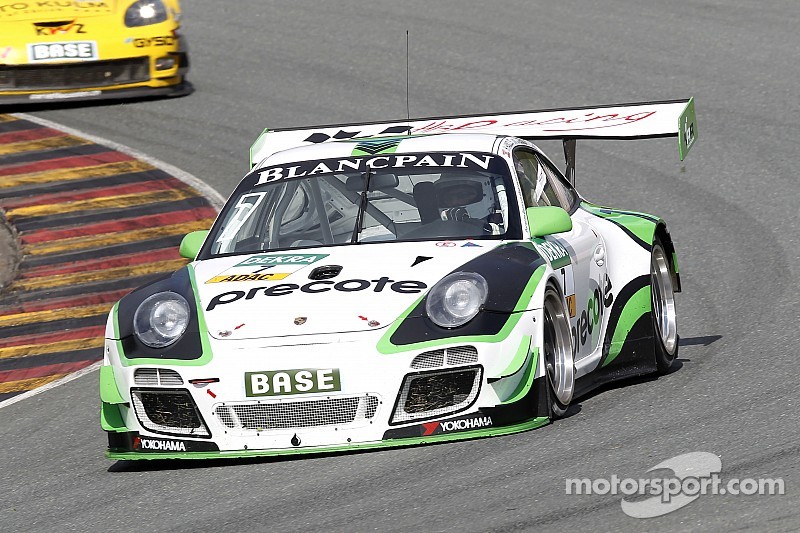 Mugello –The #7 Porsche 997 GT3 R of Herberth Motorsport won the Hankook 12H Italy-Mugello after having dominated most of the eight hours of the race run on Saturday. German drivers Robert Renauer, Alfred Renauer, Ralf Bohn, and Switzerland’s Daniel Allemann completed 342 laps of the 5.2 kilometer circuit in Tuscany.

They won by 2 minutes over the #30 Mercedes SLS AMG of Ram Racing which was driven by Tom Onslow-Cole, Adam Christodoulou, and Paul White. The Mercedes lost the lead when it was caught in the pits during a Code 60 neutralization period which came about three hours into Part II of the race. Despite some strong driving, the Ram Racing drivers were unable to make up the deficit.

The all-Porsche 997 class was won by the #7 Ruffier Racing team of Paul Lafargue, Gabriel Abergel, and Patrice Lafargue. They persevered in a tight fight with the #63 Porsche L’Orient Racing 997 Cup S. The #56 Classica Motors Porsche 991 Cup was third in class.

The #10 Hofor Racing Mercedes was a surprise winner in A6-Am when the #5 Car Collection Motorsport Mercedes suffered a late race suspension failure. The #10 Mercedes was driven by the same lineup as the teams’ third place overall #9 Mercedes. This result insures that the Hofor Racing team and drivers have made significant strides towards leading the various championship categories, including the lead of the Ladies Cup for Chantal Kroll.

NKPP Racing was the top team in A3T. Their #98 Seat Leon Cup Racer was driven by an ironman lineup of only two drivers, Harry Hilders and Roger Grouwels. The three Lebanese brothers, Razi, Nabil, and Sami Moutran along with Britain’s Phil Quaife, were second in A3T with their #95 Duel Racing Seat Leon Supercopa LR.Third in class was another Seat Leon Cup Racer, #100 of PCR Sport. That Spanish team had lost their second entry during a pre-race testing crash.

The #91MARC Cars Australia Focus rattled to victory in SP2 after being after having some bodywork and wheel problems. Keith Kassulke, Jake Camilleri, Peter Leemhui, and Ryan McLeod spent much time battling with their teammates in the #92 Focus. However, that car had even more troubles and dropped to third in class behind a steadier run by the #46 Car Collection Motorsport Porsche 997 Cup. The #96 LMS Engineering Audi TT RS2 had run strongly in SP2 for much of the race but had a late race gearbox failure.

Adrian Barwick, Bradley Ellis, and Flick Haigh won SP3 in the #163 Optimum Motorsport Ginetta G55. Another Ginetta, the #206 G50 of Nova Race, was second. This marked a good comeback for the marque as many of the Ginettas struggled earlier in the race. Third in class was the Aston Martin Vantage of Speedworks Motorsport, #170. The SP3 class was led for a long period by the #160 Cor Euser Racing Lotus Evora until it was stranded on course during the second half of the race.

The #115 K-Rejser Racing Peugeot RCZ took the top spot in A2. Driven by Adriano Stanco, Luigi Stanco, and Stefan Tanner, the team led for most of the race from the #138 KPM Racing Volkswagen Golf. As the #138 car was a diesel it takes top points for the D1 sub-class within A2. The Team Sally Racing Renault Clio fought back from an earlier deficit to also finish on the A2 podium.

The CUP1 class was composed of similarly prepared BMW M235i Racing types. Sorg Rennsport won thanks to the driving of Ulf Wickop, Anders Fjordbach, Maciej Dreszer, and Kevin Warum in the #71 entry while second place went to archrival Bonk Motorsport’s #73 BMW. The #68 Pricon Racing entry fell to third in class after having earlier fought for the lead.

Liesette Braams was on the driving strength in the #71 BMW which meant that three different women took four podium spots. The others were Chantal Kroll and Flick Haigh (1st in SP3). Kroll managed two great finishes, third overall and third in A6-Pro as well as first in A6-Am.

Hofor-Küpper Racing won the A5 class with the #75 BMW E46 M3 Coupe, driven by Bernd Küpper, Lars Zander, and Martin Kroll. They moved to the front after having repaired some crash damage. The #31 Duller Motorsport BMW had dominated the class for much of the day but had suspension and brake problems late during the race.

Zandvoort, the next race

There were six Code 60 interruptions with two due to damage to the surface of the circuit. The end of the race almost coincided with sunset although a gradually lowering cloud cover prevented a view of the beautiful surrounding hills. The 24H Series powered by Hankook now moves on to Zandvoort in the Netherlands on 28-29 May.