Main Innovation Strategy
Previous / Wolff convinced Bottas won't suffer a confidence slump Next / Analysis: Getting to the heart of what Ferrari is getting wrong
Formula 1 / News

Sergio Perez believes that drivers who cut corners in Monaco should have to take a detour before rejoining the track in order to avoid gaining an advantage. 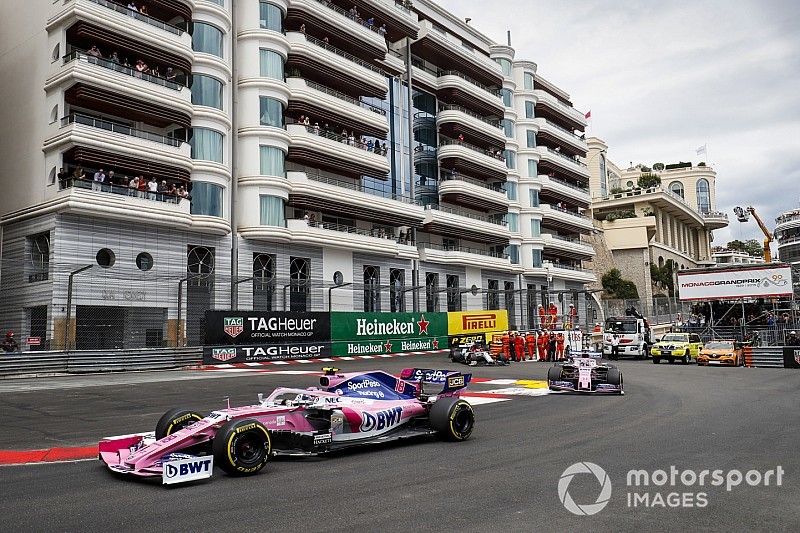 Following the pit stops, the Racing Point driver spent the majority of the race behind Haas' Kevin Magnussen, eventually finishing behind the Dane.

He did attempt a pass up the inside of the Nouvelle chicane, and when both tried to turn the corner, Magnussen bailed out of the corner and cut across it.

The result was a five-second time penalty for the Haas driver, who was judged to have gained an advantage by cutting the corner and preventing a loss of position.

Instead of investigating the incident straight away, the stewards elected to find a solution after the race, meaning Perez was forced to follow Magnussen to the flag.

Perez said that the decision to punish Magnussen after the race came far too late and lost him the opportunity to make further progress.

“I tried a move on Magnussen. He cut the chicane and just got a warning.

"It wouldn’t have changed anything, but it’s very disappointing because you only have one move in Monaco. You do it, the car cuts the chicane and he’s aware that you’re there.

“They [the stewards] took far too long [to make a decision]. Even if they take the decision that I get the position back from Kevin, it doesn’t really help me. If I had moved up a position, it could’ve changed my whole race.”

He added that forcing corner-cutting drivers to go around an extra chicane or detour might further discourage them from preventing a loss of position.

“It’s definitely something we’ve got to speak about. In all fairness to the car ahead [Magnussen], he gave space, but then has nowhere to go.

“I think there has to be a little chicane or something so that the people who cut the chicane should be losing some time, but it’s something we have to review in the coming races.”

Making drivers rejoin a circuit by going around cones or bollards isn't new in Formula One. At the  Spanish Grand Prix, Romain Grosjean was forced into cutting turn two several times, where drivers have to return to the track after passing a cone, instead of potentially rejoining on the racing line.

Analysis: Getting to the heart of what Ferrari is getting wrong