Ayrton Senna’s victory in the 1993 European Grand Prix at Donington Park is quite rightly lauded as one of the finest of his glittering career, and the opening lap in particular is held up as perhaps the best-ever in Formula 1 history.

“It was a race like old times – going hard, from the heart. I had to be smart over when to press the rhythm, and when to hold back. It was a fantastic race. I am happy for all of us. Not just for me, but for the team and staff. It was a dream. God knows, and when he wants something, then nothing can stop it.”

The quote above was given to Brazilian television, delivered in Senna’s native tongue which gives an extra dimension to his personal makeup – he was not only driven by an utter self-belief, but a spiritual element for good measure.

Ranged against the technically superior Williams-Renault FW15C V10s of Prost and Hill, Senna produced a devastating first lap and scored victory by an incredible 1m23s in his V8-powered McLaren-Ford MP4-8. 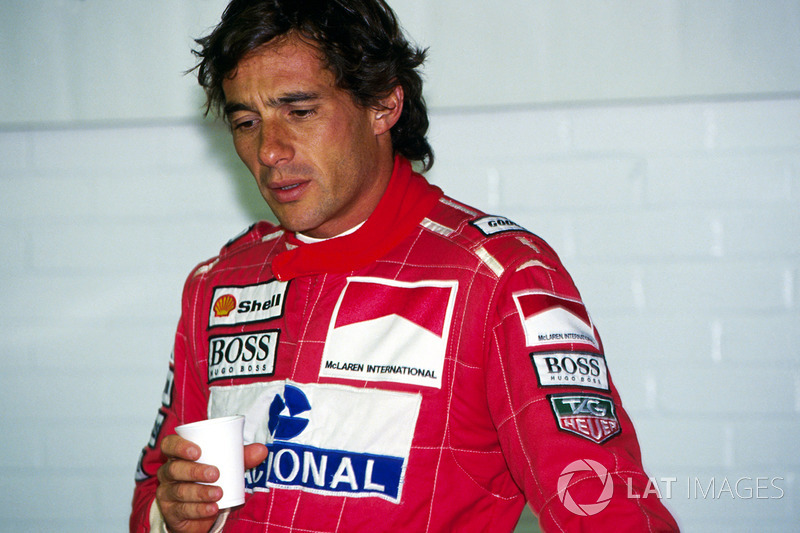 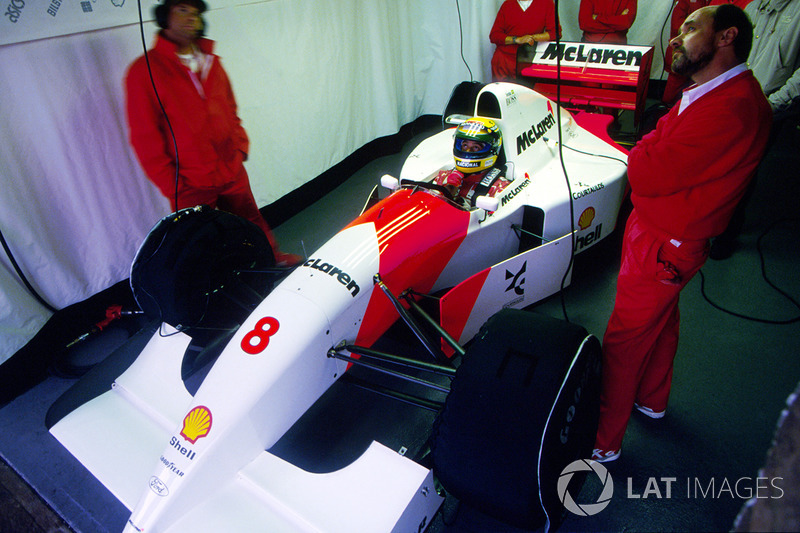 Before the race, Senna had warned of “some controversy on overtaking” given Donington’s relatively short lap, lack of straights and narrow confines, but raceday’s torrential rain – which had just about abated before the start time – not only opened his opportunities, but took away some of the Williams’ advantage.

Having qualified fourth in the dry, 1.649s off Alain Prost’s pole-sitting Williams, Senna sensed this was a race that should be taken by the scruff of the neck – but he’d require his wet-weather skills, superb feel for ever-changing grip levels and all his guile to do so. 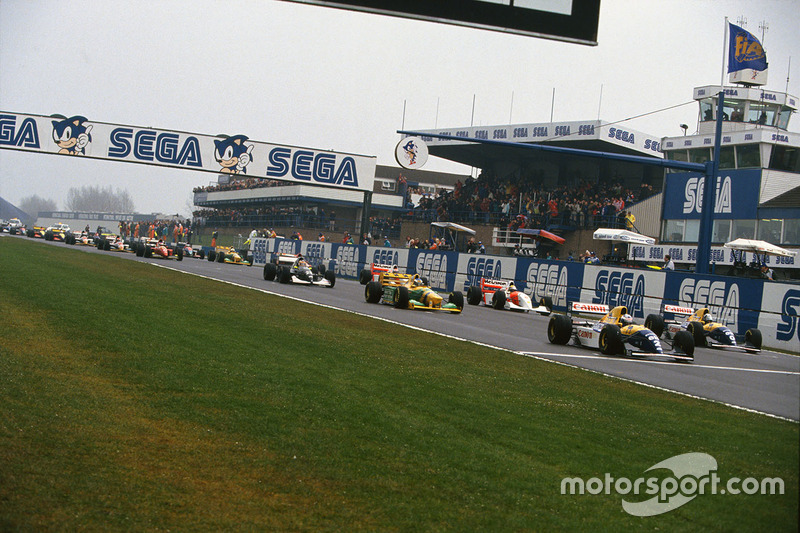 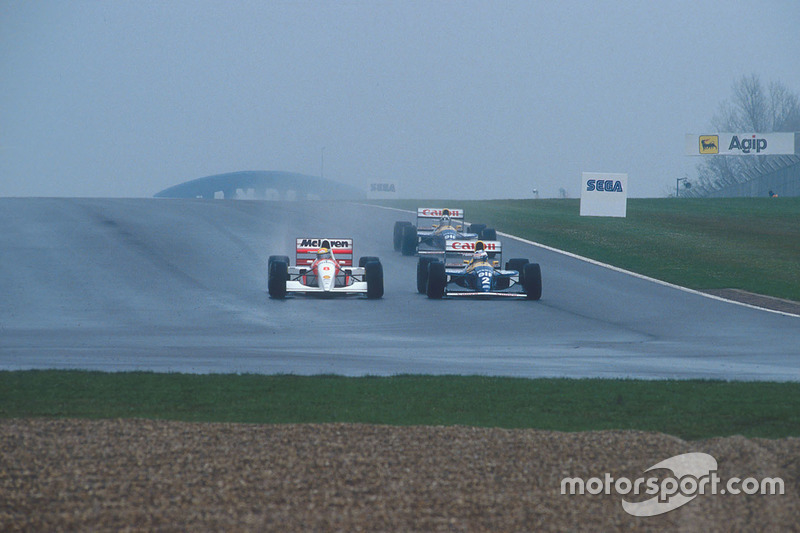 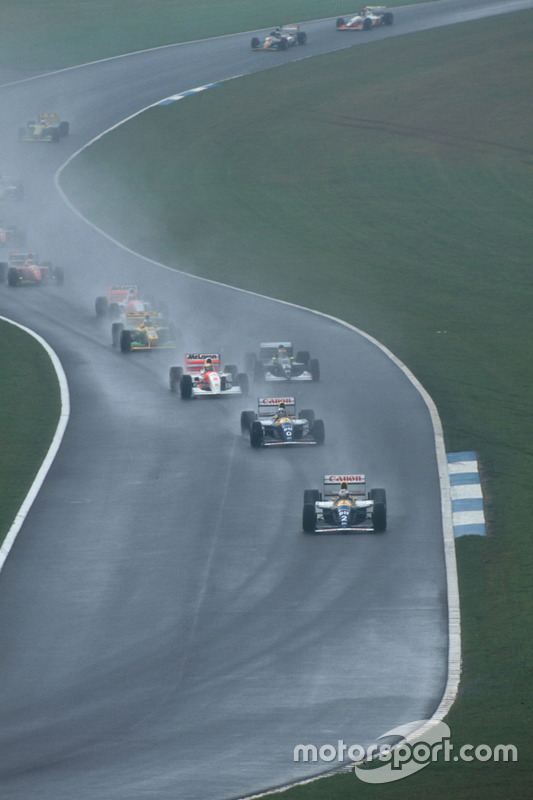 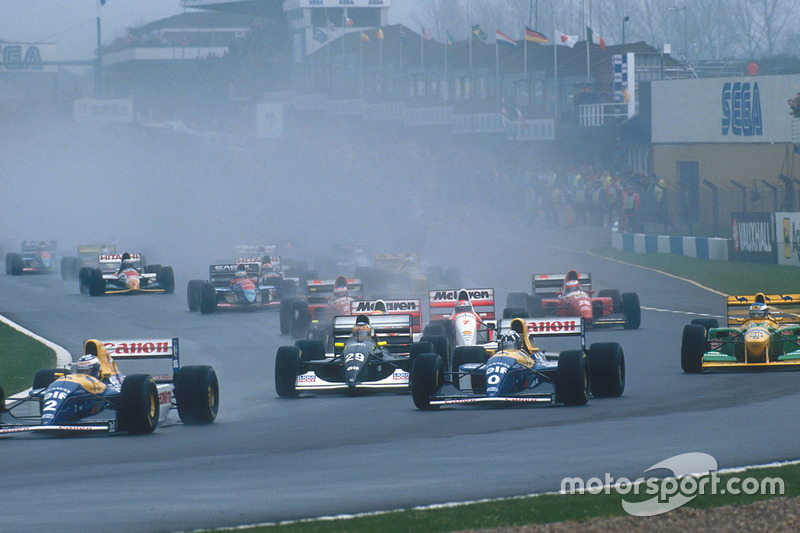 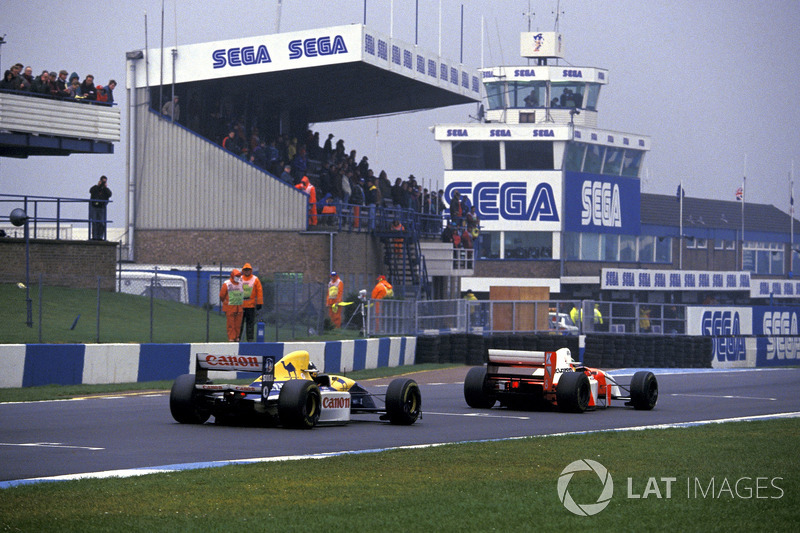 Elbowed aside by Michael Schumacher’s fast-starting Benetton, Senna briefly fell to fifth into Redgate, the first corner, but then began his charge. He passed Schumacher on the exit of Redgate, swept around the outside of Karl Wendlinger’s Sauber down the fearsomely rapid Craner Curves, then dived underneath Hill at McLean’s – skirting the white line as ducked out from behind the ball of spray in front of him. [I know, because that’s where I’d chosen to watch from, and clicked the shutter on my dad’s borrowed Olympus camera just as he did so! – Ed]

Prost, who later claimed to be suffering from gearbox problems from the start, was several lengths ahead, but Senna was on him quickly. The McLaren outbraked the Williams into the Melbourne hairpin and took the lead. [From my vantage point, the roar of the crowd over the engines told me as much, and Senna was well clear of Prost as he whistled past me on Lap 2 at a rate of knots that seemed to be in a different league to those following, quite literally, in his wake – Ed]

“The opening minute had been breathtaking, but somehow you felt that the race was already over,” wrote Nigel Roebuck in Autosport’s race report.

After four laps, Senna was 7s clear of Prost but, as the track dried, that started to creep down. Senna came in for slicks after 18 of the 76 laps and had a lead of 5.1s after Prost came in the next time around. Then it started to rain again and Prost, then Senna, came in, only for the track to soon dry and force both back in again! Senna’s third stop was slow and so, at half-distance, it was Prost who led by nearly 6s. Nobody else was in the same zipcode by now.

The rain returned and both Williams drivers came in for wets. This time Senna stayed out and he extended his lead as the track quickly started to dry once more. On lap 48, Prost came in from second to switch to slicks, but this time stalled and the FW15C got stuck in gear. This dropped Prost to fourth and he pitted again just five laps later, believing he had a puncture.

Senna had his one piece of good fortune on lap 57, when he came in with the intention of changing to wets but the team wasn't ready and waved him through. “I think they told me to come and I didn’t come,” recalled Senna later. “Then I told them I was coming, and they weren’t ready. So I had to go through!” 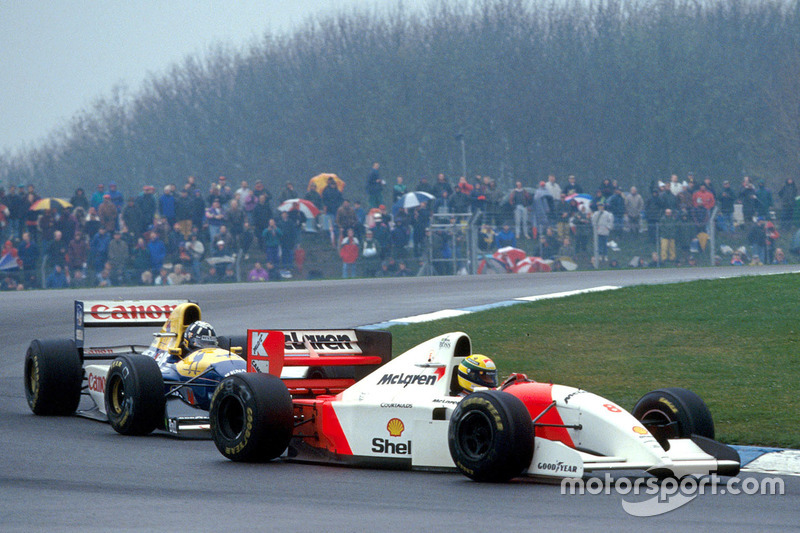 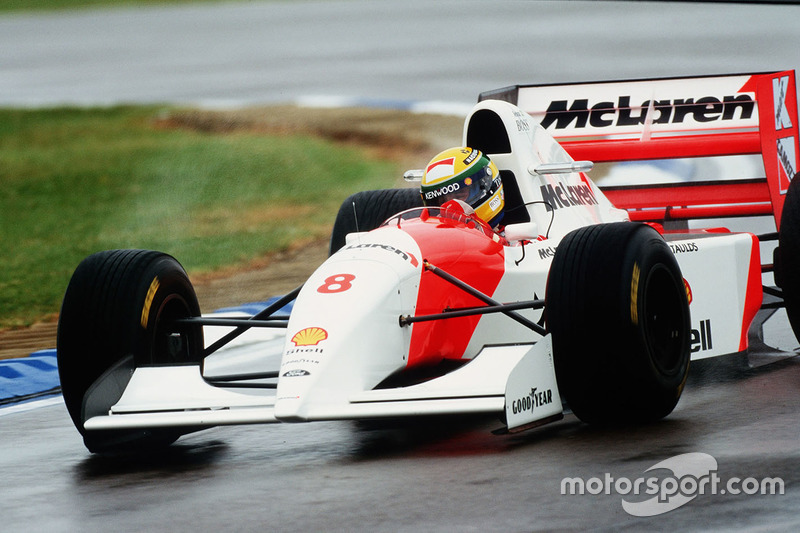 The entry to pits at Donington essentially shortcuts the final corner, so the outcome was a fastest lap – and an outright circuit track record – of 1m18.029s. His next-best tour was 1m20.413s, slower than both Prost and Hill!

On returning to the track, Senna changed his mind and stayed out until the rain really returned with 10 laps to go and he made his fourth actual stop. Hill and Prost came in shortly afterwards, meaning that Prost had now stopped seven times.

Senna came home to take his 38th F1 victory. Everyone except Hill had been lapped…

“This was Senna at his most majestic,” enthused Roebuck. “His drive I thought mesmeric, beginning to end, for it seemed to contain every card to which a racing driver's hand can aspire. It was a victory as consummate as they get. While the Williams drivers never got the dry conditions in which to assert their car's superiority, their cause was scarcely aided by a run of tyre stops which proved uncannily out of sync with what the weather gods had in mind.” 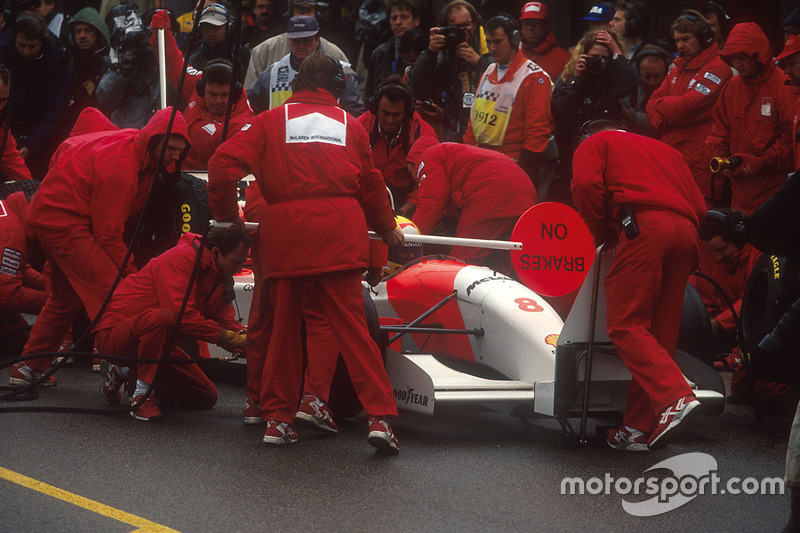 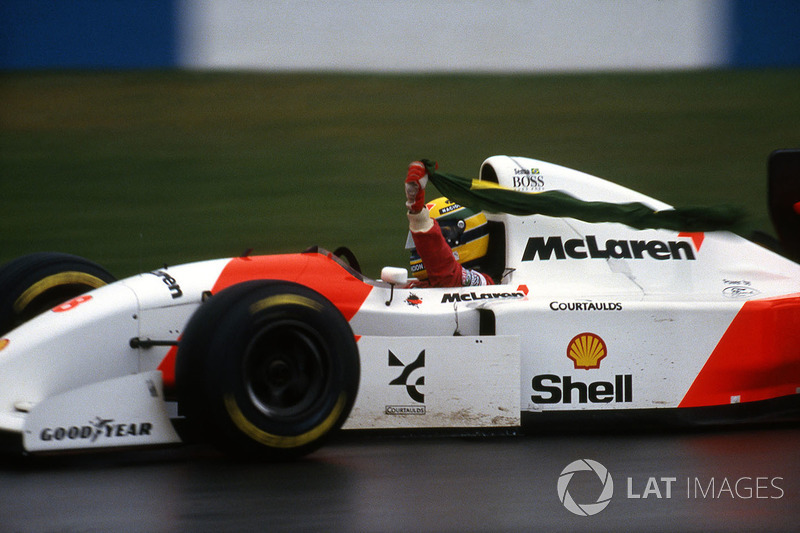 Senna said: “I am speechless, really over the moon! Conditions like this is gambling, and it’s taking chances that pays off. I think we gambled good and we got the result.

“At the start I decided to really go for it, before Williams had the time to settle down. They do have technical superiority and we felt this was the best tactic. And then so many things happened that I find it hard to remember. On the slow pit stop something went wrong on the right rear wheel [when the nut became cross-threaded], but those guys are really under pressure. It's motor racing.

“I don’t know how many times we stopped for tyres, it was surely the record in any race for pitstops. Driving with slicks in damp and really slippery conditions was tremendous effort, you just don’t get the feeling from the car and you just have to commit yourself to certain corners, and you just can be off.”

During the post-race press conference, Prost regaled his woeful race: “I stalled the engine at one stage, I lost maybe 13 or 14s. I made some good [pit strategy] decisions at the beginning, to stop at the right time. But then, as soon as I put the slicks on, the car was absolutely undriveable.”

Senna, who was sat next to him, made Prost’s day even worse when he suggested: “Perhaps you should change cars with me?” 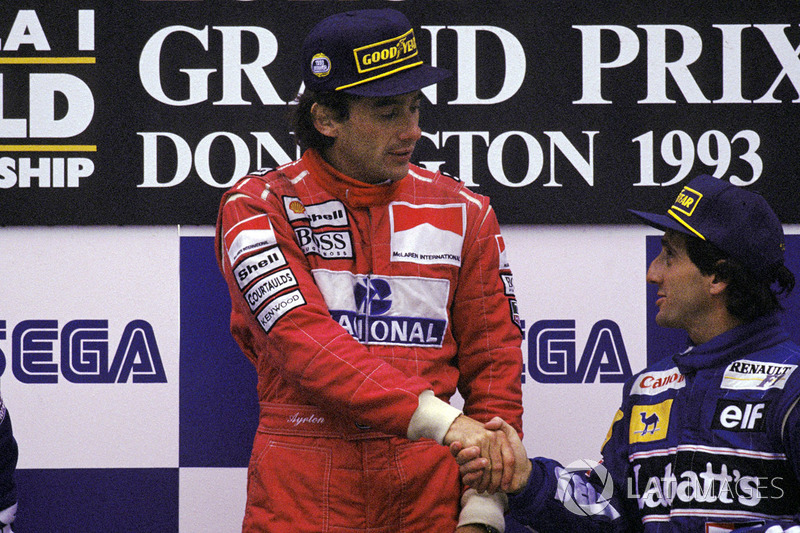 Andretti wants to give American drivers "legitimate shot" in F1