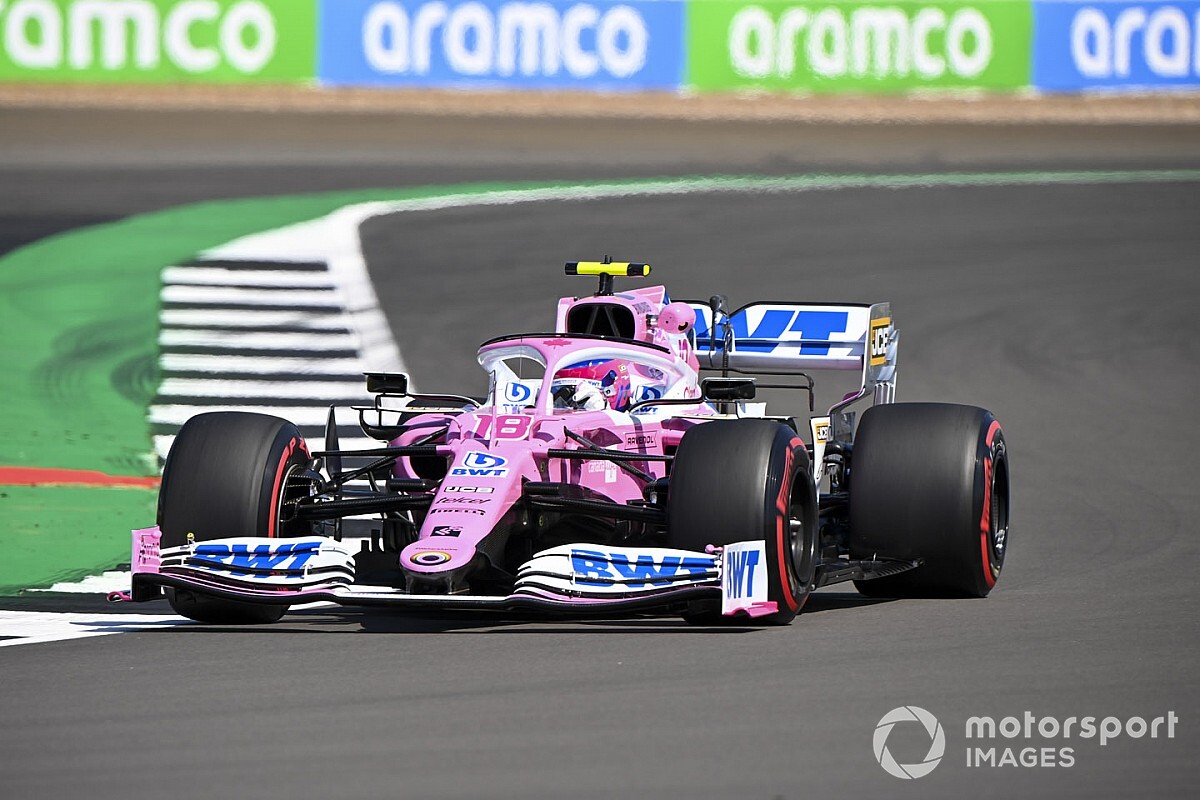 Valtteri Bottas and Lewis Hamilton finished third and fifth – either side of Ferrari's Charles Leclerc – while Max Verstappen ended up 14th in the other Red Bull after an angry altercation with Romain Grosjean on his own soft-tyre effort.

In 36-degree heat at a sweltering Silverstone, the action took a while to get going for the second 90-minute session of the day.

Renault's Daniel Ricciardo, Grosjean and the Alfa Romeo pair Antonio Giovinazzi and Kimi Raikkonen enjoyed brief spells at the head of the times during the early running before Leclerc moved to the top with a 1m28.773s on the medium rubber.

But shortly after posting that time Leclerc was pointing backwards at the exit of the Loop after losing the rear of his SF1000 as he accelerated and spun just past the exit of the left-hander.

Verstappen and Albon then demoted Leclerc on their mediums before Bottas sealed the fastest time on the yellow-walled C2 Pirelli rubber (that had been the hard compound for the opening three races of the season) with a 1m27.731s.

Approaching the halfway point, the pack began switching to their qualifying simulation runs, led by Albon, who moved back to the top with a 1m27.363s that put him 0.3s clear of Bottas' best on the harder rubber.

But Stroll then eclipsed that time with a 1m27.274s, despite dipping the left-front wheel of his RP20 onto the grass through Chapel as he shot onto the Hanger straight.

Verstappen was rapid early on his soft-tyre effort, but he came across Grosjean running slower through the Maggots/Becketts complex and pulled up, gesturing his fury to the Haas driver, who called Verstappen's reaction "childish" over his team radio.

The Mercedes drivers then fitted their soft tyres but could not match Stroll and Albon, with Bottas' best putting him third 0.157s adrift of the top spot, with Hamilton and further 0.15s behind.

But their runs were interrupted at the session's halfway point when Albon lost the rear of his RB16 as he reached the apex at the Stowe right-hander and as he corrected the snap of oversteer his car speared left and around, sending him backwards into the barriers.

The impact heavily damaged the rear and left-hand side of the car and brought out the red flags and he did not return to action after being collected by the medical car.

The action restarted after a 10-minute delay, with Hamilton again going for a flying effort on the softs.

But the world champion abandoned his lap after running deep at Brooklands and thereafter the field switched to long-run data gathering.

Carlos Sainz finished sixth ahead of Nico Hulkenberg, who wound up 0.636s adrift of his team-mate's session-leading time in his second practice outing for Racing Point in place of Sergio Perez.

Pierre Gasly, who along with Lando Norris had a slow early time deleted for running wide at the exit of Stowe, took eighth for AlphaTauri, with Ricciardo and Raikkonen rounding out the top 10.

Verstappen had complained about understeer during the initial running, and Red Bull spent time working on his car after Albon's crash, but the incident with Grosjean meant his best time remained his 1m28.390s that was set on the mediums.

Sebastian Vettel's disrupted Friday continued as he missed a chunk of FP2 while Ferrari changed the pedals on his car after he had reported something being loose in his cockpit.

That meant he remained rooted to the foot of the times with just eight laps completed until more than an hour of the session had passed, after he had missed almost all of FP1 with an intercooler issue that was fixed ahead of FP2.

Vettel finally ventured back out on the soft tyres with just over 25 minutes remaining, but a scruffy lap – that included running wide at the exit of Woodcote and through Chapel, scattering gravel and dust at those respective points – meant he only improved to P18.

Nicholas Latifi also spun as he ran through Stowe in the session's final moments, but his moment occurred further around the corner, which meant he did not fly deeper into the runoff and was able to drive away.

The Williams driver finished 20th and last in the standings.