A Formula One team is all about the people, but away from the racing what makes our team members tick? Red Bull Racing Team Principal Christian Horner reveals that he’s lightning on a lawnmower and that his dream dinner would be a very serious occasion…

How do you relax outside of F1? What’s your idea of a perfect day off? The perfect day off for me is being at home. I live in the countryside, not too far from Silverstone, and I just enjoy spending time there, especially if it’s nice outside. We have quite a few animals, so it’s nice just to spend time there and chill out. 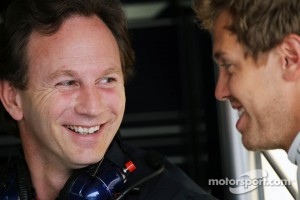 Do you have a favorite animal? Of course I don’t! We’ve got 14 ducks and last week two more ducklings arrived. We’ve got 16 chickens, three dogs, and two donkeys. I think that’s about enough for now.

Is there one thing aside from your job that you think you’re really good at? I’m not bad on the lawnmower! I don’t know… you don’t get a lot of down time in Formula One. I enjoy playing tennis, but I wouldn’t say I was particularly good at it. I do have a private pilot’s license for helicopters, which is something I enjoy.

If you were having a dinner party, which three people would you invite? I reckon [mayor of London] Boris Johnson would be quite good fun. Then Winston Churchill and lastly a lady: Margaret Thatcher. Let’s make it a political evening, very lighthearted!

If you weren’t working in the field you are in, what would you be doing? I have no idea. I grew up in the sport. I started life as a driver and then turned my focus to management. I never had a ‘proper’ job. I did a deal with my parents when I left school at 18 to not go to university but to take one year out. So far I haven’t been [to university], so hopefully I’ve avoided it for good now.

What’s the best piece of advice you’ve ever been given? I was once told ‘Don’t f* it up’ by Bernie Ecclestone!

Schumacher will start from the second row for the German GP