How Honda plans to build on F1 breakthrough 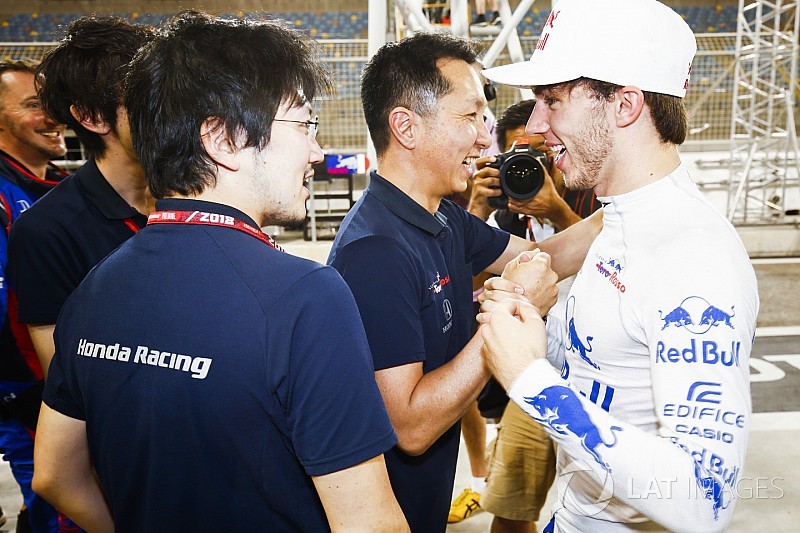 Honda will step up the development of its Formula 1 engine’s performance after scoring the best result since it returned to F1 in 2015 last weekend.

Pierre Gasly’s fourth place for Toro Rosso in Bahrain last weekend was better than anything McLaren managed in three trouble-hit years with Honda power before swapping engine suppliers with the Red Bull junior team for 2018.

Honda’s F1 technical director Toyoharu Tanabe told Motorsport.com he wants the result to “give us much more energy to develop for the future”.

Motorsport.com understands Honda is targeting a step of around 27bhp for the Canadian Grand Prix in June.

Tanabe said the internal combustion engine is “one of the biggest components to improve from the development point of view”.

He added: “Our development is not only reliability, it is performance. We need to find the balance point.

“When you push too much performance you pay sometimes. Or you don’t push very much, still you fail sometimes.

“It’s difficult. But we will try to achieve both.”

As well as advanced combustion technology, Honda still needs to improve the energy recovery systems on its V6 turbo-hybrid.

Energy harvested from the MGU-H and MGU-K can be stored by the battery and deployed by the MGU-K to a certain limit per lap.

However, the MGU-H can also feed energy directly to the MGU-K for unlimited deployment, with Honda often suffering on end-of-straight speed because of limitations in that package.

Tanabe said it was “very difficult” to say how much progress had been made with its energy recovery systems, but suggested in Bahrain it had worked out how to maximise the performance it currently has available.

“After Saturday’s practice session our engineers discussed how to use the system with the drivers,” he explained.

“We decided a detailed strategy and I believe that worked [in Bahrain].

“We finished two cars this race. That’s one of the most important things of the weekend for us. The fourth place we got was a result of finishing the race.”

Key said getting reliability “under control” would be crucial to Honda’s development plan, and was buoyed by Honda’s response to Gasly retiring from the season opener in Melbourne.

Problems with his MGU-H and turbocharger damaged the internal combustion engine in Gasly’s car, so Honda launched a dual investigation trackside and back at its Sakura research and development facility, where the parts were sent for further analysis.

It produced a fix in time for Bahrain, with Brendon Hartley’s components also changed as a precaution.

Tanabe could not say the problems were “100% fixed”, but “from our information we have now we assume we’ve fixed it”.

He also revealed its years of problems with McLaren helped facilitate the rapid turnaround.

“From our experience since 2015 we had a lot of failures,” said Tanabe. “That experience helped us fix the problem in a short time as well.”