F3000 Coloni driver Zsolt Baumgartner discusses his last race, in Austria, and his future as Jordan F1 test driver. Q: You made a good start and you passed some cars before the first corner. What happened after that? Hungarian driver ...

Q: You made a good start and you passed some cars before the first corner. What happened after that? 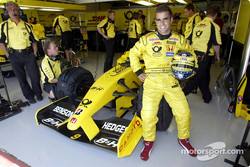 Hungarian driver Zsolt Baumgartner did a couple of guest laps in the Jordan EJ12.
Photo by Jordan Grand Prix.
Zsolt Baumgartner: Yes, I made a really good start and I managed to pass some cars. In the first few corners I fought for the sixth place with Toccacelo but finally he passed me. After that I had a mechanical failure. The rear suspension went wrong and something broke in it. Thus the rear running gear did not work properly, so the rear tyres wore very quickly. Then they overheated, so by the end of the race they had completely lost grip. I didn't manage to drive as fast as the situation would have required.

Q: The mechanical failure happened in lap 10. What did you feel in the car?

ZB: I felt that the car started to slide and I couldn't keep the car in the racing line. My car's performance dropped about one second compared to that of the competitors. It was very disappointing.

Q: At the beginning of the race you had a big fight with Toccacelo. Do you think that if you had not had a mechanical failure, you could have achieved a higher position?

ZB: I don't know whether I would have been able to pass him if my car had gone well but the fifth or the sixth place was in view.

Q: What was your team principal's opinion about the race?

ZB: They were disappointed although my team-mate won the race. They were sorry about my race because it was my best grid position so far this year and I made a very good start.

Q: It is rumoured, that your manager Tam?s Frank talked to your team principal. What was the subject of the conversation?

ZB: After the race, we did not know what had happened. But then the car arrived to the garage and it turned out that there had been a mechanical failure. Then Tam?s Frank told the team management off because they should have looked after more carefully. I had too many failures in the past races.

Q: Last week you signed to the Jordan Formula-1 Grand Prix as a test driver. This is a very big opportunity, which can open for you the door to the Formula One. How do you prepare for this?

ZB: This is a really big opportunity and I will not miss it. But at the moment I absolutely have to concentrate on the Formula 3000 series before I fly to the team headquarter in Silverstone. I will try to ignore this announcement, although it will be difficult. While I am there, the team will prepare me for the job. After that I don't think that I will have any difficulties. The team and the mechanists will tell me how and what I will have to change in my fitness program in order to mach the level needed in the Formula-1 tests.

Q: What did your colleagues say when you flow back to Austria?

ZB: The team was very happy for that and they were proud of me. My race colleagues congratulated and said that it was such a big opportunity that I had to take advantage of. That was all because they know that it is a serious thing, especially before a race like that, when everybody looks at your performance more critically.

Q: Silverstone, Hockenheim, Hungaroring. These are the three tracks where you will be testing.

ZB: I have to say I will be driving in the Friday test in the Hockenheimring and in the Hungaroring. The team's official test track is in Silverstone and there will be a test, where I will also take part as a tester.

Q: The next event will be in Monaco where we expect a tough race. What do you expect from the race?

ZB: I expect that I will be in the top 10 in the qualifying. I would like to be higher up in the grid than I was in Austria because I want to improve. During the race I would like to do my best because the most important thing is to finish the event. The first corner will be the key moment of the race. It is very important to survive the start.

Formula One In For A ‘Hot’ Race At The Hungaroring