Mercedes has introduced an aggressive update to its rear wheel design at the Belgian Grand Prix as it bids to seek further gains in its battle with Ferrari.

With little separating the two world championship contenders, Mercedes has left no stone unturned in finding ways to improve performance – and the wheels have now come under its spotlight.

The tweaks to its rear wheels that have appeared at Spa-Francorchamps are aimed at both aero improvement and to help better manage the temperature of the brakes and tyres.

With tyre temperatures such a key element of performance these days, teams have long experimented with ridges on their rims.

As the below image of last year's Red Bull RB13 shows, the Milton Keynes-based team has run a ribbed surface on the outside of its rims for some time 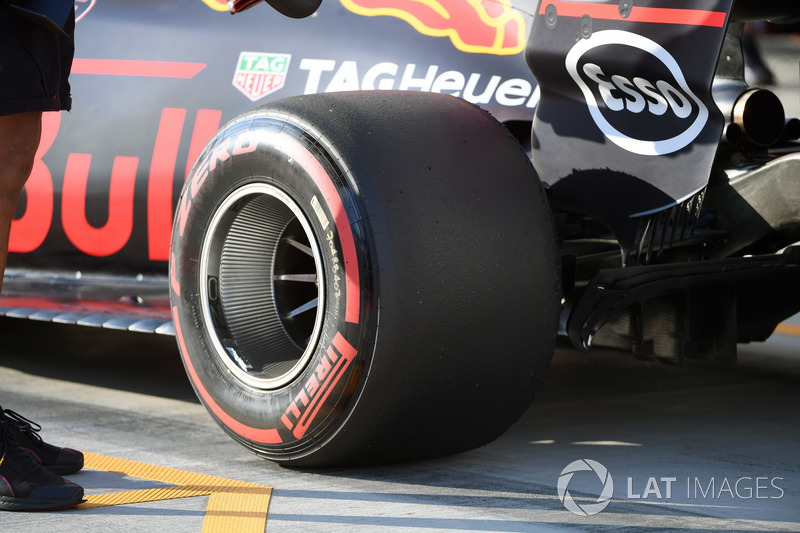 The main function of this design is to act as a heat sink – as the more surface area there is on the car, the more cooling potential there is.

Mercedes has run the ridged heat sinks on the inside of its wheel rims for a long time, but its move in Belgium sees the team introduce an aggressive set of ridges around the outside area too.

The rotation of these ridges helps to draw airflow through the wheel and move hot air away from the brakes and that area of the car.

One benefit of this is that is should help with the management of rear tyre temperatures, something that has been a critical area of performance for the team in 2018.

Early indications from Friday practice at the Belgian GP suggest that Mercedes is running with rear tyre temperatures lower than usual, which suggest the new rims are working as expected.