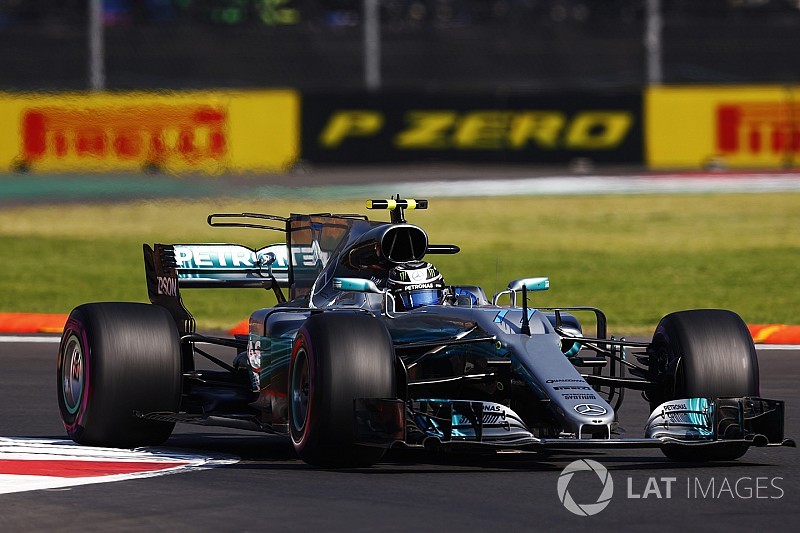 Bottas clocked a 1m17.824s on the ultrasofts to finish 0.466s clear of Hamilton, with Red Bull's Max Verstappen a further tenth adrift in third.

Bottas set the early pace on the supersofts, clocking a 1m19.614s, only to be deposed by Verstappen on the softs by half a tenth.

Hamilton moved to the top of the timesheet briefly before Sebastian Vettel became the first driver to dip into the 1m18s with a 1m18.824s on the supersofts.

Mercedes then turned its attention to the ultrasofts, with Bottas going quickest with a 1m17.824s and following that up with a second lap just 0.012s slower.

His teammate Hamilton was 0.789s off on his first run on the ultra-softs, losing time in the final sector.

Next time around, the championship leader had a slow middle sector, but closed the gap to just under half a second.

Ferrari and Red Bull opted not to run the ultrasoft tyres, saving them for the second session, and instead did their running on either the supe-soft or soft.

Kimi Raikkonen was sixth, four tenths slower than Vettel, with Sergio Perez using the ultrasofts to end the session seventh in front of his home crowd.

There was frustration for the other Force India when Alfonso Celis Jr crashed at the final corner to bring out the red flag.

Celis, who was borrowing Esteban Ocon's car for FP1, lost the rear on entry to the final corner and hit the wall on the outside with the left-rear, breaking the rear wing.

Fernando Alonso, who will take a 20-place grid penalty for Sunday's race after engine component changes, was eighth, with Felipe Massa and Nico Hulkenberg completing the top 10.

Kevin Magnussen spent most of the session in the garage after the team discovered a water leak but got out in the closing minutes to clock the 13th fastest time.

Pascal Wehrlein was an impressive 14th quickest, ahead of both Toro Rosso drivers and half a second ahead of teammate Charles Leclerc, who was stepping in for Marcus Ericsson.

Brendon Hartley stopped out on track reporting an engine problem and though he managed to get his Toro Rosso going again to return to the pits, he didn't complete any further running.

He was 18th fastest, a tenth adrift of Sean Gelael, who was standing in for Pierre Gasly for this session.

Stoffel Vandoorne failed to set a time after Honda detected a potential issue in his engine data.

It came after Honda completed a full engine change ahead of the session in a bid to have relatively fresh elements for the final two races of the season.

When Honda detected the problem during FP1, it decided to revert to an older specification from Vandoorne's pool, which means no further penalty, while it investigates the issue.