Main
Previous / Vandoorne flying to Bahrain, but unsure about Mercedes' plans Next / Todt made sure Grosjean spoke to wife in medical centre
Formula 1 Special feature

We like to hear the fans’ voices on the key topics in Formula 1 and in our latest survey, of Motorsport.com and Autosport.com audiences globally we got some fascinating answers.

So for the latest #ThinkingForward we convened a round table with three key thinkers on motorsport business and strategy to go through them. The full analysis is in the accompanying video.

Jon Noble is F1 Editor of Motorsport.com, Rodi Basso, a former MD of McLaren Applied Technologies where he developed the single-race Formula E battery, he now heads the sustainable E1 electric powerboat series and Mark Gallagher heads motorsport business firm Performance Insights, is a columnist of GP Racing magazine and has held a number of key roles in the sport including head of Cosworth engines and F1 team commercial director.

We start with the cost cap and a resounding 75% of our readers are in favour of it. 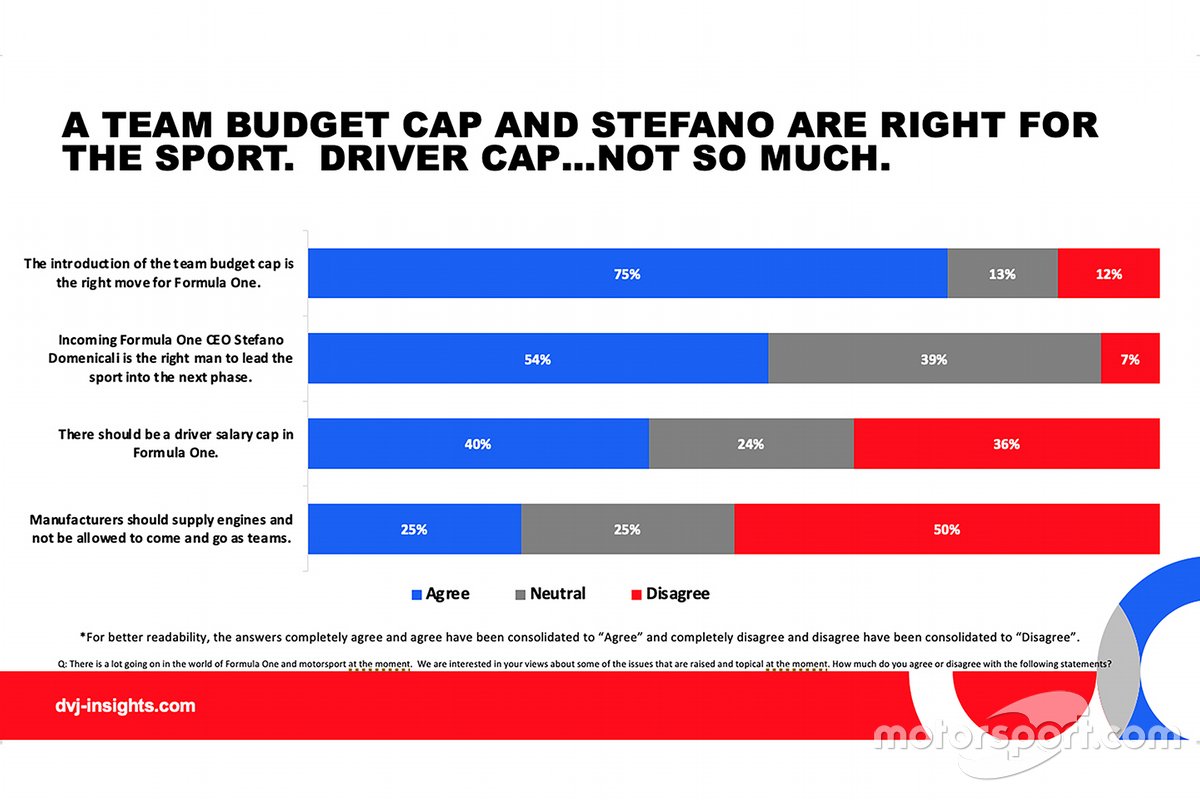 “There was an attempt to bring the cost cap in a few years ago,” says Noble. "The idea didn't really generate the support at the time; concerns about teams finding ways around it. But it's now arrived, it's agreed. Obviously, there are some details to come in. It's still a very high level. But it seems that the fans are supportive of it, I don't think it will be detrimental to the sport. So I think it's a good step."

Basso adds: “Every strategic action has some cons and risk. One or one of those is how Formula 1 and Formula E will be now within the technology competition landscape. But this is something very interesting to monitor in the future.”

Support for a driver salary cap was less strong with only 40% in favour and 36% against.

“I suspect it's not really a practical consideration for most fans that have never had that to confront what it's like to pay someone a million pounds a week or a month,” says Gallagher, adding that due to Covid 19, “There is no doubt that on the far side of 2020, we're going to have a world of scarcity in terms of budgets and available resources.”

Support from fans for the incoming CEO of F1, Stefano Domenicali is high at 54%, with only 7% thinking he’s not the right man for the job. 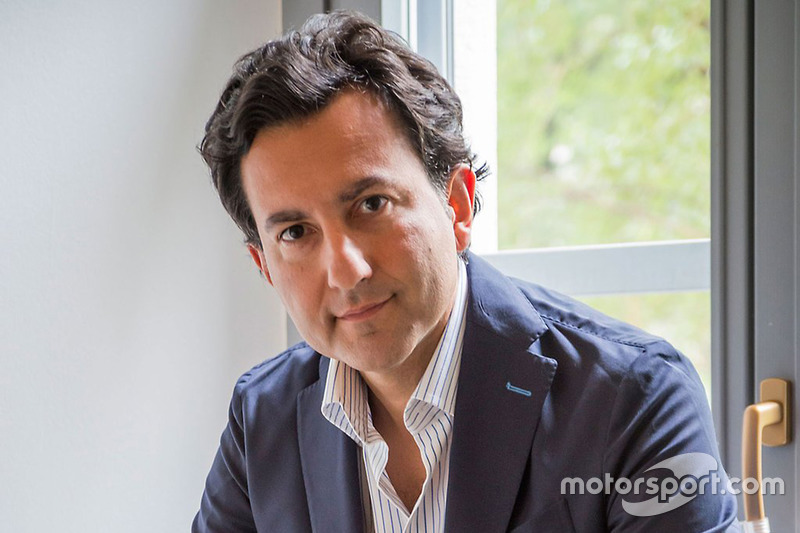 Basso worked with Domenicali at Ferrari in the Schumacher era as a race engineer and agrees with the fans, “All the people in the survey, from 30-40 or older, are absolutely supportive of this move because of his domain knowledge. He knows very well the culture of the industry, the culture of the competition. He knows all the people and he's very well respected. So there is a lot of hope in Domenicali addressing the future of Formula 1. And I will personally agree with that.”

Challenged on whether manufacturers should not be allowed to come and go as teams and just be engine suppliers, there was strong support for manufacturers with only 25% agreeing with that statement.

“That ebb and flow of manufacturers in and out of Formula 1, it's actually part of the story, it's part of the fabric,” says Gallagher. “The fans do get the fact that manufacturers have been pivotal to the history of Formula 1. And I suspect there's some fear that the changes that are happening in mobility and transportation around the world might mean that Formula 1 somehow becomes irrelevant to car manufacturers.” 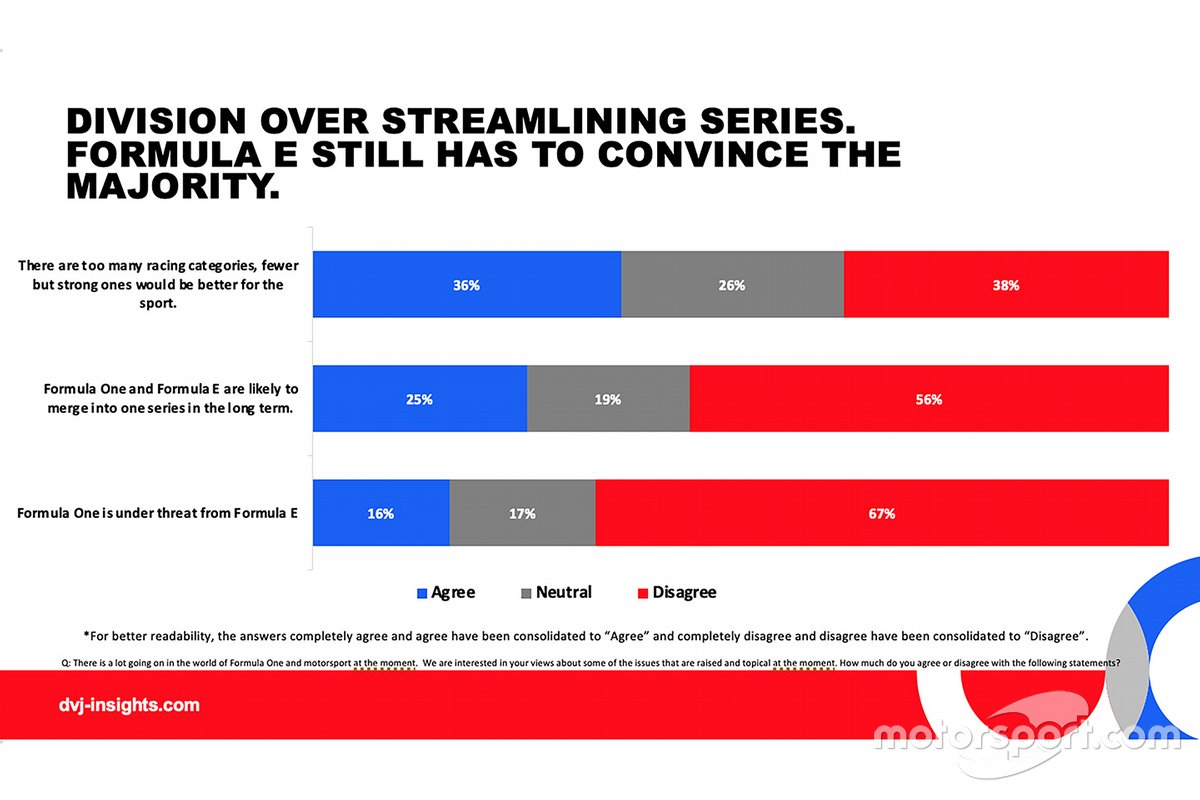 On the question of the long term threat Formula E poses to F1, 67% of fans said that the all-electric series was not a threat.

But Basso thinks that in the long term things will come to a head: “I'm a bit surprised by these results. It really depends on the timeframe so if we talk about the next 10 years, this is understandable. I think there is enough space for the two categories to still compete on different fields.

"One is full electric competition and street events. The other is hybrid technologies and classic race tracks. If we look beyond that, I think Formula 1 has no choice than to evaluate the idea of switch into fully electric. But given that Formula E is the only one to have a licence to run full electric championships, then Formula 1, has the only option to either buy Formula E or find an agreement. So it really depends on the timeframe.”

Noble adds, “Fans are attracted to access the best drivers in the best cars and the fastest cars. And at the moment, the technology isn't there from electric or from hydrogen to produce 200-miles-an-hour racing cars that can run flat out for two hours.”

A majority of fans, 56%, believe that the two series will eventually merge. And on the subject of consolidation, many leaders on this #ThinkingForward series have said that there are too many different race series and one consequence of the pandemic will be a consolidation. But our audience was very split on this with 36% agreeing that this would be a good thing for the sport and 38% disagreeing.

“Diversity of racing categories has always been one of the appeals of motorsport generally, and be that racing or rallying,” says Gallagher. “Those fans who want to see consolidation are probably thinking about it from the perspective that ultimately the world of motorsport is finite, you there is a certain amount of money available for a certain amount of categories to be strong.”

One of the most striking things to come from the survey is the demand from motorsport audiences for the sport to be a platform to promote sustainability, with 67% in favour and diversity, with 64% in favour. 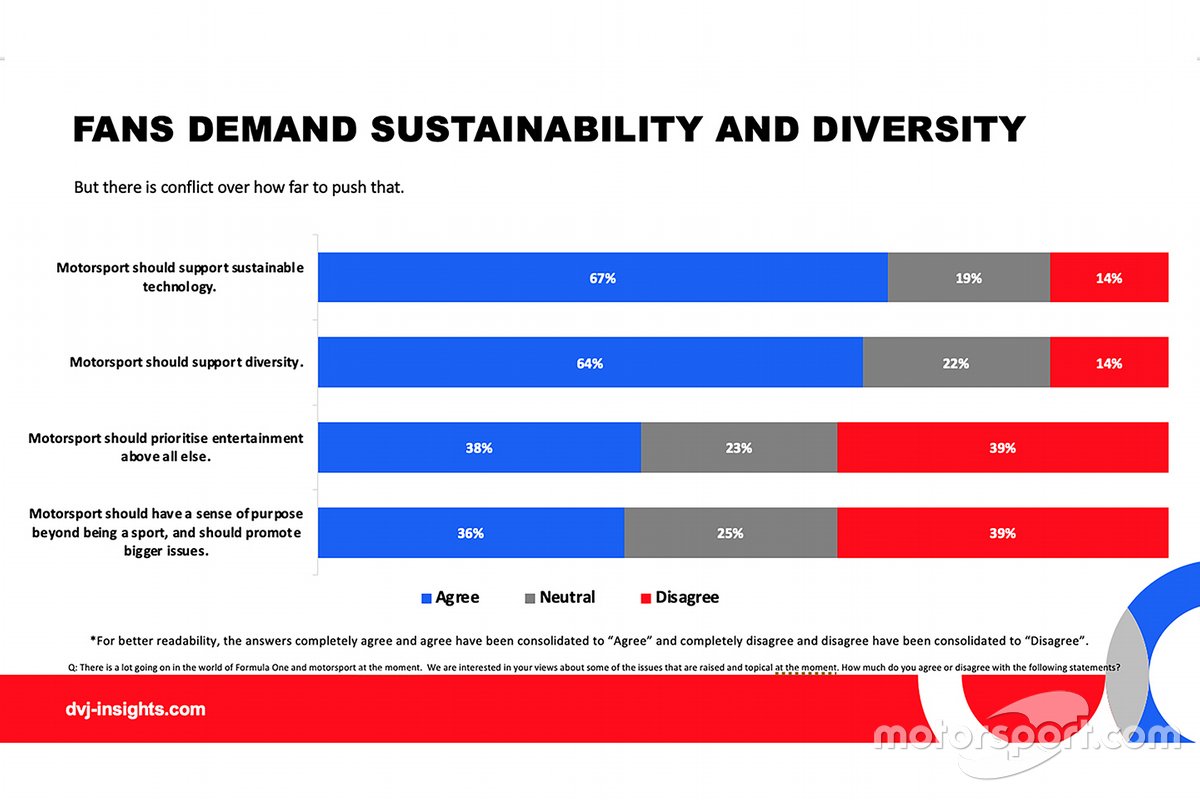 “If you had asked this question, even 12 months ago, I don't think you would have had 64% (on the diversity topic),” says Noble. “So I think it's been a very big push; Lewis Hamilton's efforts with the Black Lives Matter movement has generated headlines and been at the forefront of television coverage.”

Basso adds, “Something I have noticed also in the statistics; all across the generations, they're in favour of sustainability, but in particular, the younger generation are very keen on this point.”

This leads us on to the thony question that F1 and other series are wrestling with as they consider the future; the balance between being a pure entertainment and the need to demonstrate a sense of purpose. 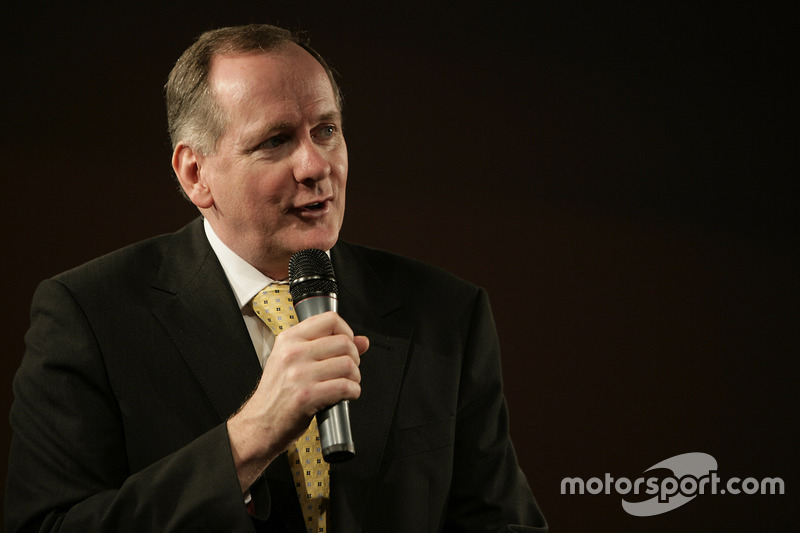 Gallagher does not mince his words here: “There are clearly a lot of people who are fans of motorsport who love seeing the technology. And yet they want to watch a great race on television. Formula 1 has done an appalling job of really promoting that (hybrid). I was in the meetings that determined those hybrid engine regulations. They were signed off by a bunch of technologists with absolutely no thought whatsoever for the commercial marketing, PR audience impact.

“That was purely a self-serving, technological quest that a bunch of engineers came up with and the implications of it weren't really weren't really thought through at all. I remember in the early days my colleagues at Cosworth saying, ‘Well, yes, these engines can be done, but it's going to be dreadful for anyone who actually enjoys watching the sport, it's going to sound awful, and it's probably not going to make for a great spectacle.’ And these were engineers saying that.”

Finally, we come to the recognition of our audience panel for the efforts of the FIA and F1 stage an almost full season – the first world championship sport to get back to competition after the initial lockdowns. 77% said that F1 had done a good job and 76% said the FIA had done a good job in creating a safe environment to return to racing. 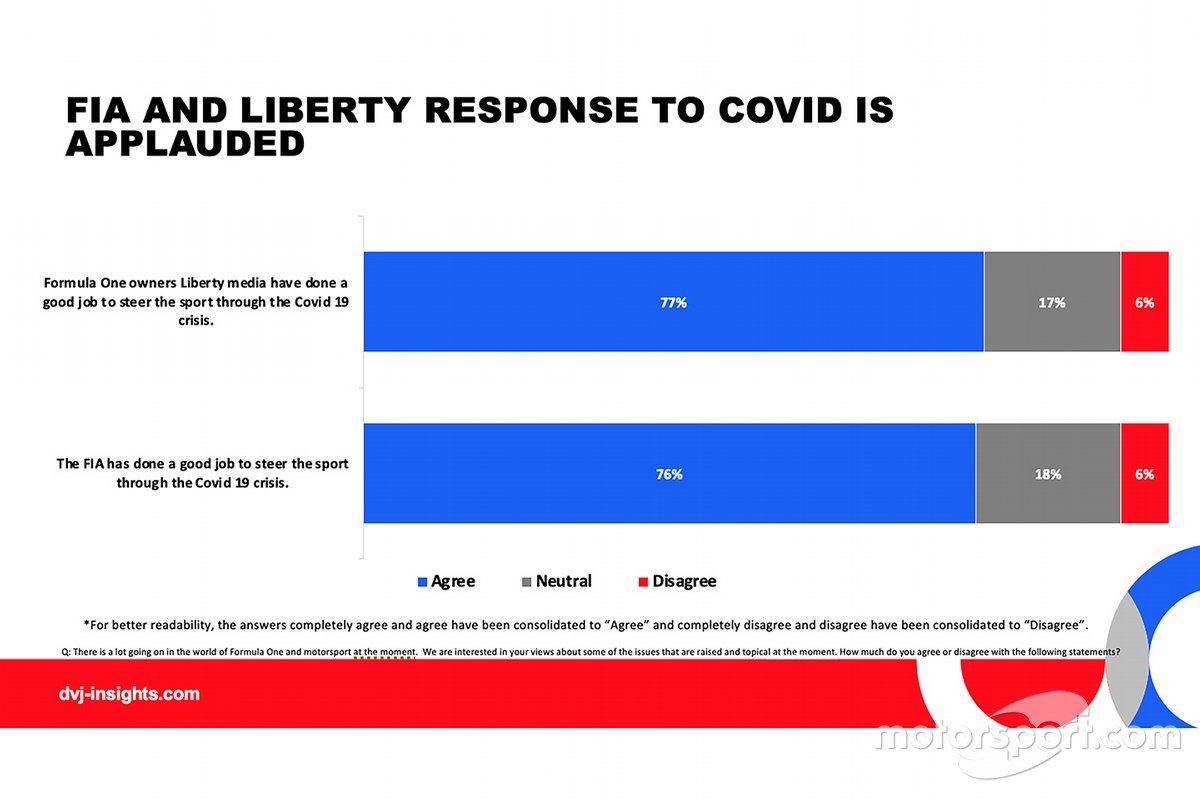 “It's incredible,” says Noble. “We sit here in late November time and we will have had a full season, almost 17 races, considering back in May, June time it was doubtful we'll get any races done. I think it's been a phenomenal effort from both F1 and from the FIA.

“But there are still other issues. Obviously the income has gone down drastically for Formula 1, there will still be huge losses. The team's finances have taken a hit – these are all things that will play out over the longer term, and will have an impact over the next two maybe four years.”

Toto Wolff says that FIA president Mohammed ben Sulayem should take a robust stance and show “integrity and leadership” if Formula 1 teams are proven to have busted the 2021 budget cap.

Mercedes boss Toto Wolff says it is now an "open secret" in the Formula 1 paddock that one team was "fundamentally massively" over the cost cap last year.

With many of the frontrunners enduring disjointed practice sessions ahead of the Singapore Grand Prix, it makes interpreting the lap times tricky. But, despite the difficulties for Formula 1 points leader Max Verstappen, there are reasons for him to not feel too disheartened after Friday

Red Bull insists that its Formula 1 cost cap submission last year was within the $145 million limit, despite mounting suggestions the FIA is poised to find it in breach.