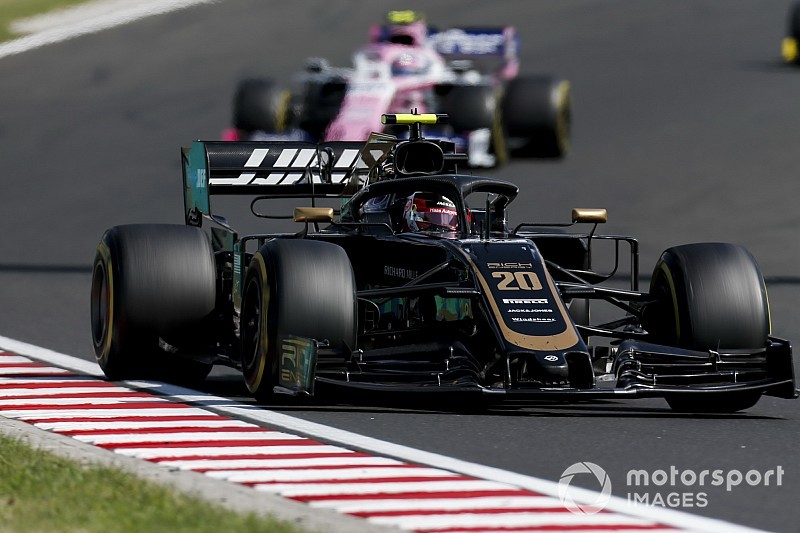 Haas boss Gunther Steiner says he does not understand the fuss made over Kevin Magnussen's defensive driving in the Hungarian Grand Prix after it earned the Dane a warning from race control.

Magnussen was robust in holding off Daniel Ricciardo as they battled it out for 13th, but the way he sometimes moved across the track in the braking zones led his Renault rival to complain over the radio.

With race control having been alerted about what was going on, it duly informed Haas to warn them that what its driver was doing could not continue – and a short message was passed on Magnussen.

While Ricciardo thinks Magnussen deserved more than just a warning for his behaviour, Steiner says he did not see that much wrong with what his driver did.

"Race control said he has to stop to move under braking, and that was it," said. Steiner. "And because there is another driver who does it all the time and gets away with it, that was our answer!

"I think we had a good battle going on for 13th and 14th, otherwise the TV was pretty boring."

While Haas notified Magnussen of the warning from race control, it did not issue any orders or advice itself on what to do – even though that opened the door to potential trouble if there were repeat incidents.

"We decided to risk even penalty or getting to the stewards, because I think in the end we are here to race, and I don't think it was dangerous or anything," added Steiner.

"The battle was about nothing anyway, so at least it was a good show. And I think they had a good fight.

"For sure, Ricciardo is not happy about it, but I don't think Kevin did anything, you know, exaggerated. It's like he was trying to keep his position, so I think everybody enjoyed it."

F1 race director Michael Masi said that the issue the FIA had with Magnussen's behaviour was there were a number of moves that were questionable.

"There was a warning for the team about the consistency of it," said Masi. "It was not that it was a one off, but it was the repeat part of it."

Masi said the FIA had acted as a response to a call from drivers to stamp out instances of moving under braking.

Asked about what was and was not allowed, Masi said: "There is a one movement allowed generally to protect your line, but the movement under braking is something that the drivers, from Bahrain, when we had our meeting with them all, it was something that they wanted – particularly if it was constant - us to crack down on."

Should Mercedes choose Ocon or Bottas?

Why so many F1 cars now have 'boomerangs'