Who will be the new prince of Monaco?

The field of aspiring Formula 1 hopefuls will battle in front of the sport’s powerbrokers.

Round three of the 2014 Formula Renault 3.5 Series will take place in the streets of Monaco on 22-25 May. The field of aspiring Formula 1 hopefuls will battle in front of the sport’s powerbrokers. The one race event on motorsport’s most famous circuit will be the curtain raiser for the Monaco Grand Prix.

Following the meetings at Monza and Motorland Aragón, the Formula Renault 3.5 Series comes to Monaco with Carlos Sainz (DAMS) atop the general classifications. Last year, the Spaniard made his debut. This time, the Red Bull Junior Team driver will not only have the chance to increase his championship lead, but also shine in front of the Formula 1 community.

Some 20 competitors hope to slow him down, including the first rookie to win this season, Oliver Rowland (Fortec Motorsports). The Englishman, like rival Pierre Gasly (Arden Motorsport), will have the delicate task of learning an urban circuit that forgives no error. The two can rely on their experience acquired in 2013 on the streets of Pau, during the running of the Formula Renault 2.0 Pau Trophy, which was won by Italy’s Luca Ghiotto (International Draco Racing), who hopes to bounce back after a scoreless weekend in Spain.

Other contenders are in the running. Second last year in the Principality, Marco Sørensen and his Tech 1 Racing team want to add another triumph to the three already obtained in Monaco. His Lotus F1 Junior Team team-mate, Marlon Stöckinger (Lotus) also hopes to stand out in front of the Formula 1 movers and shakers, as does the member of the Caterham Racing Academy, Will Stevens (Strakka Racing), who finished in the top ten in 2013. 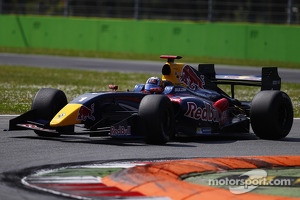 Top rookie and third overall in Monaco in 2013, Jazeman Jaafar (ISR) wishes to make a return visit to the podium. For Nikolay Martsenko (Comtec Racing), Monaco, a circuit that the Russian has yet to score a single point at, will be an opportunity to confirm his strong start to the year.

Several competitors come to Monaco with the goal of making an impression, such as Matias Laine (Strakka Racing), Norman Nato (DAMS), Oliver Webb (Pons Racing), Pietro Fantin (International Draco Racing), Zoël Amberg (AVF) and Sergey Sirotkin (Fortec Motorsports, who will also be watched closely by the Sauber F1 Team, where he is the reserve and test driver.

As for Matthieu Vaxiviere (Lotus), Meindert van Buuren (Pons Racing), Roberto Merhi (Zeta Corse), William Buller (Arden Motorsport) and Roman Mavlanov (Zeta Corse), all of whom have prior street racing experience, but this will be their first time on the legendary Monegasque circuit, as well as Beitske Visser (AVF).

An exceptional schedule for an exceptional event. The competitors in the Formula Renault 3.5 Series will have a 45-minute practice session Thursday morning before being divided into two groups for two 25-minute qualifying session on Saturday. Aired live on Eurosport Player, the race will be the curtain raiser for the Formula 1 Grand Prix of Monaco, at 11h10. The race will broadcast on a delayed basis on Eurosport International and Eurosport 2 France.

“To race as the curtain raiser for a Formula 1 Grand Prix is always a unique event”, says Renault Sport Technologies Communication Director, Régis Fricotté. “To see the Formula Renault 3.5s battle before the most prestigious motor racing category is an extraordinary show and a privilege of which our drivers are aware of, who always try to stand out even more than usual. Not surprisingly, those who succeed in Monaco are under the spotlight, as demonstrated by Daniel Ricciardo a two-time winner in the Principality, but also Charles Pic, Nico Müller, Pastor Maldonado and Sam Bird, to name just a few, have all become professional drivers.”

The Driver’s Eye Marlon Stöckinger (Lotus): “Monaco is really a different circuit. The margin for error is practically nonexistent and the slightest mistake can compromise the entire weekend. However, I like my chances. The team took a podium result last year and I won a race in 2012. I hope to do well in order to get back in the hunt!”

Oliver Rowland: “The plan is to continue to win”

Marko: "Changed" Gasly wouldn’t perform in F1 now how he did at Red Bull