Following the opening round held at Monza two weeks ago, the Formula Renault 3.5 Series is competing this weekend at the Motorland Aragón circuit.

Following the opening round held at Monza two weeks ago, the Formula Renault 3.5 Series is competing this weekend at the Motorland Aragón circuit. In sunny but gusty conditions, the drivers were fast to head on to the track with Carlos Sainz Jr going quickest early on. 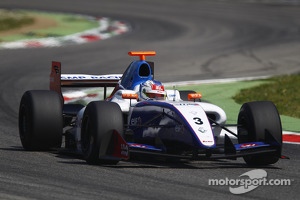 It was however, championship co-leader, Will Stevens clocking a best time of 1:41.970 to dominate Pierre Gasly, William Buller, Oliver Rowland and Carlos Sainz Jr when the chequered flag was waved.

The drivers considerably lowered the times in the opening minutes of the afternoon. The first leader, Meindert van Buuren (Pons Racing) was quickly bested by Jazeman Jaafar (ISR). The Malay led the way until Oliver Rowland went quicker at the half-way point in the session.

The Englishman’s team-mate, Sergey Sirotkin (Fortec Motorsports, then Nikolay Martsenko (Comtec Racing) set fastest lap ahead of the final sprint. With 10 minutes remaining, Roberto Merhi (Zeta Corse) moved to the top of the time sheet, but in the waning seconds, Carlos Sainz Jr then William Buller took over. With a lap of 1:41.222, the Englishman finished ahead of the Spaniard, Pierre Gasly, Roberto Merhi and Nikolay Martsenko at the conclusion of a session where one second covered the top 19 drivers.

William Buller: “It was a good day, without a single problem. The morning session went well despite the conditions. The car was excellent on the final run; but we could have improved even more. The team did a really good job. Tomorrow, we will need to obtain a good balance with the car and I have to concentrate on the start. It is something that I have worked a lot since Monza.”

Sergey Sirotkin: “We really didn’t show the speed we had during the winter tests. The wind unsettled me a little during the first session, but we double our effort for it to better in the afternoon. Unfortunately, we went for new tyres a little too early. I really feel we are a lot closer than the times show.”

Will Stevens: “It was good to first this morning. We have worked enormously hard since Monza to improve our pace on one lap. We managed to accomplish this in the opening session. Alas, the wind was really tricky today. In the afternoon, I wasn’t able to put in an ideal lap, but it was a positive day and I am sure that we will be competitive tomorrow.”

Strakka Racing aims to reign in Spain in next FR3.5 at Motorland Aragon