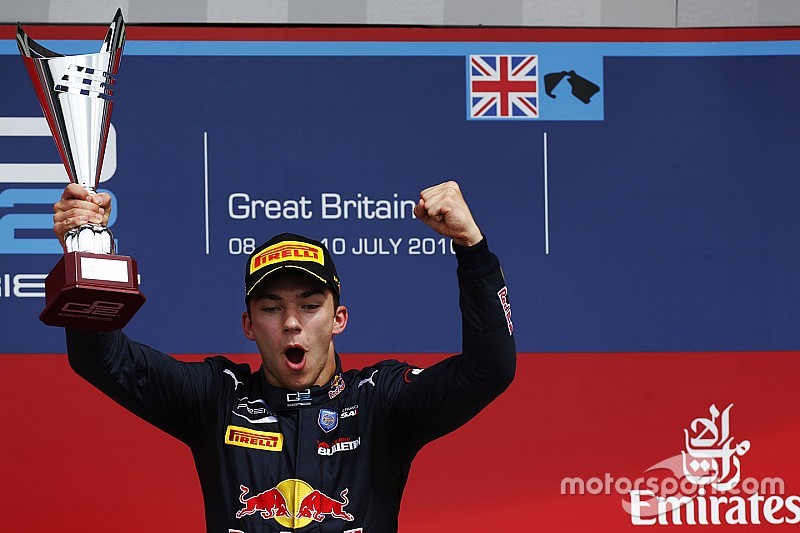 The Prema driver, who ended a winless streak of nearly three years at Silverstone, revealed that he, his mother and his coach had all been involved in a road car crash while getting to the track.

When asked by Motorsport.com in the post-race conference, Gasly said: “Unfortunately, I had a pretty bad road car accident on my way to the track.

“Actually, it feels pretty good to win today [Saturday] because my mother is stuck in the hospital until Tuesday with two broken vertebrae.

“So I think it’s really good, I would give her this victory. I wasn’t driving, we were with my coach, we had a pretty bad crash.

“[It] wasn’t the easiest weekend for me, it didn’t start well, I am really happy to be able to win this race.”

One win not enough for F1 seat

With 2016 a crucial year for Gasly, the French driver admits that one win will not be enough for a promotion to Toro Rosso, as Dr. Helmut Marko expects the 20-year-old to win the GP2 title.

“You can’t make any conclusion after only one race, I think of course, Helmut expects me to win all the races,” he said.

“I have to show them that I have the speed in me to get that seat [Toro Rosso].

“But at the moment it’s too early, for me what will be the key is to win the championship and that will have a bigger impact on where and what they are going to do with me for next year.

“For me, definitely, it’s clear that’s where I want to be next year but first I need to focus on my job because that’s what would make the difference to my future."

After prior runs with Toro Rosso, Gasly will be testing with Red Bull during the Silverstone test on both days.

The French driver ended a frustrating wait to claim his first-ever GP2 win, which came in his 37th race in the category.

“It feels fantastic, obviously, a lot of hard work, it’s been tough, last two years in GP2 I had a few opportunities,” Gasly said.

“I had the speed a few times to fight for the win but never able to make it happen, which was really frustrating.

“Also mentally, you know, you need to keep working and keep making a lot of efforts and try to make it happen.

“Since the beginning of the year, I felt that Prema had a really good package, we were fast in testing and we were fast also in the races.

“Last weekend I miss my chance after a mistake in Race 1 and I really wanted to do well this weekend and we made it until the end this time. Yeah, it does feel really good."