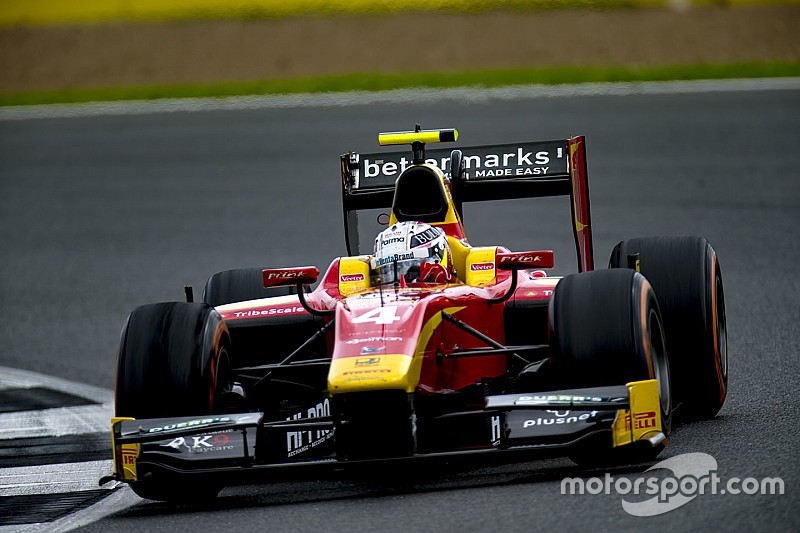 Jordan King took a second GP2 sprint race victory in as many weekends at Silverstone, the Brit holding off a charge from Luca Ghiotto in tricky conditions.

Starting from reverse grid pole, King made a good getaway at the start to move into an immediate lead ahead of Nobuharu Matsushita, Norman Nato, Oliver Rowland and Ghiotto.

That was how the order remained at the front for the first part of the race, with King holding the gap to Matsushita at a steady one second, but the second Racing Engineering car of Nato was unable to keep the pace with the top two.

The Frenchman soon fell victim to both Rowland and Ghiotto, the latter clearing the former for second on the ninth lap of 21 with a superbly executed outside pass at Stowe.

Two laps later, and at the same corner, Ghiotto picked off Matsushita for second and began to close in on leader King at a veritable rate of knots.

At the two-thirds distance mark, a maiden GP2 win for Ghiotto seemed inevitable, but King didn't put a wheel wrong and never allowed the Italian a clear shot at passing for the lead.

Ghiotto's pace than began to wane, with King building his advantage in the closing laps, only for a late rain shower to bring Ghiotto back into contention.

But King held his nerve, crossing the finish line with half a second in hand over Ghiotto to secure his second GP2 win of the season following his sprint race victory at the Red Bull Ring last weekend.

Matsushita had been set to complete the podium until the Japanese driver locked up at Brooklands under pressure from Rowland, costing him two places as the British driver made it two podiums in two races with third place ahead of Giovinazzi.

Behind Matushita, Nato spun off out of sixth place in the late rain shower, handing the spot to Raffaele Marciello, who found his way past a struggling Mitch Evans with two laps to go.

Evans then fell pray to Pierre Gasly - the Red Bull protege recovering from 12th after a poor start - and Marvin Kirchhofer, who claimed the final two points-paying positions.

The New Zealander ultimately finished 13th after a final lap off at Stowe, one place ahead of Williams development driver Alex Lynn, who suffered another frustrating outing.

Sergey Sirotkin's luck failed to improve either, as the Russian sustained a puncture in an early tangle with Artem Markelov, removing him from point-scoring contention.