The final pre-season test concluded in Silverstone today before the GP3 Series heads to Barcelona next month to kick start the 2012 season. The session got underway under dark clouds on a chilly morning at a slippery circuit which was declared wet at the start of the test. Maxim Zimin stepped into the Jenzer Motorsport and was fastest for the first hour until Tio Ellinas in his Marussia Manor Racing car took control of the timesheets. The morning test was eventful: five red flags occurred with several drivers getting caught out in the tricky conditions. 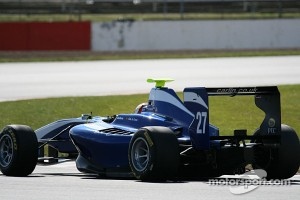 Antonio Felix Da Costa went top as the times continued to improve on a drying track as the drivers switched from wet tyres to slicks. Aaro Vainio then shot to P1 as the session was red flagged when Kotaro Sakurai spun off into the gravel. Ocean Racing Technology’s Robert Cregan suffered a technical issue when he was forced to stop on the circuit, giving a premature end to his morning test.

The position at the top of the timings then changed numerous times before Felix Da Costa regained his place back at the head of the standings. Conor Daly and Ellinas jumped up to P2 and P3 ahead of William Buller who was confirmed as driving for Carlin for 2012 this morning. David Fumanelli, Marlon Stockinger, Vainio, Daniel Abt, Matias Laine and Kevin Ceccon completed the top ten. 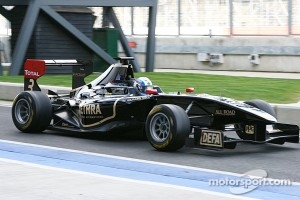 Following the one hour lunch break, it was the fastest man from day one, Mitch Evans who set the early pace in the afternoon. The New Zealander quickly improved on his best time from yesterday by a tenth of a second setting a lap of 1’50.150. Buller then made a trip into the gravel, thus causing a halt to proceedings. As the rest of the drivers concentrated on long runs and some pitstop practice, Laine had a quick, therefore a red flag arose. Within the final forty-five minutes, the rain began to lightly fall, as the session came to a close with Evans heading the pack again. Robert Visiou was a late addition to the top ten and went P2 in the dying stages ahead of Vainio, Fumanelli, Abt, Ellinas, Stockinger, Daly, Laine and Alex Brundle.

GP3 Series is next on track when the 2012 campaign begins at the Circuit de Catalunya in Barcelona on 11-13 May.

More from
Daniel Abt
Formula E