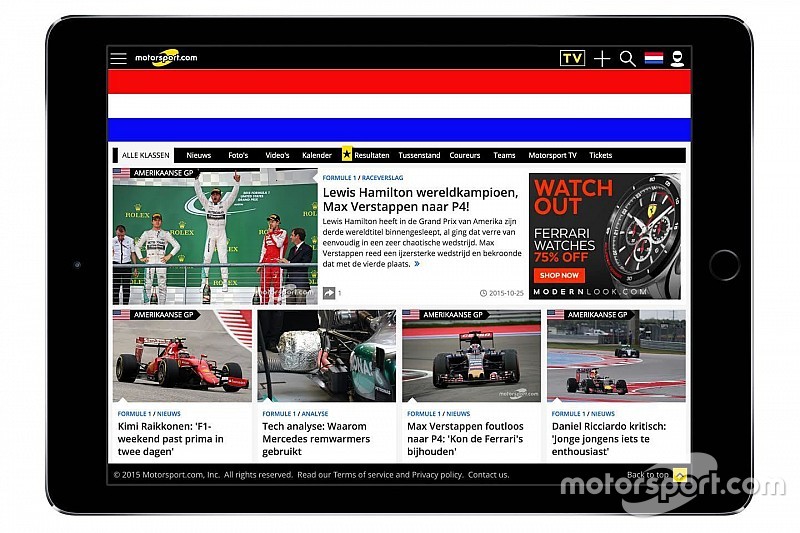 "The Dutch response to the Global Fan Survey organized earlier this year by Motorsport.com with the GPDA led to an overwhelming call for more qualitative multimedia digital content in Dutch,” said Guillaume Navarro, president, Motorsport.com – NETHERLANDS. “The Netherlands is a target rich motorsports environment and we felt we had a duty to provide a local platform to complete our international motorsports footprint.

“2015 is a reminder of how passionate and knowledgeable racing fans are in the Netherlands with the Max Verstappen mania; a fact that didn’t change since his popular father Jos raced at the top level,” Navarro added. “I am extremely pleased to work with Tim Biesbrouck and his team; racing enthusiasts will be spoilt with a new all in one source of content, 24 hours a day, seven days a week.”

Today’s announcement follows the recent addition of significant global additions in the region, including Germany, Italy, France and the United Kingdom.

"I am very honored to be part of Motorsport.com’s professional team, that has built an impressive global network and online platform,” said Tim Biesbrouck, content manager, Motorsport.com – NETHERLANDS.

The Dutch edition creates a unique opportunity for fans to consume motorsports content from all around the world.

“Together with a dedicated local team we will be paying detailed attention to our rising star Max Verstappen from inside the Formula 1 paddock, to other major racing series and developments from the Benelux area. In fact, we will be following our professional and talented local drivers around the globe.”

One of the fastest growing motorsports websites in the world, Motorsport.com is a technically advanced digital distribution platform, which provides worldwide, multimedia motor sports coverage resulting in over 180 countries this year and includes sister companies Motor1.com and Motorsport.tv.