Team owner and lead driver Claudio Burtin will be joined in by Jack Baldwin and Martin Ragginger and first-time teammates Mario Farnbacher and Robert Renauer.

DAYTONA BEACH - FOAMETIX/Burtin Racing with Goldcrest Motorsports returns to the Rolex 24 At Daytona for the sixth-consecutive year this weekend with team owner and lead driver Claudio Burtin co-driving the No. 17 FOAMETIX/Z-Value Porsche GT3 with Martin Ragginger and Jack Baldwin and first-time teammates Mario Farnbacher and Robert Renauer. 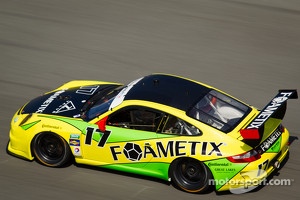 FOAMETIX/Z-Value is ready for the Rolex 24 after successfully competing in 2012’s GRAND-AM Road Racing North American Endurance Championship (NAEC). Burtin and Ragginger finished out the three-race series with a team career-best showing of sixth in the GT Class at the inaugural Brickyard Grand Prix at Indianapolis Motor Speedway in July.

“I am really looking forward to running a clean race and having no issues,” Burtin said. “The five prior races we’ve led and been very competitive and something or other has just caught us out. We’ve never been able to run a clean race to the end. So that is really what I am looking forward to the most this year. We want no incidents, good pit stops and just being there for the whole 24 hours.”

Ragginger is an experienced Porsche driver from Austria who has served as the lead driver for FOAMETIX for the past five years. Team rookies Farnbacher and Renauer are from Germany.

“This will be the sixth time at the Rolex with Claudio” Ragginger said. “So far our best finish was 12th, so we will try to do better this year. Each time we had issues and didn’t finish the race. This time we will try to keep away from all the problems out there. Daytona is a tough race and we just need everybody to do his job and keep the car alive. It would be nice to finish the race with no issues.”

Baldwin is a former Trans-Am and IMSA Camel GTU Champion and Rolex 24 class winner. He was also a top contender in the 2012 Pirelli World Challenge, taking the GTS class victory last April at the Grand Prix of Long Beach.

“I'm proud to say this will be my 25th Rolex and my sixth year in a row with Claudio and Martin,” Baldwin said. “Our FOAMETIX Porsche has always been fast but completing the distance has, like so many others, been our challenge. This year with the addition of Mario and Robert along with Goldcrest Motorsports handling the preparation and race execution, I feel our chances are very good as long as lady luck looks kindly on Frankensteina.”

“Frankensteina” is the affectionate nickname the FOAMETIX team has for the No. 17 because the car is made up various chassis, tub and body and suspension components from several different years and models of Porsche GT3s. The Porsche even carries a logo and the insignia of its namesake on the right rear quarter panel by the wing mount.

Farnbacher and Renauer both joined the No. 17 team for the recent Roar Before the Rolex 24 test and quickly confirmed they each have the skills and experience to bring a top result. Farnbacher comes from a family of racers. He is the son of team owner Horst Farnbacher, whose team can count the GT class victory at the Rolex 24 in 2005 among its many successes. His older brother is current SRT Viper factory driver Dominik Farnbacher.

Renauer is no stranger to endurance racing or Porsches. He drove a Porsche GT3R in the German ADAC GT Masters series in 2012 and finished sixth in driver standings while also placing fourth in that year’s German Porsche Carrera Cup series. Renauer is making his second appearance in the Rolex 24 after competing in 2007 race in a Porsche Fabcar Daytona Prototype.

FOAMETIX/Burtin Racing is competing in this year’s Rolex 24 to raise awareness for Z-Value, the latest standard in efficiency ratings in the insulation industry.