AIM Autosport and R.Ferri Motorsport join forces for "Racing with Ferrari" in 2013. Driver lineup is now official for the AIM FXDD #61 and #69 Ferrari 458 Italia GT cars.

AIM Autosport with Ferrari have expanded its car and driver lineup for the 2013 Grand-Am Sports Car Series, beginning with the 51st edition of the Rolex24 at Daytona. The high-profile team is going from a one-car to a two-car team and star drivers Max Papis and Anthony Lazzaro have signed-on for the season ahead.

Papis and championship driver Jeff Segal will drive the team’s new No. 61 Ferrari 458 GT Grand-Am car and Lazzaro will co-drive with Emil Assentato in the No. 69 FXDD entry.

I’m really excited because I feel that I’m reunited with Ferrari.

Said Papis about his re-entry into sports car racing, “It’s a great opportunity to be back in the Grand-Am Series. Obviously, I always love what Grand-Am has done in the last 10 years. I was actually present at one of the first DP races, so my relationship with sports car racing goes way, way beyond this announcement.

“I’m really excited because I feel that I’m reunited with Ferrari. Ferrari is the mark that gave me the chance to come to American in 1996. I had tremendous success with them, and as soon as I got the opportunity to rejoin them, I got a phone call from Mr. Marco Mattiacci, the president of Ferrari USA, and he told me about the plan that he had in mind. And when he explained to me that Remo Ferri was involved and was the owner of the team, it brought a lot of great memories back."

Papis made his American fame while driving the MOMO Ferrari with Gianpiero Moretti as team owner but unknown to many was that Ferri actually owned the car. Added Papis, “I think it is a great opportunity and the excitement is just amazing because we are building toward what the 2014 racing season will be. We’re going to get ready (during) the 2013 season and preparing our tools for the 2014 one.” 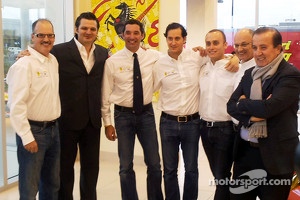 While Lazzaro may not command the headlines that Papis does, he is just as thrilled about racing a highly competitive Ferrari, teaming with Assentato. “For me personally, it’s a wonderful opportunity. I’m stepping into the car and the team with the co-driver who won the championship in 2010 and 2012. My history with AIM is I’ve done a couple of races with them, and I’ve also done some testing with them in Daytona Prototypes.”

Papis has not driven the car but he has fired up the engine and was impressed with its sound. “It actually sounds like a Ferrari, and it’s pretty awesome,” he said. He also lauded Grand-Am for building a strong field in the GT class. “I believe the GT series is going to be the future of sports car racing,” he noted. “I love the fact that the cars all look different and there is a lot of personality between cars. When you are on the grid, you can definitely see the extravagance of the design of the cars and me as a car guy, I love that.”

Lazzaro believes having two cars will give AIM an advantage. “We have two cars to develop now, so I think the development phase of it is going to be much better in that we have two cars and a lot of good drivers in which to work with to develop.”

Each driver commented that they will be under severe pressure to succeed, but they were looking forward to the challenge. “I am expecting something spectacular out of the year and out of myself,” Papis said. “When I told my kids that daddy was going to be driving a Ferrari, they were so excited about it.” 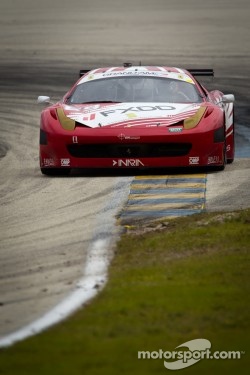 He also believes his recent experience with NASCAR racing might give him an advantage. “I know that the car is beautiful and shiny, but if it would have to be used up a little bit, I’m planning to use the things I’ve learned in NASCAR to rub people up if that’s what’s going to be the case. I’m definitely coming in with a lot of will to succeed, and just going to tell myself to got out there and make it happen.”

While some drivers view racing as a job, Papis doesn’t. “Racing is a passion, and racing is a lifestyle. It’s a performance business,” he said enthusiastically.

Porsche and Ferrari have been rivals for years and Papis believes his team can take it to a new level. Looking ahead to the 2014 season when the two sports car bodies merge, Papis forecasts that the rivalries among the manufacturers will become even more intense.

Looking at the Grand-Am schedule for 2012, Papis and Lazzaro realize they will be seeing some tracks for the first time and for others, it will be a renewal. Among the stops discussed were those at Road America, Kansas, Road Atlanta and Austin. Papis won his first race at Road Atlanta and Lazzaro made his debut with Ferrari there in 1988.

Other drivers will be added to the AIM lineup for the Rolex24 at Daytona but for now, Papis, Lazzaro, Segal and Assentato along with the Ferrari brand will make the headlines.