SpeedSource places fifth at the Circuit Gilles Villeneuve in Montreal

This weekend saw GRAND-AM teams make their only international stop on the 2012 calendar in Montreal, Quebec. This event marked the series’ sixth visit to the Circuit Gilles Villeneuve. The #70 Castrol ModSpace Mazdaspeed Mazda RX-8 would finish in fifth place. 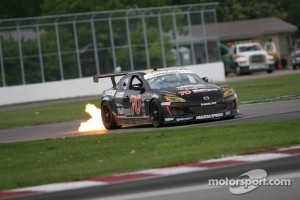 The Circuit Gilles Villeneuve is located in the Parc Jean-Drapeau on the man-made Île Notre-Dame island. The 2.7 mile, 15 turn road course again hosted a two hour sprint race. Fans were out in force to support the many Canadian drivers.

With just one week between the Continental Tire 200 at Watkin’s Glen and the Montreal 200, the SpeedSource crew headed straight from New York to Quebec. Before the event started, the SpeedSource crew worked tirelessly to repair suspension damage suffered in last weekend’s event. Albi Mazda, the world’s largest Mazda dealer, offered the use of their facility to prepare the RX-8 for the Canadian event. The car was restored to top condition for the start of the first practice. Sylvain Tremblay qualified the #70 Mazda sixth.

The short race format promised constant action as driver’s pushed their cars to the limit from the green flag. A hectic race start forced the GT field to avoid a spun DP car in turn 1 on the opening lap. Montreal native Tremblay seized the opportunity, moving up to fourth place by exit of turn 2.

The first caution came just thirteen minutes into the race, after an incident involving two DP cars. While most GT cars elected not to pit, the SpeedSource team used the opportunity to re-fuel their Mazda RX-8. This dropped the #70 back to tenth place when the race returned to green flag running.

Sylvain fought his way back to seventh before the second full course caution. With one hour and fifteen minutes remaining, every GT car entered pit lane for service. SpeedSource made use of their league leading pit stop performance to move the #70 up the order. Despite performing a full service stop, the SpeedSource Mazda, now driven by Jonathan Bomarito, moved from seventh to second position in pit lane!

The progress was not to be, however, as Bomarito was tagged from behind by the #59 GT car on the restart. The contact spun the Castrol ModSpace Mazdaspeed Mazda RX-8, dropping the team back to last place. This was the same car and driver that took the #70 out of contention at last week’s event.

The #70 showed great pace in the second half of the race. The SpeedSource prepared car was able to turn laps in the low 1:40s, on par with the GT leaders. This speed allowed Bomarito to march back through the pack. The slippery, narrow circuit did not make passing easy, but the SpeedSource driver clawed all the way back to fifth place before the checkered flag fell.

The SpeedSource crew proved once again that they are the class of the field. Unparalleled car preparation ensured that the #70 was race ready after last week’s incident. The lightning fast pit stop that elevated the car five positions on pit lane is proof that the team’s practice and dedication to their craft is paying off.

SpeedSource would like to thank Albi Mazda for their generous hospitality.

The penultimate round of the 2012 GRAND-AM Rolex Sports Car Series takes teams across the country to Mazda Raceway Laguna Seca. SpeedSource looks to return to the top step of the podium at Mazda’s home track.