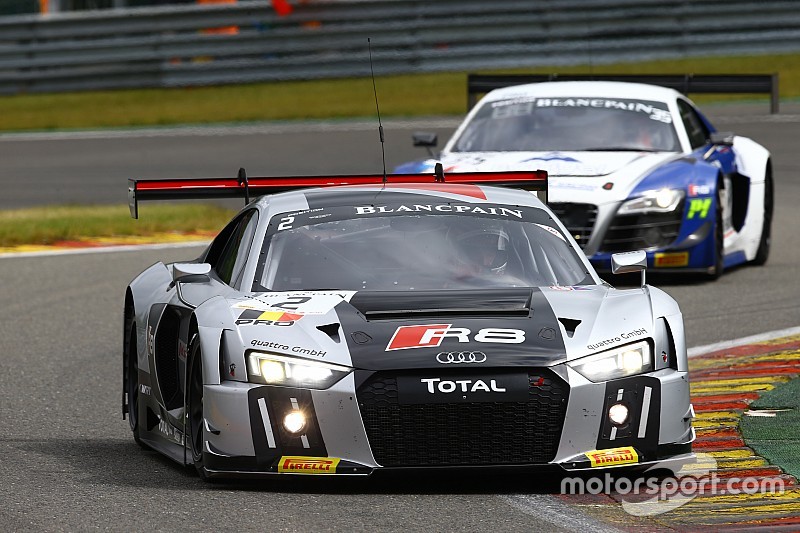 Frank Stippler (#2 Audi Sport Team WRT) proved to be the fastest qualifier during the Superpole Session for the 2015 Total 24 Hours of Spa. The German driver – the winner in 2012 - barely pipped the #58 Von Ryan Racing McLaren of Kevin Estre by 0.017 of a second, with Andrea Piccini in the #11 Kessel Racing Ferrari - fastest in the Pro-Am Cup - only 0.046 behind.

Alvaro Parente in the second of the Von Ryan Racing McLarens completed the second row of the grid. With cars from Bentley and BMW in the top 10 as well, this meant five different brands on the first five rows of the starting grid for the 2015 Total 24 Hours of Spa.

Superpole is all about having a faultless lap, something which is hard to accomplish under normal conditions, and the added pressure did not make the challenge any easier. Laurens Vanthoor (#1 Audi Sport Team WRT) and Maxime Martin (#45 BMW Sports Trophy Team Marc VDS), the two Belgian favourites to take the pole, were not able to set a perfect lap and had to settle for sixth and tenth positions respectively.

Vanthoor's team-mate Frank Stippler had a near perfect run in the #2 Audi Sport Team WRT and managed to set a 2'18.130, the fastest lap in the GT3 era of the Total 24 Hours of Spa. The top three cars were separated by less than five hundredths of a second (and the fastest ten cars - representing five different manufacturers - by less than six tenths), another proof of the competitiveness of the Blancpain Endurance Series and the Total 24 Hours of Spa in particular.

Of course I am proud of this achievement, but it is only a small step.

So Frank Stippler and Andrea Piccini took pole in Pro Cup and Pro-Am Cup respectively, while the #24 Team Parker Racing Audi will be on pole for the Am Cup, after the #10 Akka ASP Ferrari lost its fastest lap and incurred a ten-place grid penalty after a yellow flag infringement during the night qualifying session on Thursday evening.

Tomorrow promises plenty of activities. When the cars of the Total 24 Hours of Spa are competing on track, the Lotto Village will be the epicentre of the off-track entertainment. The highlight is without a doubt Martin Solveig’s DJ Set, but before the Frenchman takes to the stage, other DJs will give their all as well, starting at 9pm. But the Lotto Village is worth visiting long before the concert starts. Fans of the Total 24 Hours of Spa can also admire the amazing riders from the Circus Trial Tour or the finalists of the Nismo GT Academy. There is plenty of activities for the whole family as well. Bumper cars, fairground rides, drink and food stands, merchandising shops: you can find everything in the Lotto Village. And do not forget the impressive fireworks on Saturday evening!

Tomorrow's action starts at 9am, with a twenty-minute Warm Up, followed by four support races: the Formula Renault 2.0 NEC, Trofeo Abarth Europe, Lamborghini Blancpain Super Trofeo and Porsche Carrera Cup. The start of the 67th running of the Total 24 Hours of Spa will be given at 4.30pm.

Frank Stippler (#2 Audi Sport Team WRT): "The guys have done a great job in preparing the car for the Superpole. This was about the best lap I could do, I think. Of course I am proud of this achievement, but it is only a small step. Tomorrow we will see how competitive the car is over a long run."

Kevin Estre (#58 Von Ryan McLaren): "Yesterday I found it very difficult to drive the car, but during the night session we slowly managed to improve the car. For this Superpole the engineers decided to try something new and it worked out very well. Of course it is a bit disappointing to miss the pole position by just 17 thousandths of a second, but it still is a good starting position for the race."

Andrea Piccini (#11 Kessel Racing Ferrari): "After the qualifying session I promised I would try to beat Laurens Vanthoor and Maxime Martin - and I did - but these two guys proved to be even quicker. Our aim is to go for the Pro-Am Cup honours, my team-mates are in a good position for the championship, but if we can go for a good result overall, we will take that opportunity as well."

Morgan-McClure will not renew Lepage for 2002