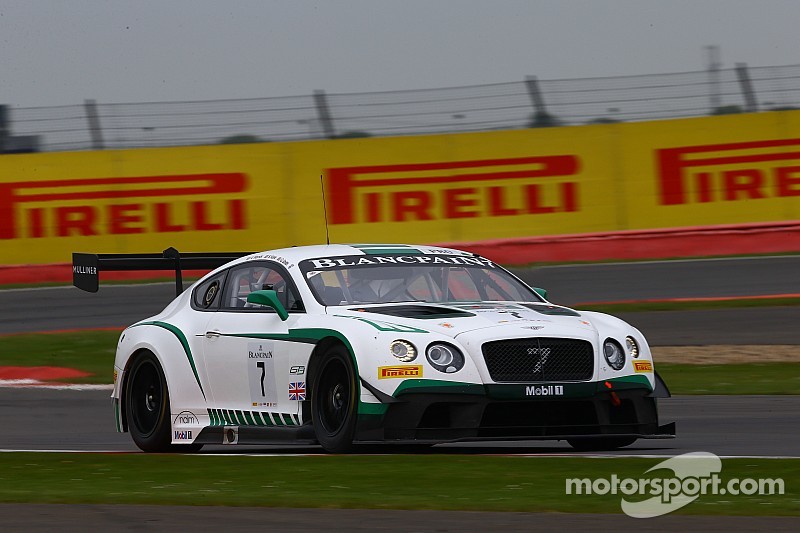 Silverstone - Bentley’s return to the home of British motorsport at Silverstone brought a double-top-ten finish despite a challenging race for both cars. While the pace of the Continental GT3 was good enough to try and emulate last year’s victory at the track, circumstances meant that the Bentley Boys had to settle for the satisfactory results of P6 for car #8 and P9 for car #7.

After a rain-disrupted qualifying earlier in the day, Car #8 started from P17 on the grid, and Maxime Soulet drove an outstanding opening stint to move up through the field to sit P8 by lap 17. As those around him pitted under a full course yellow, Maxime stayed out to move up to P6 before pitting and handing the car to Maxi Buhk. Maxi drove a solid stint to maintain P6 overall, before being relieved of duty on lap 53 by Andy Soucek, who rejoined the race in P12 with those ahead due to stop. A restart after a full course yellow saw Andy climb to P7, before being reprimanded for a collision with a competitor with a drive-through penalty, dropping him to P8. Fortunately, Andy was able to recover strongly in the remaining 20 laps, gaining two more places to finish P6.

We definitely had the pace to get a better result today, but sometimes it just doesn’t go your way.

Car #7’s race began from P9 on the grid with Guy Smith at the wheel. As is becoming typical, Guy gained three places at the start to move up to P6, and as he came in to the pits on lap 31, he was in P4. Unfortunately, a failed wheel nut cost the team 30 seconds, and when Andy Meyrick left the pits, he rejoined the track in P24. However, Andy was able to recover quickly, rapidly moving through the order to move the car up to P16. After a driver change on lap 52 for Steven Kane, the recovery continued, with Steven progressively taking places before ultimately settling for P9 as the chequered flag fell.

“Like the Nürburgring 24 Hours last weekend, this was a race where the pace of our cars was not equalled by our luck. Car #7 was very unfortunate in the first pit stop – the right-rear wheel nut failed to engage and had to be replaced – but as always Andy, Steven and Guy were insatiable in their appetite for a top ten result. Car #8 had a better race, and while Maxime drove an amazing stint I was disappointed in Andy’s penalty. Still, we’ll take two top-ten finishes, and look to build on this in a few weeks in the third round at Paul Ricard.”

Bentley Team M-Sport returns to the track on 19th June, for the third round of the Blancpain Endurance Series at Paul Ricard. Before then, Bentley Team HTP will race at Zolder in the Blancpain Sprint Series and the Red Bull Ring in ADAC GT Masters.

Guy Smith, car #7: “The car was great today, and in my stint I made good progress. That set us up for the rest of the race, but the problem in our first pit stop meant that we were fighting for a top ten finished rather than a podium. It was massively unlucky, but I’m happy that we were on the pace and we can definitely look forward to the next race.”

Andy Meyrick, car #7: “My stint was about making as much progress through the Pro-Am cars as possible. The balance of the car was good, and I had plenty of overtaking to do which meant an exciting stint. In clear air the car was really strong and I was really happy to gain eight places, which meant Steven could push for the top ten. We pulled together as a team despite the circumstances, and that’s a real positive.”

Steven Kane, car #7: “We definitely had the pace to get a better result today, but sometimes it just doesn’t go your way. Towards the end of the race, we were the fastest car on track, and I had the confidence to close on those ahead of me and make clean passes. I think all three of us drove really well today, and we’ll definitely attack the race at Paul Ricard and push for a podium.”

Maxime Soulet, car #8: “My car was really good through the whole stint, and I could push all the way from the green flag to the end of my stint. The race pace was much better than our qualifying pace yesterday, and I kept out of trouble and steadily took places. There’s more to come, but I’m pleased that we’ve had our best result as a driver team so far.”

Maxi Buhk, car #8: “After Maxime’s brilliant stint I was set up for a great drive. I was able to follow the cars ahead very closely, which was a positive sign of our pace. I lost some time battling past an Audi, but once as I was ahead and in clean air the car handled really well.”

Andy Soucek, car #8: “That was a frustrating stint for me, but we worked through the drive-through penalty and scored a good result. The penalty was a shame and without it we could’ve been challenging for P4, but this is only our second race together and we get stronger with every round.