SEBRING, Fla. (Feb. 21, 2014) – The Continental Tire SportsCar Challenge concluded a successful two-day test Friday in preparation for its first race at Sebring International Raceway,, with the Ford of Phoenix American Motorsports and the BMW of Murillo Racing/Mosing Motorcars recording the fastest speeds in their respective classes. 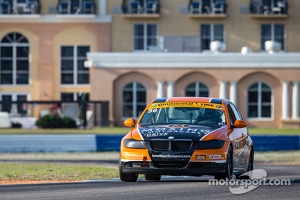 The Continental Tire Challenge will return to the historic 17-turn, 3.74-mile circuit for the second round of the 2014 season on Friday, March 14.

“After yesterday’s practice we made a couple of setup changes to make our car handle the bumps a little better,” said Aquilante, who co-drives with Kurt Rezzetano for the Pennsylvania-based team. “So far, it looks like it’s working. The car was a lot more consistent today than in Thursday’s testing.”

After running second in both of Thursday’s sessions, Foss stepped up Friday. A driving instructor for the Panoz School at Sebring from 1999-2007, Foss and co-driver Jeff Mosing were ST winners in the 2014 season-opening BMW Performance 200 at Daytona International Speedway.

“I was shaking off the cobwebs on Thursday – it was my first time here since 2009,” Foss said. “It probably will be a pretty crazy race when we come back here next month. It seems every time we race at Sebring, if you’re in the top five on the last lap you have a chance of winning. We’re working on getting our car to put us in that position.”

Rum Bum Racing up to speed in Sebring testing