PC victory comes down to shoot out in final laps

CORE autosport has kicked off its 2014 TUDOR United SportsCar Championship season by winning the two most prominent endurance races in North America: first the Rolex 24 at Daytona and now the Mobil 1 Twelve Hours of Sebring.

James Gue took on opening stint responsibilities, starting the No. 54 ORECA FLM09 from fourth, where Colin Braun qualified the car on Friday. Gue’s first stint was plagued with yellow flags, many of them for incidents involving other PC cars. Gue kept the No. 54 out of trouble, handing it over to Jon Bennett without issue, who held the car in fourth-place before trading places with Braun.

It was in Braun’s hands that the car found the PC lead for the first time. He held onto the lead until just past the halfway mark, when he passed the controls back to Gue. By this point in the 12-hour race, it was clear the PC class had boiled down to a battle between CORE autosport and the No. 09 RSR Racing entry. 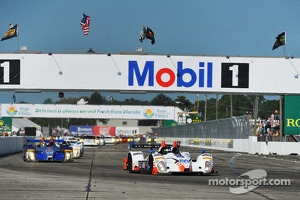 Gue held his own in a duel with RSR’s David Heinemeier Hansson with three hours to go, leaving Braun in a position to fight for the win in his final stint. The final full-course caution was issued with less than an hour remaining in the race while Braun was running second to RSR’s Bruno Junqueira. Both cars needed to make pit stops during the yellow flag to make it to the finish, so CORE opted to use the strength of its pit work to leapfrog the No. 09 in the pits.

The green flag flew with 20 minutes remaining in the race and Braun in the PC lead. Junqueira cranked up the pressure with each lap and was within striking distance numerous times, but Braun kept his cool. At the finish line it was Braun by 2.428 seconds over Junqueira.

It is the second win at Sebring for CORE autosport, but the first for Bennett, Braun and Gue who are fresh off their Rolex 24 at Daytona win. The team has now won the first two rounds of the Tudor United SportsCar Championship and the Patrón North American Endurance Cup, not to mention the two most legendary sports car races in North America.

CORE autosport will have a bit of a break before its next event, the Continental Tire Monterey Grand Prix Powered By Mazda at Mazda Raceway Laguna Seca, May 3 – 4.

Jon Bennett
Driver: No. 54 ORECA FLM09
“I went out after James who did a great starting stint for our team. There was a lot of traffic. There’s a lot of new drivers and there’s a lot of new teams—obviously as you add two racing series together. As a race driver, you begin to learn other drivers’ personalities, and you begin to learn what they like and don’t like. In this case there’s a lot of unknowns, and you have to be very, very careful and pick your battles appropriately. Even though it’s our instinct to go hard and take a lot of chances, ultimately here it’s about making smart choices, and I think all three of us did, and of course James and Colin are wizards in the car.

“We all work hard. We know that we’re a team. We’re all focused on our individual jobs and specialties, and we take it quite seriously. We’ve proven that if each of us does our individual part to the best of our ability and we have a little bit of good luck, which is sometimes related to all of us doing the best we can, then the results will fall where they fall. I think sometimes it’s easy to get focused on the results and forget the process. For us it’s the other way around.

“I knew coming here there would be a lot of questions about our fantastic weekend at Daytona, and I told myself that certainly that couldn’t repeat itself. But we came here like we do at every event and we have a process, and we start at the beginning and let the results be what they’re going to be. As the 11th hour clicked down, I was just in awe of the progress we had made and each of our individual successes adding up to another great event for us. There are really no words, and I’m very, very thankful for all the hard work that went into both wins. To accomplish the win here this year in the shadow of winning Daytona just a few weeks ago, it’s a fantastic accomplishment.

Colin Braun
Driver: No. 54 ORECA FLM09
“It was stressful there at the end. We had a lot of pressure from Bruno. He was definitely quick. You never know how it is when you get through traffic – it sometimes goes your way and sometimes doesn’t. It was really nice that it went our way. We had to push pretty hard. I was dropping wheels and making some moves in traffic that were pretty aggressive. But that’s what you’ve got to do to win these races.

“I feel like we accomplished what we set out to do. That’s what these guys are all about: we come to the race track with a really good plan and we run through that plan. That’s something that Jon Bennett and Morgan Brady have kind of beat into everyone’s head that work there. We don’t show up without having a plan to execute. We just come to these races and run through our plan. And we’re able to do that each and every time. These guys did such a good job in the pits all day, and Jon and James did a great job out there driving. They brought me the car in the lead with a few hours to go and I was able to get in there and keep our head down and finish the job off.

“We never got sidetracked. We were able to stay out of trouble all day. Staying out of trouble and being able to bring it home in one piece is what it’s all about. You’ve got to be there to fight at the end.”

James Gue
Driver: No. 54 ORECA FLM09
“To start the race is something I don’t typically do so it was a little bit different to be put back in that scenario. It went very well. I was given the directive to stay with the lead group and keep it clean. I was able to do that, so that all went smoothly. Then obviously the second stint, I had to give the car in a good spot to Colin. I was able to come in, in the lead, and Colin took it from there.

“My second stint was really fun. My back-and-forth with the No. 09 got a little bit closer than I wanted it too. I kind of got caught up on the restart there when the whole pack of DP cars came by. But I managed to recover from that and retake the lead. Then I got caught up in traffic again, and we went back and fourth. But ultimately I was finally able to pull away there at the end.

“It’s kind of surreal actually to think back to where I was two months ago, not even be sure if I was going to race at all this year. To be able to fast forward with having won two of the biggest sportscar races in the world, I’m very grateful for the opportunity that Jon and everyone at CORE has given me. It’s just an awesome feeling.

"This year being the first of the combined series, that’s very unique. This is the first time sportscar racing in the United States isn’t divided. It’s not Grand-Am and IMSA anymore, its one series. Its pretty special to know your racing is the best-of-the-best here."