Pierre Fillon, president of the Automobile Club de l’Ouest (ACO), will have the honor of giving the start of the Rolex 24 At Daytona on 25-26 January 2014. David Hobbs will serve as Grand Marshal.

Pierre Fillon, the eighth president of the ACO, which created the 24 Hours of Le Mans in France in 1923 and will celebrate its 82nd edition in 2014, has been given the honor of starting the 2014 Rolex 24 At Daytona. President Fillon will wave the starter’s flag to launch the event.

This great honor highlights the indispensable role played by the Automobile Club de l’Ouest in the merger between the American Le Mans Series and the Grand Am Road Racing Series in the creation of the new North American Endurance Championship named the Tudor United SportsCar Championship, the opening round of which will be the 2014 Rolex 24 At Daytona.

In June of this year, Pierre Fillon invited Jim France, Chairman of International Speedway Corporation, creator of the Grand-Am Road Racing and Vice President of NASCAR to serve as Honorary Starter for the 2013 24 Hours of Le Mans.

The ACO, which is investing all its passion in the development of endurance throughout the world, is the promoter and organiser of the FIA World Endurance Championship and was also the creator of the American Le Mans Series in 1999 with its partner, Don Panoz, the European Le Mans Series in 2004 and the Asian Le Mans series in 2013. 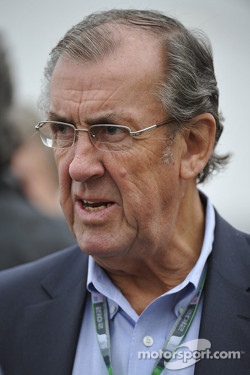 British sports car legend and racing commentator David Hobbs has been named as Grand Marshal for the 52nd running of the Rolex 24 At Daytona.

Hobbs, a versatile driver, who competed in many forms of motorsport including sports cars, NASCAR, IndyCar and Formula One, took part in all the major events worldwide starting with the Rolex 24 Hours of Daytona, the 500 Miles of Daytona, the Indianapolis 500 Miles and the Le Mans 24 Hours. He started the Sarthe classic on 20 occasions scoring two category wins (1962: 1st in GT1.3 in a Lotus Elite and 1982, 1st in IMSA GTX in a Porsche 935) and his best overall results were 3rd in 1969 (Ford) and 3rd again in 1984 (Porsche 956). As Grand Marshal he will deliver the starting command “Drivers, start your engines,” and he joins other racing legends such as Hurley Haywood, A.J. Foyt, Dan Gurney, Vic Elford and Brian Redman.

Inducted into the Motorsports Hall of Fame of America in 2009, Hobbs also appeared in the movie Cars 2 as announcer “David Hobbscap,” a 1963 E-Type Jaguar.

“David Hobbs’ starting command and the waving of the starter’s flag by Pierre Fillon will kick off a new era in North American sports car racing,” Daytona International Speedway President Joie Chitwood III said. “The anticipation for the upcoming Rolex 24 is at an all-time high and we’re looking forward to kicking off the new season and the new championship with a historic event.”