Ram Racing, has put together a truly all-star driver line up for its entry in the Dubai 24

European Le Mans Series Championship-winning GT team, Ram Racing, has put together a truly all-star driver line up for its entry in the Dubai 24 from 9-11 January with the express purpose of giving the team its best possible start to 2014.

A two-time ALMS champion and former F1 driver from Denmark, Magnussen is no stranger to the Ferrari 458 Italia GT3 following a 2013 season in the International GT Open with the Italian marque. It should be remembered that the ever-popular driver made his debut in GT racing in 2003 in a Ferrari! 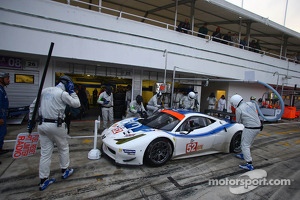 Team Principal Dan Shufflebottom is delighted to have persuaded Magnussen to make his debut in the Dubai 24H with Ram Racing, especially as it comes in the middle of a very busy period leading up to the opening round of the 2014 Tudor United Sportscar Championship in the USA.

“It’s quite exciting for us to have an ALMS Champion to add to our driver line up,” comments Dan. “Before he re-signed with Corvette Racing and the various calendars were confirmed, I’d spoken to him about being with the team for 2014. Although a full season with us wasn’t possible, it’s great he agreed to still do Dubai with us.

The former F1 technician, who led the new-for-2013 team to championship success in its inaugural year of competition, added: “Jan, combined with Johnny and Matt, makes for an extremely good line up and I’d say we are definitely looking for good result compared to last year which was our first competition event.”

Ram Racing newcomer Magnussen is enthusiastic about making his debut in Dubai: “I’m really looking forward to my first Dubai 24H and I think we should have a good shot at success. I’ve got to know the Ferrari GT3 pretty well from the GT Open and I’ve got great faith in Ram Racing and the guys in the team who have proven themselves to be race and championship winners in a very short space of time. It’s going to be an extremely busy January but I’ll just be taking each event as it comes and trying to make sure I don’t miss any flights!”

Although a relatively new event, the 24 Hours of Dubai has grown considerably in stature over the past few years and the ultra-modern 5.39km Dubai Autodrome track has become a favourite of drivers. It offers a combination of high-speed straights and technical corners which, combined with the size of the entry-list, makes it a challenging prospect for all competitors. Ram Racing’s 2013 race ended in the 14th hour following contact by a slower car, but the team is determined to not only finish the 2014 event but to finish on top.