The Spirit of Daytona team took the overall victory in the Sahlen Six Hours of the Glen Sunday.

Watkins Glen, N. Y. – The Spirit of Daytona Corvette DP team of Richard Westbrook and Michael Valiante pounced when it counted and came away with a victory in the 33rd running of the famed Sahlen’s Six Hours of the Glen at Watkins Glen International. The winners came from the fast Prototype class.

The fourth longest race of the TUDOR United SportsCar championship was witnessed by a large crowd that jammed into the iconic track. With 55 cars in four classes, the spectators and the competitors saw plenty of action.

Until a pair of caution flags slowed the field in the final 20 minutes, the OAK Racing Morgan Nissan of Alex Brundle, Gustavo Yacaman and HoPin Tung had a commanding lead and looked like winners, but on the first of two restarts, Brundle got caught up with the lapped car of Burt Frisselle, not only losing his momentum but the lead as well.

Westbrook pounced when he saw what was happening, taking the point and racing to the checkered flag. A final restart took place with two minutes to go, but Westbrook wasn’t to be denied. The margin of victory was a scant .877 seconds 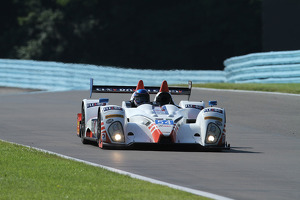 For the Troy Flis-owned team, they won for the first time in two years after winning three times in 2012. The winning team led 98 of the 191 laps covered.

“Our approach in the last couple of races was to play it safe and allow us to get a podium or maybe a win,” Valiante said. “For the last two races, we have had a quick car, and it seems to get better with each race. Hopefully, we are on a roll after today’s win and the runner-up in Detroit.”

Westbrook stated, “It was massive relief for us to get a victory after our success in 2012. We will take the win, but I really feel for the OAK guys. We had a great race for six hours, but they were unlucky on the next-to-last restart, getting pushed out by the lapped car. When they happened, it gave me an opportunity and I got a nice run. With more straight-line speed, I was able to make it stick. It is a massive result for our team after wrecking in Daytona in December. I am proud to be part of this team.”

The OAK Racing team took second followed by the Action Express Racing Corvette DP of Joao Barbosa, Christian Fittipaldi and Burt Frisselle. Although frustrated not to have gotten the win, Brundle said without the two yellow flags at the end, he would have had to stop for fuel. Said the rising star, “It was a good result to get the podium, and it looked like we would have it but the straight-line speed of the (winning) DP played us out of it. I did give it my absolute best, but the win wasn’t to be.”

In the PC class, Colin Braun and Jon Bennett were convincing victors as extensions of their accomplished season. “It is so good to do so well in the most important endurance races of the season, and we have good chemistry,” Bennett said. Added Braun, “We got behind after having a lap lead, and I don’t know how it happened. It is really cool to win this race and it helps our quest to win the championship.” 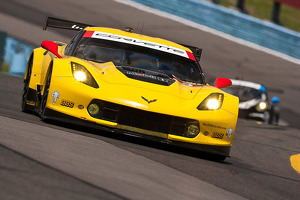 Said Magnussen, “I am so pleased for how things have gone with developing this car. We have a fantastic race car. In this category, you have to be on your game or otherwise you will lose it the competition is so good.’

In GTD action, Dane Cameron and Markus Palttala led the entire distance to gain the victory rostrum. Said Palttala, “It was a picture-perfect day for us. We took the lead in the first turn and never gave it up. Everything went according to plan, and we were able to avoid any hassles.”

Added Cameron, “I am happy to check the box for winning at Watkins Glen, and it is a good day to be a race driver when your race goes like this one.”

Four caution flags slowed the race for 17 laps, including seven laps at the end. In the final accident, Scott Pruett got rammed from behind by PC driver Renger van der Zande. Both cars were wrecked. While Pruett was able to walk away, he did do with a limp.

Countdown to the championship results Saturday from Las Vegas

Countdown to the championship results Saturday from Las Vegas