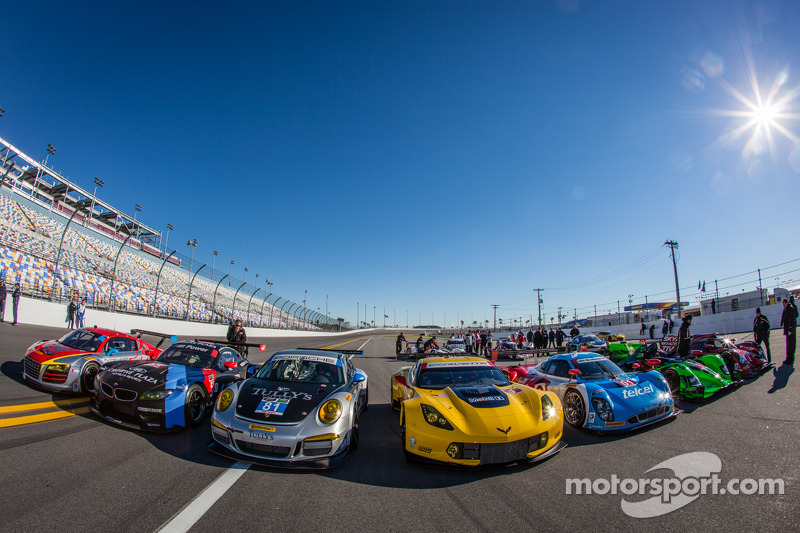 A total of 11 official automotive partners are competing this year in IMSA, 10 in the inaugural TUDOR Championship season.

DETROIT – With the hub of America’s automobile industry as a backdrop, the International Motor Sports Association (IMSA) and its top-tier TUDOR United SportsCar Championship are showcasing an impressive lineup of both U.S. and international automotive partners this week, leading up to today’s Chevrolet Sports Car Classic presented by Metro Detroit Chevy Dealers.

A total of 11 official automotive partners are competing this year in IMSA, 10 in the inaugural TUDOR Championship season. That sort of involvement, which is critical to success, also was central to the original vision for the championship, which resulted from the merger of the American Le Mans Series presented by Tequila Patrón and the GRAND-AM Rolex Sports Car Series.

All official automotive partners have a voice in shaping the present and future of IMSA through representation on IMSA’s Manufacturer Advisory Council (MAC). The second MAC meeting was held here in Detroit on Friday after an introductory meeting held at Long Beach in April.

“This commitment by our automotive partners encompasses showcasing their products in IMSA's competitive racing environment and marketing activation supporting the championship,” said IMSA CEO Ed Bennett. “Clearly, manufacturers are looking at the TUDOR Championship as an unmatched place for our participating manufacturers to further their overall business. Our series also provides substantial opportunities for manufacturers to showcase their technology and innovation. This is truly a premium series that is based on the participation of premium manufacturers.”

Following is a rundown of the 11 automotive partners’ 2014 efforts:

BMW: BMW Team RLL’s No. 55 Z4 GTE has raced to first place in the GT Le Mans (GTLM) class team standings; BMW is second in the GTLM manufacturer standings. In GTD, the No. 94 Turner Motorsport BMW Z4 picked up its first victory earlier this month in the Continental Tire Monterey Grand Prix powered by Mazda at Mazda Raceway Laguna Seca. BMW is fourth in the GTD Manufacturers Championship. … In the IMSA Continental Tire SportsCar Challenge, BMW is dominant, leading the Grand Sport (GS) Manufacturers Championship battle and holding second place in the Street Tuner (ST) class. BMW M3s race in GS, with 128i and 328i models in ST.

Chevrolet: In the headlining Prototype (P) class, Corvette DP teams are first and second in points, with Chevrolet leading the Engine Manufacturer Championship. The No. 5 Corvette DP from Action Express Racing opened the TUDOR Championship with a victory in January’s Rolex 24 At Daytona. In GTLM, Corvette Racing is second and fourth in team points and Chevrolet is third in the manufacturer points, running Corvette C7.Rs. The No. 3 Corvette C7.R has a two-race winning streak, taking GTLM victories in the Tequila Patrón Sports Car Showcase at Long Beach in April and at Mazda Raceway earlier this month … In the Continental Tire Challenge, Chevrolet, with Camaro Z/28.R entries, stands second in GS manufacturer points.

Ferrari: Regarding the Prancing Horse marque, 458 Italias have produced a current first-place standing in the GTD manufacturer standings, led by the No. 555 AIM Autosport entry which leads team points. The No. 555 team put Ferrari into the win column early with a GTD victory in the Rolex 24 At Daytona. Ferrari is fifth in GTLM points.

Ford: Led by the flagship Chip Ganassi Racing No. 01 Ford EcoBoost/Riley entry that is second (tied with a Corvette DP) in the P class team standings, Ford in second in the class’ engine manufacturer points. The “Blue Oval” visited Victory Lane at the Mobil 1 Twelve Hours of Sebring Fueled by Fresh From Florida in March for the first time since 1969, and added a second consecutive victory at Long Beach in April. … Ford Mustang Boss 302 R entries compete in the Continental Tire Challenge.

Honda: Third place in the P class manufacturer standings this week comes on the strength of a first-ever TUDOR Championship victory by a HPD ARX-03b entry, courtesy of the No. 2 Tequila Patrón Extreme Speed Motorsports team at Mazda Raceway Laguna Seca. … In the Continental Tire Challenge, Honda is fourth in ST manufacturer points.

Porsche: Multi-faceted involvement results in first place in the GTLM Manufacturers Championship standings based on Porsche North America’s third- and fifth-place positions in team points with 911 RSR entries. The team’s No. 911 entry opened the year with a Daytona victory, while the sister No. 912 entry made it two-in-a-row for the German marque at Sebring. Porsche is also tied for first in GTD manufacturer standings based on four different teams in the top 10, all fielding Porsche 911 GT Americas. The No. 44 Magnus Racing Porsche team won at Sebring. … In addition there are the Porsche GT3 Cup Challenge USA by Yokohama and the Ultra 94 GT3 Cup Challenge Canada by Michelin, two IMSA-sanctioned developmental series.

SRT: Fourth in the TUDOR Championship’s GTLM manufacturer standings with a pair of SRT Viper GTS-Rs being raced and a best run to date of second at Sebring by the No. 93 team. SRT is fifth among GTD manufacturers with the No. 33 Riley Motorsports SRT Viper GT3-R.

Westbrook pumped about pole in Chevrolet's back yard

Retro: Why this Lotus 72 was Piola’s “most important” F1 drawing