What are Wayne Taylor's thoughts at the constant balance of performance changes?

Wayne Taylor’s Corvette DP finished second in the season-opening Rolex 24 at Daytona. Another Corvette won the race and two more finished third and fourth, respectively. The best legacy LMP2 car finished fifth, but was well off the pace of the legacy Daytona Prototype cars.

In attempt to balance the performance of these disparate cars and engines, United SportsCar Championship officials have reduced the diameter size of the air restrictors on the Corvettes and set the maximum revs on those engines to 7450. They have also given the Ford-powered DPs a slightly larger engine air restrictor.

These changes have caused some concerns among team owners, notably Taylor, who spent quite a bit of money in the off-season to update his car to the series’ 2014 specifications. 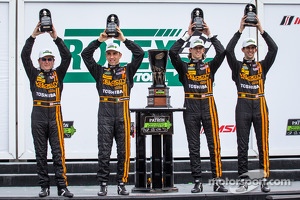 “We bought six-speed gearboxes, paddle shifters, traction control, fly-by-wire, and diffusers. We have to redesign and build a new car around the same old chassis. Then we do all of that and we go to the first [pre-seasons] test and [series officials] say you’re too fast. So now I have to spend another $1600 to make my car slower. I have explained to [the series] many times . . . ‘Where do they think we can just suddenly find this money’?

“Every time I look at my phone, there’s a new bulletin.”

While new bulletins no longer surprise him, Taylor is surprised that the series has not made any changes to make the LMP2 cars a little more competitive.

“I was waiting for [the series] to do something dramatic to the LMP2 cars,” Taylor said. “But why don’t they go and get people to watch and understand which each team does. Some of those LMP cars close to me [at Daytona] . . . all they did was wipe the bodywork. I never saw them do anything with the brakes. I never saw them do anything. If you’re racing at this level, you have to tweak every single piece.”

Despite these complaints, Taylor thinks the series has done a reasonably good job under difficult circumstances. He just wants the series to reduce the extra boost level it has given to the Ford-powered cars and then stop making changes to the rules.

“To continually [change the rules] is going to wear me out,” he said. “And I’m tired of being worn-out. They have got to start understanding that we all can’t find enough money to run in a series – like this – at the highest level. The budgets are going through the roof. And we’re doing 11 races. Go sell a corporate budget for $4.5 million . . . . It doesn’t happen.”

Ryan Preece both happy and frustrated with "intense" 500 debut