Long Beach, California - April 09, 2003 - Malaysia's ex-Formula 1 driver, Alex Yoong, who turned in an impressive debut in Round 2 of the Bridgestone Presents The Champ Car World Series Presented By Ford in Monterrey, Mexico two weeks ago, has been ...

Long Beach, California - April 09, 2003 - Malaysia's ex-Formula 1 driver, Alex Yoong, who turned in an impressive debut in Round 2 of the Bridgestone Presents The Champ Car World Series Presented By Ford in Monterrey, Mexico two weeks ago, has been confirmed by Dale Coyne Racing for the remainder of the 2003 CART season, beginning with this weekend's Toyota Grand Prix of Long Beach in California. 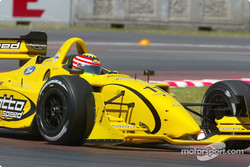 "We would like to welcome Alex on board our team once again. He will definitely start the Long Beach race this weekend alongside our regular driver, Joel Camathias," said owner, Dale Coyne. "Alex's solid performances at Monterrey and during our 1-day test have convinced us that, given the opportunity for a full season ride, Alex will show the world his competitive abilities."

"Alex is great to work with and he has the talent and potential to be on the podium this year once he learns more about the Champ Cars after getting a late start to this season. We are expecting great things from him this year," added Coyne.

The number 11 Lola/Ford/Bridgestone car will be the mount for Alex for the remainder of the season. The team is planning additional testing as the busy summer swing begins.

Yoong, meanwhile, is looking forward to the Grand Prix of Long Beach which is reputed to be the biggest Champ Car race of the year in the States as well as being an event steeped in tradition. "I'm very happy to get Dale Coyne Racing's vote of confidence and, naturally, I'm excited about the prospect of doing the whole season, as well as being relieved that this is sorted out. We can now concentrate on the racing," said Yoong, enthusiastically.

IRL: Andretti getting comfortable with idea of retirement

Tight at the top between Aston Martin and Ferrari at Fuji