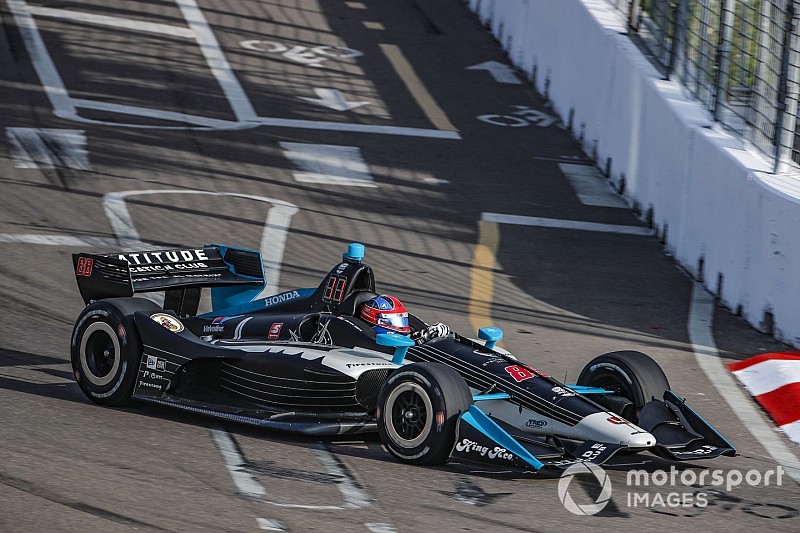 NTT IndyCar Series rookie Colton Herta says his drive in the season-opening St Petersburg race should have been a top five or even a podium finish if he had avoided a crucial error and/or hadn’t been disqualified from the Firestone Fast Six.

Herta’s Harding Steinbrenner Racing-Honda was third fastest in the Q2 session on Saturday, but when he inadvertently held up the Carlin-Chevrolet of Charlie Kimball at the end of the session, his two fastest times were disallowed, he didn’t advance to Q3, and was forced to start from 11th.

From there, the #88 HSR entry looked as strong as any of its sister cars – HSR has a technical partnership with Andretti Autosport – but the difficulty in passing due to tire-marble build-up, along with an error on a restart, restricted him to eighth.

“That was tough, really tough,” he told Motorsport.com. “I was happy with the handling, I wasn’t happy with the end result and I think we definitely have some stuff to work on.

“Obviously I’m still learning and I made a pretty big rookie mistake on a restart. I lost time when I slapped the wall at Turn 3. Fortunately I pancaked it [struck with both left wheels] but still I hit it hard enough that I thought something was broken. But amazingly it stayed together.

“But bringing the black tires up to temperature is so difficult on the restarts, and I just didn’t realize it until then. So that was hard.”

Talking of his ultimate potential in what was only his second IndyCar race, the 2018 Indy Lights runner-up said: “We definitely had the pace to be in the top five if we’d been mistake-free. If we’d started where we were supposed to start, again I’d say top five and maybe even top three. We were having to do some major fuel-saving at the end and we were still running very competitively, looking at the laptimes the leaders were doing.”

Physically, the tall and thin Herta admitted he was struggling in the final stint.

“I was pretty tired toward the end, and I think that’s because it’s the first race,” he said. “You haven’t driven that many consecutive laps for six months – or not in this type of car anyway. Obviously I did the Rolex 24 in the BMW M8 but the power-steering in that thing is brilliant!”

Herta was positive as he looked ahead to the second round at Circuit of The Americas, where he topped three of the four session in Spring Training in February.

“We always have stuff to learn, right, especially as a rookie in a young team,” he remarked, “but from the testing we did there, I think as a team we have less to learn than some of the others. Even things like fuel saving – I was practicing a fair bit there, and I don’t think a lot of others did get the chance to do that.

“I’m confident we have a really quick car there, and we got quite a lot done after the test too. So yeah, I’m hopeful we’ll get a chance to show that again next race.”