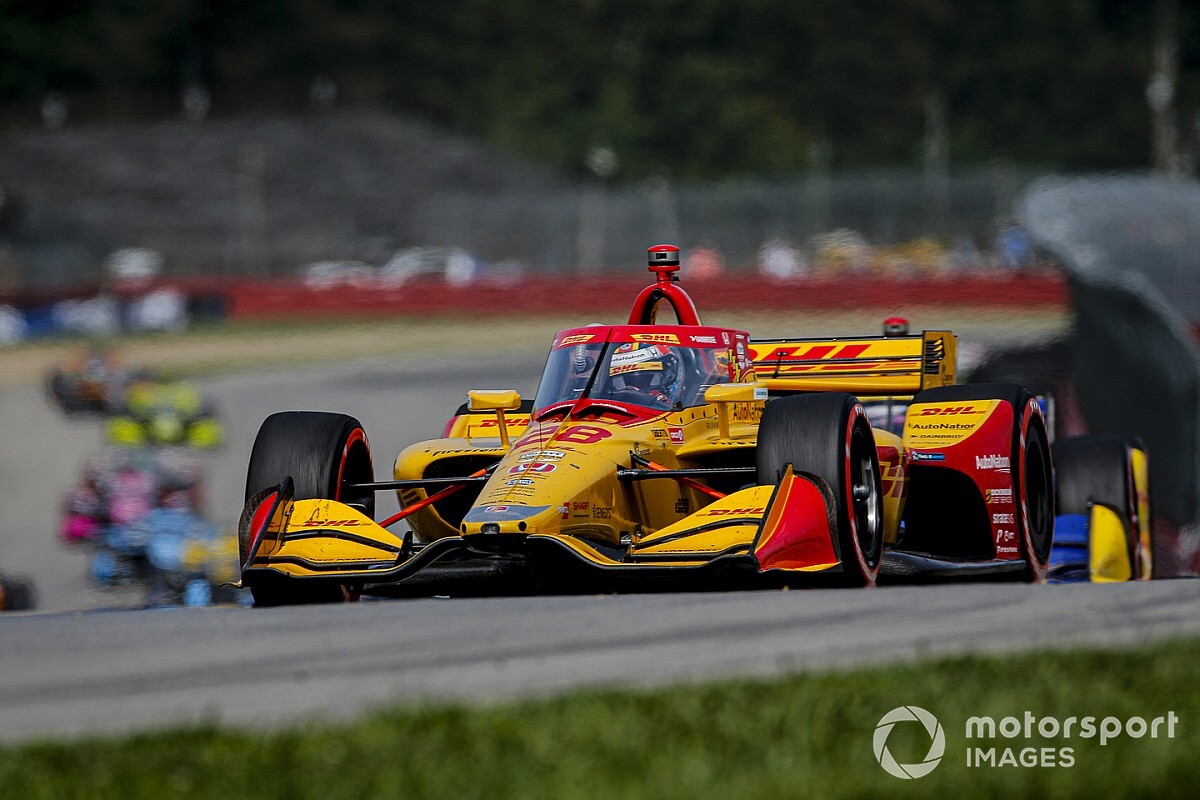 Although happy to see his team score its first win of the season, Ryan Hunter-Reay was left frustrated at what he feels were missed opportunities in the Mid-Ohio double-header thanks to pitstop strategy on Saturday and questionable track ethics from Scott Dixon on Sunday.

The 2012 IndyCar champion started yesterday’s race from the front row, but was demoted to third at the start by Team Penske’s Josef Newgarden. Hunter-Reay remained third until the final pitstops when he was beaten by teammate Alexander Rossi who had stopped a lap earlier and by Graham Rahal who stopped two laps later.

In the second race, Hunter-Reay attempted to pass Dixon’s Chip Ganassi Racing-Honda around the outside at Turn 4 on Lap 20, for what would have been second place once the off-strategy cars cleared out of the way. Instead, Hunter-Reay found himself knocked toward the grass on the outside of the turn, and the subsequent loss of momentum allowed Rossi to slip through into second.

“It's a good day for Andretti Autosport, finishing 1-2-3. It's been a pretty rocky season for the team overall, so it was nice to get that in,” said Hunter-Reay whose last win came at Sonoma in 2018. “For me, just missed opportunities kind of all weekend… We had good pace, just feel like we could have finished up a few more spots every day.

“But all in all, ran a good race today. Was running hard with Dixon there, got hip-checked off the track. That's when Rossi got by me, and we finished in line from there.”

He said that the frustration started in qualifying on Saturday, when being fastest in the only practice session gave him the choice of his qualifying group running first or second in qualifying. Assuming the track would be faster the more rubber went down, Hunter-Reay decided his group would run second… but Will Power’s time for Group 1 actually proved faster. The groups then swapped order for this morning’s qualifying session, which meant Hunter-Reay’s group went out first and therefore got the worst of the wet-but-drying track, and so he lined up eighth.

“I think we were actually really good in qualifying this weekend… The #28 has been the highest qualifying car of the year so far. It's just we haven't been able to put it together for one reason or another. But being fastest in practice Saturday morning, we picked our group, and it ended up being the wrong pick. Obviously that [also] dictated pole today, being that the group that was on pole was Colton's group, on a drying racetrack. Just the wrong call. We couldn't foresee that coming.

“On these shortened double race weekends [we miss] the extended practice time we would usually have to get ready for qualifying, and it all comes down to that at some of these tracks where it's very track position related. Like Gateway, for instance: once you settled into a rhythm, that was where you ran. But yeah, we've had the speed this year, just haven't been able to put it together…

“I don't know, I'm just a little frustrated today. I was running second, went around the outside of Dixon. I think Dixon and I have raced each other clean hundreds of times – I've never been hip-checked off the track by him and I've never hip-checked him off the track. But hey, that gave Alex the position and I finished third.

He later added: "This was nice to get in there, but from my perspective, the #28 side, I'm not really happy unless we're winning. We still have work to do there, and we need to get on the top step.”