The confusing qualifying at Iowa has Will Power on pole.

After penalties moved provisional pole-sitter Helio Castroneves back in the field to the eleventh position on the grid, Power found himself on the point for the 2:30 PM EDT green flag on the small bullring of a circuit outside Newton, Iowa.

“We had a good car," said Power. "This track is mentally and physically exhausting. It should be fun race.”

Castroneves incurred the ten-spot penalty for an unauthorized engine change. Andretti Autosport's James Hinchcliffe and teammate Marco Andretti picked up the second and third starting positions, and Ed Carpenter was fourth to round out the first two rows of cars to start the race. 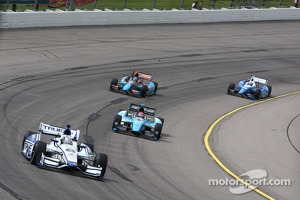 Despite the penalty, Castroneves earned bonus points from the qualifications results that keep him in the front of the IndyCar Series championship race, sixteen points ahead of defending series champ Ryan Hunter-Reay of Andretti Autosports.

Digging up Jimmy Hoffa in a cornfield in Iowa