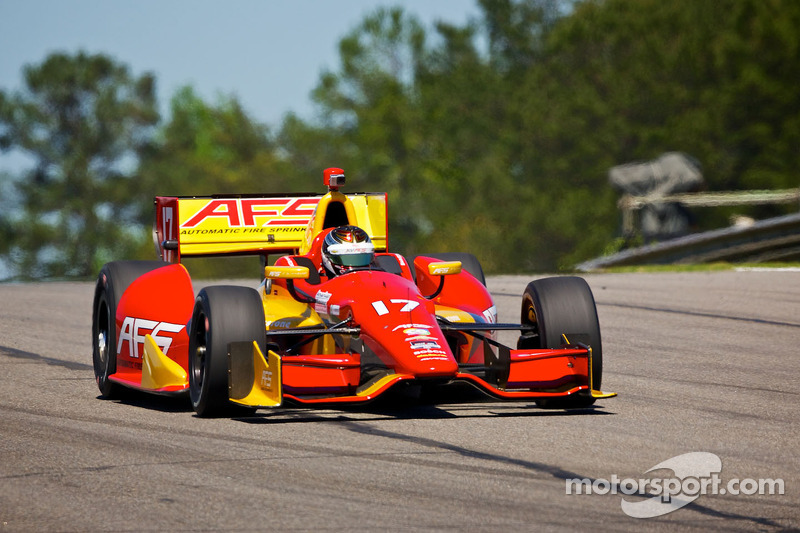 Saavedra was making his third start at Barber. Finished in top-20.

Saavedra, who was making his third start at Barber, qualified the No. 17 KV AFS Chevrolet/Dallara/Firestone entry 13th on the 2.38-mile, 17 turn permanent road course. After a two and a half hour severe weather delay yesterday, the race was declared a 100-minute timed race and mandatory rain tire start.

When the green flag was shown, Saavedra was forced to let cars by as the spray coming off the cars in front meant it was impossible to see. He then spent the next 18 laps at the back of the field until a caution flag was shown and the KV AFS crew decided that with the track still wet in some areas, Saavedra would stay out on the wet tires and build a gap at the restart rather than following the field onto pit lane. The 23-year-old found himself leading the race, for only the second time in his IndyCar career (the previous time being at Long Beach two weeks ago), however with it going from green to yellow in quick succession twice, Saavedra was unable to take advantage of the conditions. Having led the race for 11 laps, the track had now become too dry and unable to create a gap, Saavedra was forced to give up the lead, pit and rejoin the field towards the back. He remained there until the second round of stops, which saw him move to third, but shortly thereafter he made his second stop. With only five minutes remaining, the final yellow flag came out and Saavedra had to settle with 18th as the race ended under caution.

Saavedra earned 13 points today, which puts him tied for 13th in the championship standings with 55 points, just three away from 10th. In addition to his 18th place finish at Barber, which was his best in three attempts there, Saavedra finished 11th in the season-opener at St. Petersburg and ninth at Long Beach two weeks ago.

Commenting on the race, Saavedra said. "It was disappointing to finish 18th as we had been consistent in the top-10. We had an amazing car in the dry conditions, but in the wet we really struggled. At the beginning I had to let cars through because I couldn't see anything from the spray and once we got back into the race pace I didn't have anything. We had a great initial strategy by staying out longer than the rest, but by the end we couldn't make it work. We were the only ones that could have done a two-stop race because of all the fuel saving we had done, but by the race being shortened by that couple last yellows everyone was then on a two stop and we stuck at the back. We had an amazing car, so I am very proud of all the KV AFS guys. We go on to Indy and will get back to business. We are so close to getting something special; we just need to get all the bits working together."