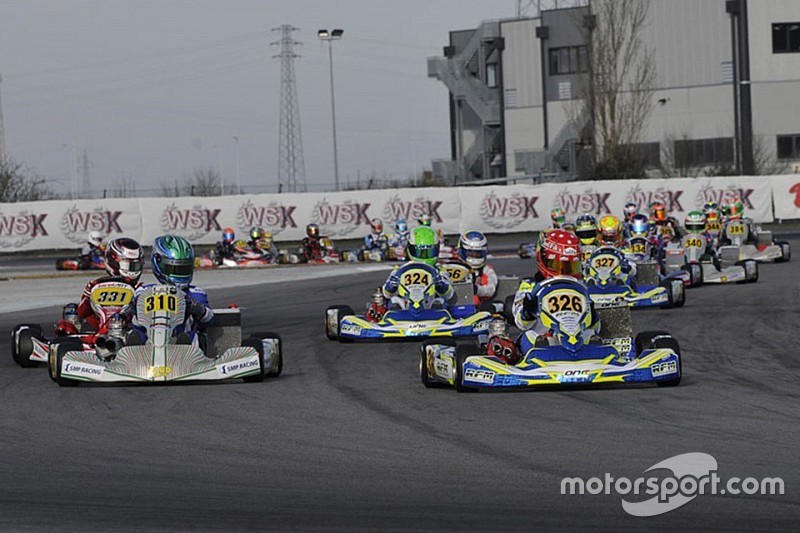 Two weeks after sealing the Winter Cup title, Nicklas Nielsen kicked off his 2016 WSK Super Masters campaign with a victory at Laghi.

The first of the championship's four events was cut short by extreme weather on Saturday, forcing the heats to be cancelled.

The pre-final, which saw front row starters Logan Sargeant and Pedro Hiltbrand switch places, followed the qualifying directly as a result and was the only preparation before the main race.

The OK final kicked off in a chaotic way with several frontrunners falling out of contention including American prodigy Sargeant.

Kicking off the race second, Sargeant was sent into a spin by Tom Joyner even before Turn 1 and could only gain seven places from the back to end up 19th.

Pole-sitter Hiltbrand led the first half of the race but was overtaken by both Joyner and Nielsen.

The Dane soon made a move on Joyner as well and built a lead safe enough to cruise to the finish.

Hiltbrand also managed to take his place back from Joyner, the Briton dropping as low as fifth before receiving a time penalty and finishing only 11th.

Moroccan youngster Sami Taoufik became the third different junior winner of the 2016 season in as many races.

Taoufik kicked off the race from pole, leading a Ricky Flynn Motorsport 1-2-3 on the grid.

However, it was only him managing to stay ahead as Timothy Peisselon and Fin Kenneally both lost a couple of places during the opening stage.

Isac Blomqvist and David Vidales emerged as Taoufik's main rivals for the rest of the race but the trio completed the podium in an unchanged order thanks to the lack of overtaking attempts.

Sodikart teammates Anthony Abbasse and Bas Lammers secured first and second in the category, which consisted of a mixture of KZ and KZ2 machineries.

Although the duo started from the second row, Abbasse was into the lead by the end of lap 2 after overtaking pole-sitter Paolo de Conto.

However, Abbasse failed to shake De Conto off and, after trailing the Frenchman for several laps, the Italian regained his spot only to fall back behind two laps later.

He dropped back to third this time, allowing Lammers to take second and, the Dutchman even claimed the lead in the penultimate lap but Abbasse fought back to win.

Pizzi holds off Cagliano for second race win of the year

The Giugliano Kart racer had a sublime start to the race, storming into the lead from fourth in just a couple of corners.

He never gave up his lead afterwards and saw the checkered flag first, just two tenths ahead of pole-sitter and fellow Italian Leonardo Caglioni.

Askew dominates DD2, but there are surprises elsewhere