The 55 cars entered for the 24 Hours of Le Mans 2014 have all passed successfully through the scrutineering process. A second day of technical inspection unfolded in a festival atmosphere.

This Monday the 9th of June, 33 cars were submitted to technical and administrative examination. A process that had several highlights.

The impressive armada of Ferrari 458 Italia entered by the AF Corse team did not gone unnoticed during the course of the morning before the first LM P1 cars entered the enclosure, in the shape of the two Rebellion R-One. Followed the compact group of four works Aston Martin ahead of the Porsche of IMSA Performance Matmut. The latter team, victorious in LM GTE Am last year, this time includes David Hallyday, also highly anticipated by fans of Le Mans. 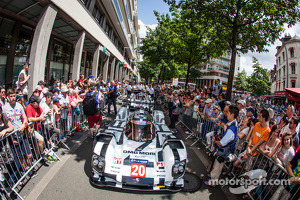 So far unknown to the public, Matthew McMurry impressed the audience in the grandstands as well as in the central enclosure when he explained that he will be the youngest driver to take the start of the race. Born on the 24th of November 1997, he will be 16 years and 202 days old, almost a year younger than the current holder of the record, the late Ricardo Rodríguez who in 1959 was 17 years and 126 days old. This young American shares the wheel of the Zytek Z11SN-Nissan n°42 of Caterham Racing with Thomas Kimber-Smith and Chris Dyson. For comparison, the senior driver of 2014 is Howard Blank, driver of the n°62 Ferrari, aged 65. The average driver age this year is 34.

The late afternoon was marked by the arrival of the Audi team, the defending champions, whose drivers and cars took a long walkabout then were followed by the No.75 Porsche of Prospeed Competition with a livery that will excite all Bretons. 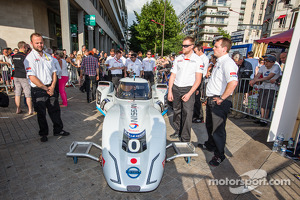 The work is by Belgian designer Loïc Poncelet, and it is a personal representation of Bretagne over water, fire and earth, the three legs are of the triskelion, the emblem of a region dear to the heart of François Perrodo one of the three drivers with Emmanuel Collard and Markus Palttala in the 911 GT3 RSR.

The 82nd edition 'pesage' concluded with Corvette Racing who had a surprise for spectators. For their fifteenth consecutive appearance, the American team hoisted a large banner ''Merci beaucoup aux Manceaux'' (thank you people of Le Mans) deployed to the sound of Bruce Springsteen during the group photo, punctuated by the sound of an American railroad horn!

The Le Mans week continues tomorrow with the group photo for the 165 drivers taking part, scheduled for 10:30 before the closed-door briefing with the sports authorities and their team managers. Finally, at 17:00 they will meet fans at the big autograph session and pit walk open to the public.

Practice is expected to take place in the sunshine that has settled on Le Mans!

Audi with most fuel-efficient powertrain at Le Mans