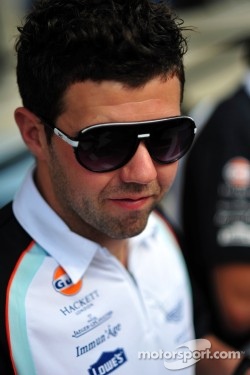 “Coming across the start-finish straight gives you a chance to check the pitboard for lap time and position, as well as talk to the engineers on the radio about fuel consumption and car behaviour.

“The right-hand kink after the pitlane exit is just about flat on low fuel, but you have to make sure you get the car over to the right for the first, uphill, lefthander. You’ve got to be precise through this chicane as you can damage the car on what we call the ‘yellow baguettes’ that sit close to the kerbs. It’s unsighted on the exit, too, because of the brow, so it’s easy to misjudge things.

“After coming under the iconic Dunlop bridge, you pick up speed quickly because it’s downhill into the first part of the Esses. There’s a change of surface here, too, so the grip levels can change through the race. You have to carry speed into the first left-hander, which is quite long. Getting on the power early helps you pop out over the camber change on the exit, which in turn helps with the speed down to Tertre Rouge. You have to be careful though – there’s no run-off there and any car damage means a long way back to the pits at the end of the lap!

“Tertre Rouge is much faster than it used to be – it’s now taken in fourth gear and you have to carry a lot of speed on the exit and what is the start of the Mulsanne Straight.

“You exit on the left but move naturally back over to the right for the shortest route through the long right-hander onto Mulsanne. You’re looking 200-300 yards ahead and planning whether you’ll be able to pass any GT cars before the first chicane. You need to minimise the number of times the car moves around on the straight because the crown in the road can add extra wear and tear to the floor of the car, and it puts extra strain on tyres and fuel consumption.

"Approaching the first chicane, you have to get your braking spot on at the 100-metre board. It’s easy to lock the unloaded right-front wheel as the car comes back over the crown towards the apex at turn-in. It’s a big stop – from 200mph – and the first time the pedal gets pushed hard for quite some time. The marker boards change colour from daytime to night-time because of the reflection so you have to remember that, too.

Mulsanne corner itself is tricky because you are braking hard from 200mph whilst turning.

“In the AMR-One you have to pick up the throttle early to allow the turbo boost to build, which is another reason you have to be careful. Thankfully, the electronic traction control works hard as you squirt out of the chicane.

“The blast down to the second chicane, which is a left-right configuration, includes getting the car back over to the right on the approach. It can be tricky in the wet on this stretch because the trees lock in the moisture on the track. You don’t want to lock up and skate off through all the debris.

“The old Mulsanne kink that dissected the straight in years gone by is easily flat so there’s nothing to worry about there. And the old brow on the approach to the Mulsanne corner at the end of the straight has gone now, too, which helps vision up ahead.

“Mulsanne corner itself is tricky because you are braking hard from 200mph whilst turning. The speed-scrub is dramatic – down to 45mph in first gear – and there’s little run-off there. It’s a good place to try to save fuel, too, by lifting off earlier, rather than relying entirely on braking. The LMP1 cars have so much downforce that lifting off slows the car quite significantly. The grip increases at Mulsanne as the race progresses and more rubber goes down.

“The next bit of the track is my favourite. You come out of Mulsanne corner and head towards the fast right-handed entry to Indianapolis. The road narrows here and you get that tunnel effect as you head between the trees. It’s made more tricky by the fact that at dusk and dawn you’re often looking into the low sun. It makes judging passing moves and braking points that bit harder.

“The right-hander at the start of the Indianapolis complex is great – a real heart-in-the-mouth corner. The sensible drivers brake beforehand, the brave ones just lift! You have to concentrate on keeping the car over the right for the next, banked left-hander. And there’s no real run-off on the exit, either. It’s another place where you can roll off the throttle to keep the fuel-consumption police happy in the Aston Martin Racing garage!

“Popping out of Indianapolis, being careful not to drop a wheel off the edge, you point the car down the short squirt to the right-hander at Arnage – my least favourite bit of the track. The grip level here decreases as the race goes on. It’s bumpy in the braking area, and there’s nowhere to go if you overdo it. You can flirt with the barriers a bit on the exit because carrying speed up to the Porsche Curves is important but it’s still a bit like threading a needle.

“Up through the gears again and into sixth, the approach to another great bit of the track, the Porsche Curves, is bumpy and wide so there is some experimenting to be done, depending on the traffic and the weather. You need to be passing GT cars before the Porsche Curves if you can because it’s very narrow as you head down the snaking hill. Plenty of drivers have been caught out there in traffic in the past. 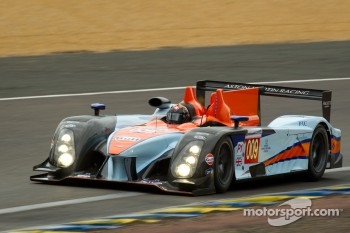 “The Porsche Curves are superb – you’re back on a conventional race-track surface so the grip levels go up again. It’s tough on the neck through here, especially at the end of a long stint with low fuel loads. You have to be disciplined because mistakes here are usually costly. In the wet, the water drains off from the campsite across the track, which you’ve got to look out for.

“The flat-out kink at the end of the Porsche Curves as you approach the final chicane now needs a bit more attention as they’ve added green matting on the exit. It’s tempting to use it to straighten out the corner, but it can cause problems, particularly if it’s wet. Curiously, you can smell all the barbeques as you come past there and see all the fans in the campsites. If you’re going to break down, that’s the place to do it!

"The Ford chicane at the end of the lap is relatively straightforward, as long as you watch out for drivers chopping across if they’ve made a really late call to come into the pits. Usually, you know if you’re pitting by the time you reach the Porsche Curves, but sometimes you can get caught out by others. The first part is taken in third gear, the second part in second, and you accelerate out onto the start-finish straight to start another lap of one of the world’s greatest racetracks."

The Key To Victory In The 24H Le Mans: Zero

Fernandez: Local driver will be crucial to IndyCar success in Mexico

Adrian Fernandez has corner named after him in Mexico City