Audi at the front as night falls at Le Mans

The headlights came on and the times tumbled as the sun began to set over La Sarthe region as Le Mans 24 Hours entered its seventh hour. The two Champion Racing Audi R8s at the front of the field, driven by Tom Kristensen and Frank Biela ...

The headlights came on and the times tumbled as the sun began to set over La Sarthe region as Le Mans 24 Hours entered its seventh hour. The two Champion Racing Audi R8s at the front of the field, driven by Tom Kristensen and Frank Biela respectively, along with the Jim Gainer International Dome Mugen of Ryo Michigami, Jean-Marc Gounon in the Audi Playstation Team Oreca and the Rollcentre Racing Judd of Joao Barbosa in third, fourth and fifth respectively, all traded personal fastest laps. 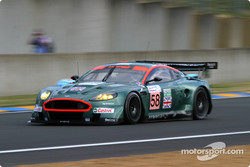 The Rollcentre Racing Dallara Judd of Martin Short, Joao Barbosa and Vanina Ickx eventually suffered a power steering failure after the unit was leaking for the preceeding few hours and the team pitted for repairs for 20 minutes, effectively put the team out of contention after a strong performance in the first few hours of the race.

Some of the teams who had been affected by technical problems through the opening hours started to withdraw from the race. The #23 Gerard Welter WR LMP2 of Robert Julien, Sylvain Boulay and Jean-Bernard Bouvet retired after starting the race from the pitlane and then pulling of the circuit after four hours. The #20 Pierre Pilbeam JPX of Marc Rostan, Philippe Haezebrouck and Pierre Bruneau withdrew from the race with clutch problems, and the #39 Chamberlain-Synergy motorsport of Bob Berridge, Peter Owen and Gareth Evans eventually retired due to clutch problems after a series of technical difficulties.

The #85 Spyker Squadron C8 spun off the circuit into the gravel at Indianapolis, a high speed corner, with the rear of the car on fire. The car deposited oil on the circuit and this brought out the Safety Car for its second appearance of the race so far. The #34 Miracle Motorsports Courage AER of Ian James, John Macaluso and Andy Lally lost a left-rear wheel along the pit straight behind the Safety Car and had to be pushed to the pitlane for repairs.

The racing at the head of the GT1 class suddenly became close as the leading #58 Aston Martin Racing of Tomas Enge made a pit stop and dropped down to third in the class handing Corvette Racing a 1-2 in the class with Olivier Beretta one second ahead Johnny O'Connell, but then Enge retook the lead after the Courages made their pit stops. O'Connell then started putting in fastest laps as he followed the sister car around the circuit and the pair closed right up. The #59 Aston Martin was brought in for yet another penalty, this time for Darren Turner who had passed under yellow flags. "Of course time penalties are unfortunate but it's early days and I believe we can catch it up, " said team-mate David Brabham.

The GT2 class was very competitive as well with the Alex Job Racing of Marc Lieb just three seconds ahead of the White Lightning Racing of Timo Bernhard, and several of the following GT2 cars setting laps times very close to their fastest laps.

As the end of the eighth hour approached the lead Champion Racing Audi R8 pitted for a driver change and JJ Lehto took over at the front of the race.

Supercars season could run as late as February