LE MANS, FRANCE – The 24 Hours of Le Mans proved to be a troubling twice-around-the-clock experience for the majority of competitors from GRAND-AM and the American Le Mans Series (ALMS) presented by Tequila Patrón. 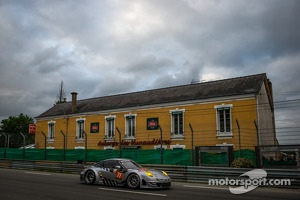 Sarrazin is with 8Star Motorsports’ Daytona Prototype team this year in GRAND-AM. He also has seven career ALMS wins. Over the last two days, he’s been part of a spirited challenge to Audi’s long-running Le Mans dominance, as co-driver of the No. 8 Toyota Hybrid, part of a two-car Toyota Racing effort in the headlining LMP1 class.

That effort came up one lap short, as Audi won for the 13th time since 2000, and Tom Kristensen extended his all-time Le Mans record to nine championships. Kristensen, Allan McNish – now a three-time champion – and Loic Duval co-drove their No. 2 Audi R-18 e-tron quattro for 348 laps on the 8.469-mile course.

Kristensen from Denmark, dedicated the triumph to his fellow Dane, Allan Simonsen, who died Saturday after an early-race accident in his Aston Martin.

Sarrazin, a test driver for Toyota when the manufacturer joined Formula One in 2002, was joined by Anthony Davidson and Sebastien Buemi in the Hybrid. Prior to coming to GRAND-AM this season he had made 19 ALMS starts.

“We made all the right changes during the race,” said Sarrazin. “And we made no mistakes on the track. But, we need a little luck, as well.

“This was a great result for Toyota and already, we are very encouraged for next year at Le Mans. We need to find a little more speed but now, we have very good base to work from.”

While Audi’s victory was more-or-less expected, in the production-based LM GTE Am class, a surprise courtesy of the ALMS brewed during most of the race.

Both the racing and entertainment worlds were poised for axis tilts, with the looming possibility of a podium finish for actor/driver Patrick Dempsey, who led GTE Am twice in the early Sunday morning hours.

“We were competitive the entire race,” said Dempsey. “This is really what you want to be. Patrick did a great job on his opening stint, Joe was incredible in what seemed like every session of his in the rain, and our Porsche from Proton Competition was perfectly prepared. It was just a great race, we came up just a little short on the podium, but we will reach that goal soon enough.”

Corvette Racing and the SRT Motorsports Vipers came to Le Mans gunning for a LM GTE Pro class showdown, not to mention a championship or podium finish. None of that materialized, with both teams hampered by abbreviated practice and qualifying sessions due to rain, accidents and safety barrier repairs.

That combination continued into the event itself, making the always-tough puzzle presented by Le Mans a bit unsolvable. Adding to SRT’s challenges was the fact that this year was a Le Mans return after a 12-year hiatus.

Which made Sunday’s results even harder to discern, challenges notwithstanding. Corvettes finished fourth and seventh in LM GTE Pro while the Vipers finished fifth and sixth in class.

“It’s definitely not been a typical Le Mans,” said Westbrook. “And sure, it’s frustrating, but it’s the same for everyone.”

Added Wittmer: “When we come back here again it’s going to be a different story, a totally different circus. It is so valuable to run here previously. You learn so much: temperature change, rain, everything. Everything plays into the effect of a car.”

Audi, Morgan and Porsche emerge victorious at Le Mans in a race marred by a fatal accident

Nissan success on and off track at Le Mans