Krohn Racing logistics facts for the road to Le Mans

A 17-day turnaround of all race equipment and personnel was all the Krohn Team had for all logistical movements.

Krohn Racing received a late invitation to the 2014 24 Hours of Le Mans race and had a very short window in which to prepare their Ferrari F458 and get all their racing equipment and team members to Le Mans, France in time for the official start of the week's activities. A 17-day turnaround of all race equipment and personnel was all the Krohn Team had for all logistical movements.

Below are some interesting facts and timeline specifics about the complexities of the logistical effort:

- Three Krohn crew members flew on June 2, via Milan, Italy, to Padova, Italy to the Michelotto shop to assist with the transformation of the Ferrari F458 from IMSA specs to the 2014 Le Mans GTE-Am aerodynamics package and Le Mans race engine installation. 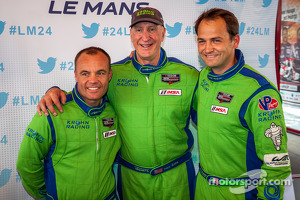 - Over 8,650 kilograms (19,000 lbs) of Ferrari racecar, spare parts, and the Ferrari engine were shipped from Houston, Texas to Le Mans, France, via air, water, and land.

- In the process of shipping parts and the car, the following transportation vehicles were used: a small van, a 40-foot curtain side truck, a car transporter, a 53-foot semi truck, a ferry, a Boeing 777, and a Boeing 747.

- On May 30, the No. 57 Krohn Racing Ferrari's spare parts were driven from Houston to Chicago, and were then put on a plane to London Heathrow airport on June 1. Once they arrived in London on June 2, the parts were driven and also rode a ferry to get to the Le Mans paddock from June 5-6. This task required seven days, door-to-door, and 12 people.

- The Krohn Racing Ferrari and engine had to make a stop in Padova, Italy at Michelotto's shop on their journey from Houston to Le Mans. On May 28, the car traveled from Houston to Luxembourg and then on to Padova on May 31.

- On May 27 the Ferrari engine was flown from Houston to London Heathrow, and rode in a van through the Chunnel under the English Channel, arriving at Michelotto in Italy on May 29.

- All said and done, almost 18,000 miles were covered in getting the Krohn Racing Ferrari race car and necessary race parts from the Krohn shop in Houston, Texas to the Le Mans paddock.

- 7.1 tons of freight were sent, which included seven freight boxes, the race car and engine.

- 24 people work for the Krohn Racing team during Le Mans week and air travel had to be arranged for 21 of them, with the furthest origination point being Perth, Australia (over 10,600 miles without layovers). The main Krohn Racing crew arrived in Le Mans on Saturday, June 7.

- All three Krohn drivers arrived into Le Mans on Sunday, June 8. Team owner/driver Tracy W. Krohn arrived directly into Le Mans by private jet from Houston, Texas, USA; Nic Jonsson flew commercial from his home in Atlanta, Georgia USA to Paris and took the TGV train to Le Mans; and Brit Ben Collins drove and went through the Chunnel from his home in Bristol, England.

- The Ferrari F458 arrived from Michelotto on Sunday, June 8, and finished the preparations. The three drivers and car went to ACO scrutineering on Monday, June 9 at 3:30 p.m.


- Krohn Racing plans to spend the three days after the 24 Hours of Le Mans race in their Garage no. 3 at the track to work on the Ferrari, preparing it for the next IMSA TUDOR Series race at the 6 Hours of Watkins Glen, June 27-29. The Ferrari race car, crew and all equipment will then depart Le Mans on Thursday, June 19, with the crew returning home and the car and the equipment being sent via London to JFK Airport in New York, from where it will be transported to Watkins Glen.