Guillaume Moreau has returned to his home region of Le Limousin after spending the last two-and-a-half months recovering at specialist rehabilitation centre The Arch in Le Mans. 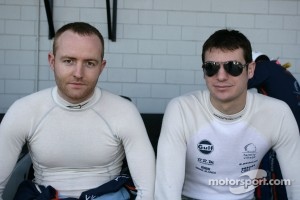 His violent accident at Circuit de la Sarthe during the Le Mans Test Day on June 3 caused severe trauma to his spinal cord that required two operations at the University Hospital of Angers. With the initial rehabilitation now complete, Guillaume will begin a new phase of recovery helped by the sports medicine department, headed by Dr Jean-Yves Salle, at the CHU Limoges.

Guillaume’s speedy progress at The Arch prompted doctors to cut short his stay, allowing him to return home and enjoy everyday life while continuing daily rehabilitation. Indeed, Guillaume is now walking, albeit without full fluidity, driving his car and even succeeded in cycling. The majority of his muscles have recovered their full movement in the timeframe expected by the medical team after his second operation, and in some cases even faster. And while complete sensitivity has not yet returned, the recovery process is continuing to follow a logical course that offers much hope for the future.

All of his energy has gone into this initial step of what will be a lengthy recovery process, but it is now vital that Guillaume spares some efforts while continuing rehabilitation to allow his body time to fully recover. It will only be after this phase that doctors can, at the end of the year, establish a prognosis for the level of ultimate recovery.

Guillaume Moreau, OAK Racing driver: “When I discover that I am not progressing fast enough, and feel that I have reached a plateau, I remember the diagnosis upon arriving at the hospital along with the wheelchair-bound future that had been predicted. But two-and-a-half months later I can walk, which is the first miracle. The aim of the surgeon who operated in Angers, Dr. Lucas, was to afford me an opportunity to get back in a racing car. December offers me a new target, when the first verdict will be given. I know that the road is still long and uncertain but I have the same objective as the surgeon. An accident like mine leads to much thought and awareness of, in particular, the question of safety which unfortunately requires accidents of this nature to take place in order for further advances to be made, but the passion is still there. I have also remained in very close contact with my team OAK Racing, with whom I have on-going exchanges.

“In the meantime, I am very happy to be back home and amongst familiar surroundings again. I will start rehabilitation at CHU Limoges, and in parallel can regain fitness thanks to my osteopath Patrick Jouhaud and my physical trainer Sophie Roulaud. Both have followed me for years and know me well. Theirs will be valuable support during this new phase, which might put my patience to the test!”

Jacques Nicolet, President of OAK Racing: “I am delighted that the quality of care he has received and his temperament as an elite athlete allowed Guillaume to shorten his stay in Angers and Le Mans, and return home sooner to Le Limousin, a region that matters so much to him. There he will rediscover on a daily basis emotional and sporting surroundings that will help aid his recovery. I also have great admiration and confidence in his fighting spirit that we see in life and on-track. Since the start his will has not ceased to surprise us all, including the nursing staff that have had to make a special effort to adapt to the extraordinary will of a patient who they have had to force to relax! He has demonstrated that the competition is not solely confined to the track and that current results suggest every outcome is still possible. For Guillaume this is the most important endurance race of his life and I know that whatever happens we will continue to team-up with him.”