The Moto2 and Moto3 riders worth watching in 2018 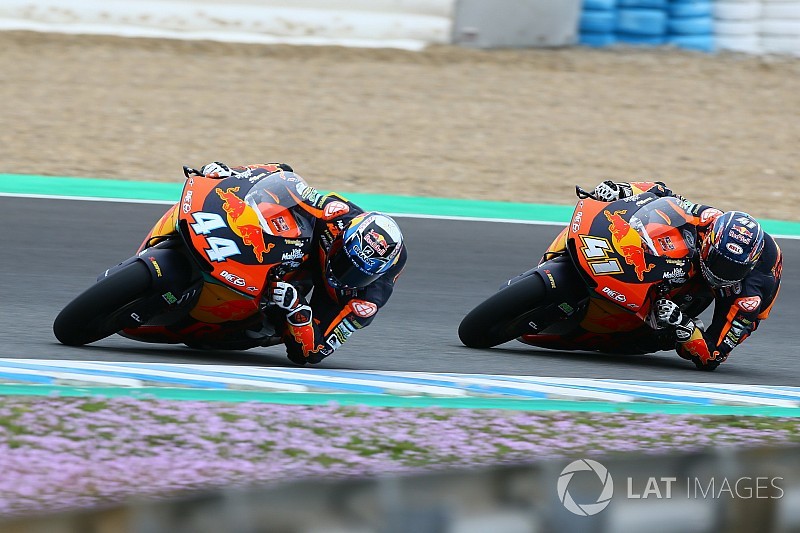 There are five MotoGP rookies on the grid this year, but even more hungry youngsters waiting to take their place. David Gruz and Lewis Duncan cast their eye over the hottest Moto2 and Moto3 prospects of 2018. 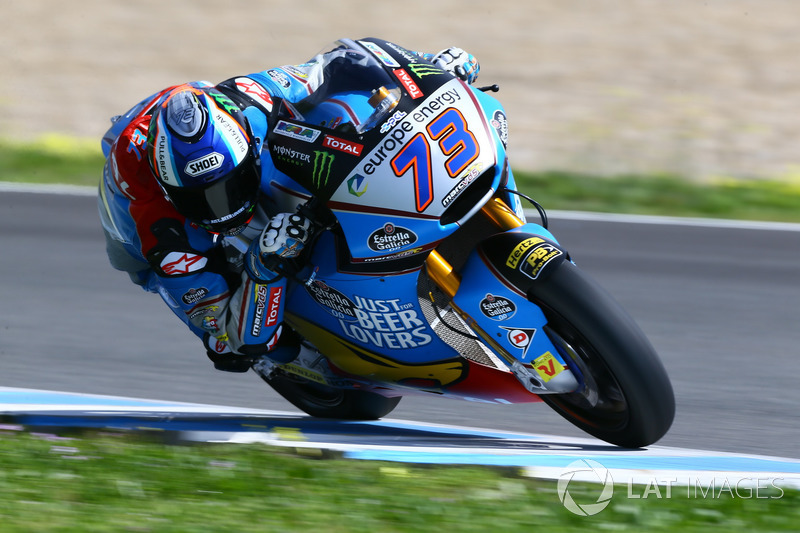 Last year, Alex Marquez proved he had the speed to fight for the Moto2 crown, often fighting with teammate and eventual champion Franco Morbidelli - but ultimately making too many mistakes to be in title contention.

With Morbidelli and his main title rival Thomas Luthi off to MotoGP, and now three years of intermediate class experience under Marquez’s belt, he has to be considered one of the favourites.

He continues with Marc VDS, the clear top team of last year, for a fourth consecutive season and now as the team leader – everything is there for him to deliver. There can be no more excuses.

Not too long ago, a move up to MotoGP for 2019 seemed rather straightforward – Marc VDS’s MotoGP team is a satellite of Honda, the same manufacturer Alex's older brother Marc is currently racking up titles for.

However, Marc VDS looking to switch manufacturers could complicate matters - and although he might still be the team’s main choice at the moment, he can’t afford to be beaten by his rookie teammate Joan Mir if he wishes to remain so. 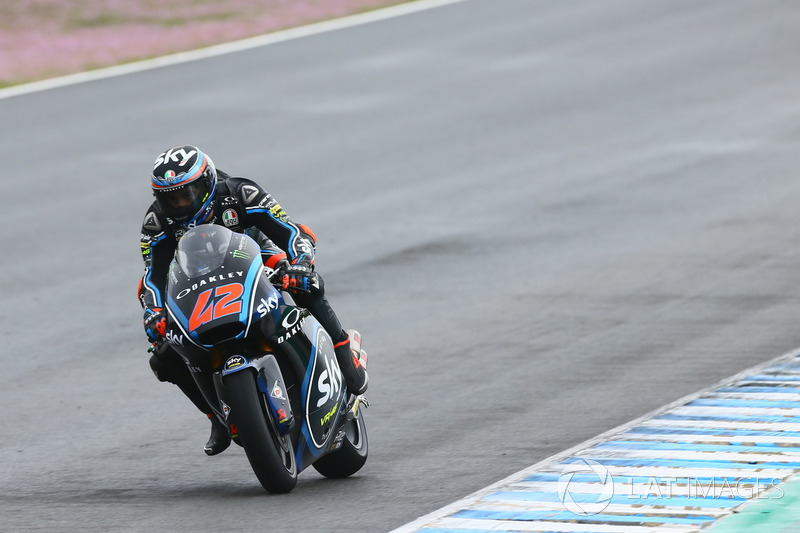 Contracts are signed in MotoGP earlier each year, but announcing a rookie before the previous season even begins is a big vote of confidence.

It speaks volumes of Francesco Bagnaia that, over his four years in the MotoGP paddock, he has never been in contention for a title, two of them being rookie seasons and the other two with the uncompetitive Mahindra package. And yet Pramac has picked him as one of its riders for 2019.

He massively overperformed with Mahindra in the 2016 Moto3 season and the following year, now in Moto2, he finished an impressive fifth overall as a rookie.

Only Marc Marquez, Maverick Vinales, Alex Rins and Andrea Iannone were in the top five as rookies in the intermediate class this decade, giving a very good indication of how big Bagnaia’s potential is.

The Italian is a clear title contender in Moto2 this year, showing strong pace in both Jerez pre-season tests. And, with his future already sorted, he can race without pressure, unlike his rivals. 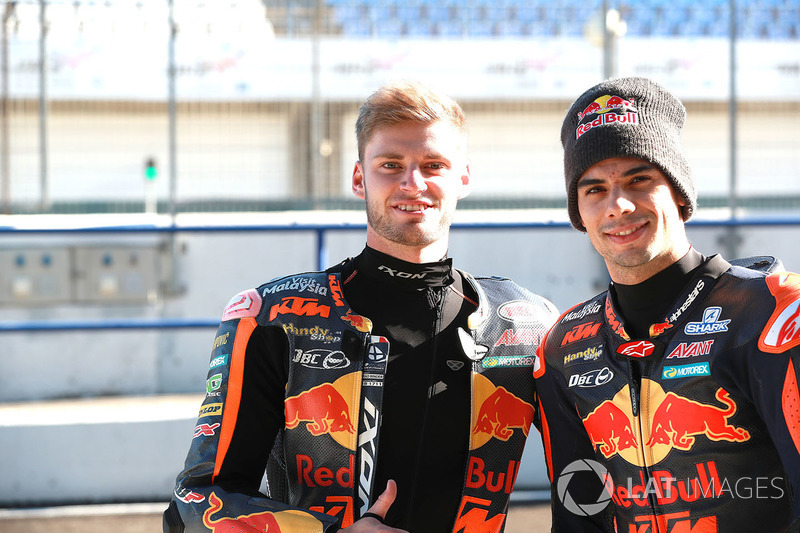 The way the 2017 season ended, with Miguel Oliveira winning the last three races and Brad Binder joining him on the podium on all of those occasions, shows KTM now has a proven race-winning package.

While it would be foolish to discard Kalex, which can count on Marquez and Bagnaia to lead its charge, the factory Ajo-run KTM team wins the award for the strongest rider duo in 2018.

Last year, Oliveira was one step ahead of Binder due to an extra year of Moto2 experience and the latter spending a big chunk of the season recovering from injury.

But with Binder becoming competitive at the very end of the season, and the South African being a little faster than Oliveira during the Jerez pre-season tests - even if the Portuguese maintained a slight edge in race pace - the duo look to be very closely matched.

Tensions within the squad could rise even more due to the fact both will be in contention for a KTM MotoGP seat in 2019.

Teaming up with Tech 3, which will act as a KTM junior team, the Austrian brand will have four bikes from 2019 onwards - and it’s keen to promote at least one of its juniors.

While it's not impossible that both Oliveira and Binder could make the step up, they will still be eager to establish themselves as the number one prospect and KTM’s first choice. 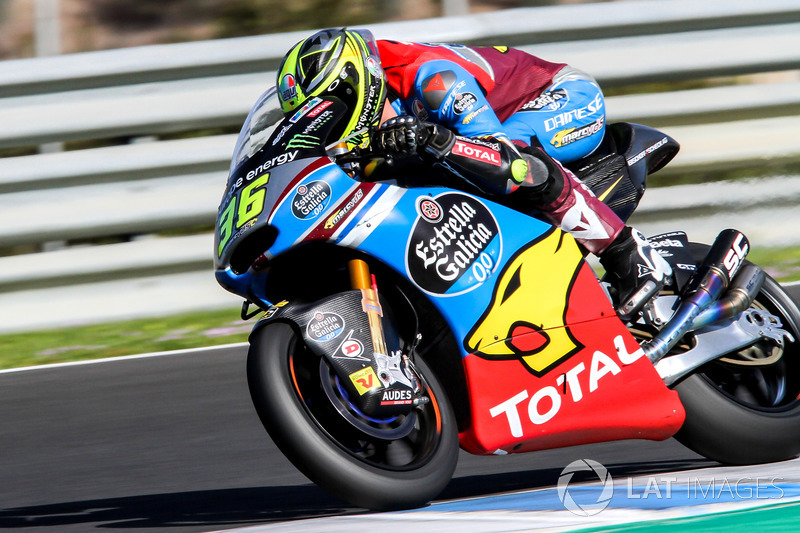 Last year all but confirmed that Mir is next in line for Spanish prodigy status, after he dominated Moto3, the series whose close and hectic racing makes it tough to stand out.

Expectations are therefore high as Mir steps up to Moto2, especially as the 20-year-old claims his preference is to go to MotoGP as soon as possible.

But, he'll need a meteoric start to the season to be picked up by Honda or another factory team, which seems unlikely after he had to miss one of the pre-season tests due to a motocross injury.

Securing a premier class graduation of some kind should be easier though, especially if he pulls off a few good results early in the season.

Already looking like the complete package and a very intelligent racer in Moto3, all Mir needs to succeed in Moto2 is fully master the bike. 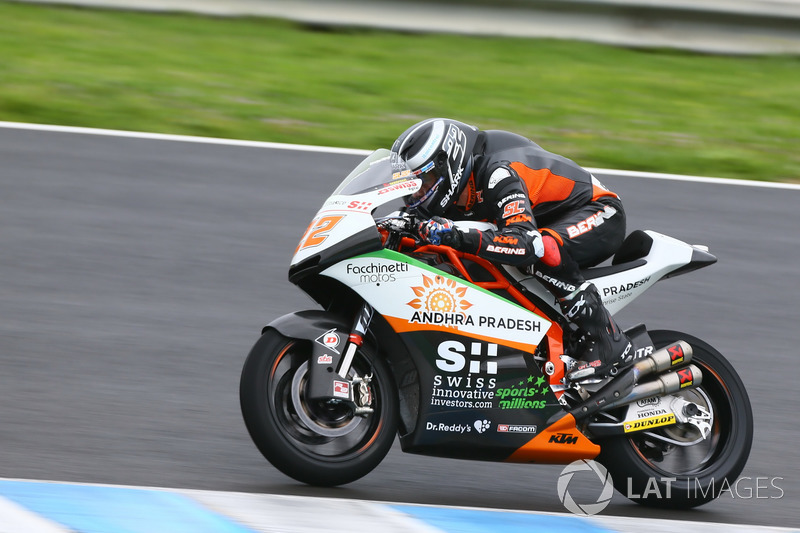 Of the two ex-MotoGP riders stepping down to Moto2 this year, Sam Lowes has been looking stronger than Hector Barbera in testing.

While Barbera, at the age of 31, will have a hard time returning to MotoGP, Lowes will be motivated to redeem himself following his ill-fated season in the premier class with Aprilia.

It’s hard to tell at what level Lowes will be at the beginning of the season, but getting used to a Moto2 bike shouldn't take long as he raced in the series between 2014 and 2016, winning two races.

The Briton also ended pre-season testing strongly, setting the pace at Jerez, although the fact his unfancied teammate Iker Lecuona was right up there with him might make the team look better than Lowes himself.

Once everything is back to normal, there is no reason why he can’t again be a frontrunner, but Lowes will need to do better than fourth overall, his position in 2015, to earn a second shot in MotoGP. 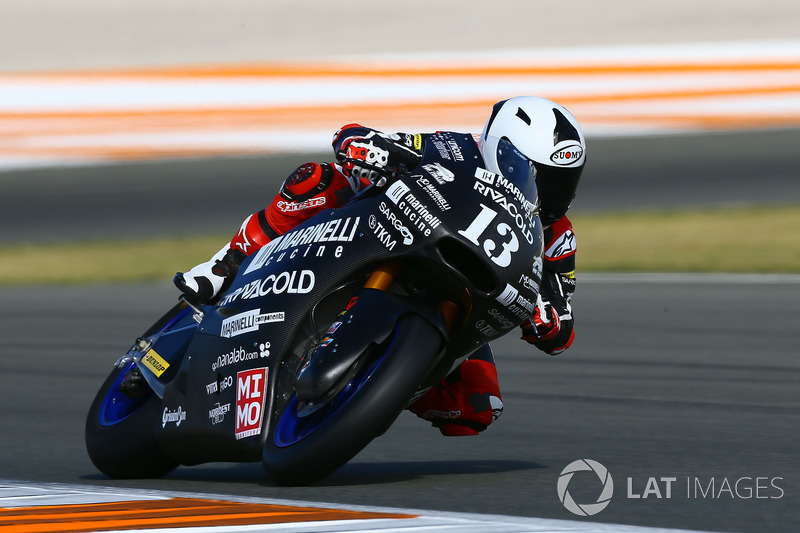 Romano Fenati entering Moto2 was a long time coming – it seems like forever since he finished second and first in his first two Moto3 races and looked like the next Italian prodigy on the scene in 2012.

It’s fair to say his career stalled since then, the lowest point coming in 2016 when he was kicked out of Valentino Rossi’s junior academy as well as the Sky VR46 team on disciplinary grounds.

Fenati admirably recovered from that last year riding for the Snipers Team, and while he couldn’t make Mir sweat too much for the Moto3 title, the Italian deservedly took the runner-up spot.

Having spent six years in Moto3, Fenati will need to impress quickly in Moto2 to get back on the radar of teams in MotoGP. Given his Snipers team is also new to the series, that might be tough. But his form in Moto3 years ago show he's a quick learner. 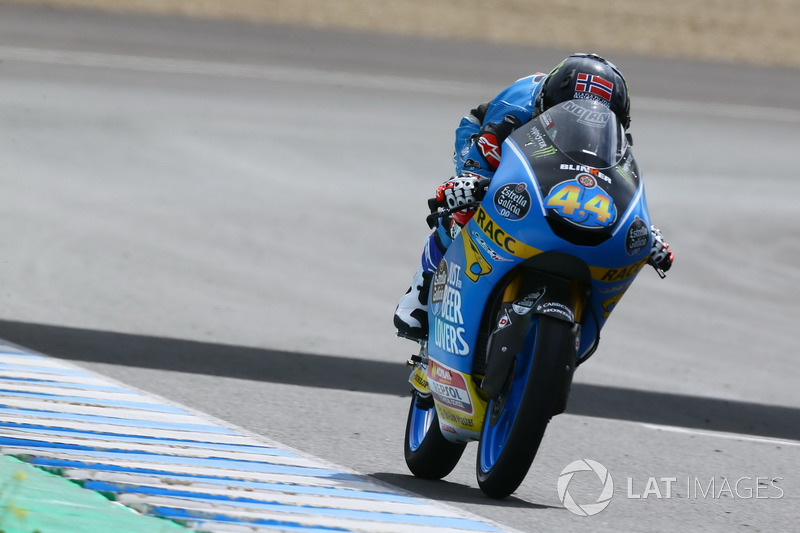 Coming into his third season in Moto3, a lot is expected of Aron Canet. Showing flashes of brilliance in his debut year in 2016 – including a maiden podium at Phillip Island - Canet proved a consistent force in '17 as he spearheaded the efforts of the Estrella Galicia squad.

Storming to three victories and third in the standings in his sophomore campaign, the Spanish youngster will have his sights set on bigger things in '18.

Remaining with Estrella Galicia for his third assault on the introductory class, this stability in his surroundings will prove vital in his quest to become world champion.

At times, he proved a little inconsistent last season. But if he can sort this, his sheer speed will make him a dangerous prospect this year. 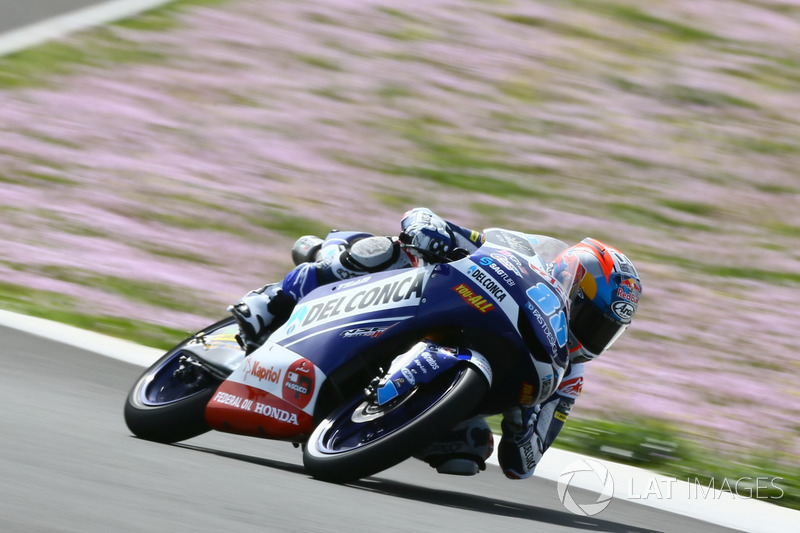 Last year's nearly man Jorge Martin proved to be king of qualifying, tallying up an impressive nine pole positions across the year.

However, he was only able to convert that to victory on one occasion, taking his maiden Moto3 win in at the season finale in Valencia. Two races on the sidelines through injury also hindered his title prospects.

Now in his fourth season in the class, and with two major rivals in Mir and Fenati out of the picture, Martin is well and truly among the favourites for this year's Moto3 crown.

The competition around is still stiff – not least within his own backyard at Gresini with teammate Fabio Di Giannantonio – but Martin has already made statements of intent, topping two of the three winter tests, while finishing the other third quickest.

If he has been able to iron out his issues towards the end of races, Martin could well prove to be unstoppable this season. 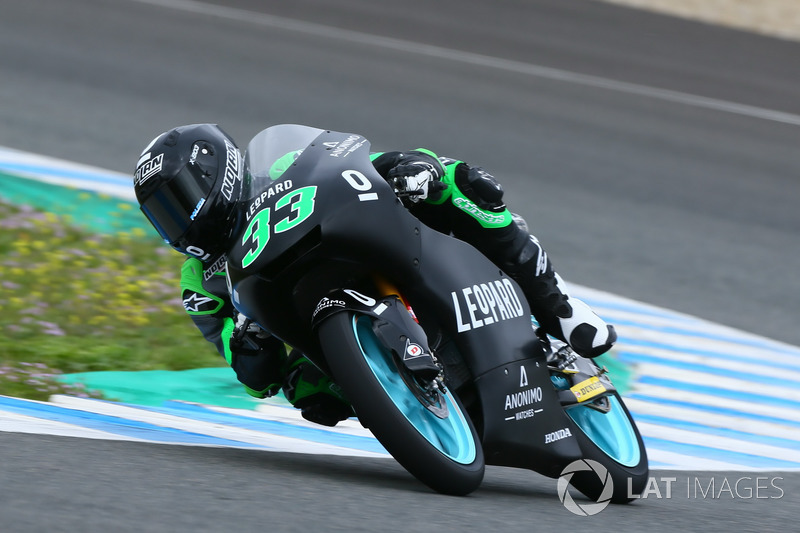 Realistically, Enea Bastianini shouldn't even be on the Moto3 grid in 2018. Having made a splash in his first two seasons in the class in '14 and '15, Bastianini should be established in Moto2 by now.

However, injury in '16 and a largely unfruitful switch from Gresini to Estrella Galicia in '17 – which yielded just three podiums and sixth in the standings - means he is stuck in the lightweight class while many of the riders he was beating before have stepped up.

Now with '15 champion team Leopard Racing, this year surely represents the Italian's last chance to prove to the rest of the world he truly is a future grand prix great.

Second fastest after the final test at Jerez and only a tenth shy of title favourite Martin, Bastianini looks like he has already taken his opportunity with Leopard by the scruff of the neck. 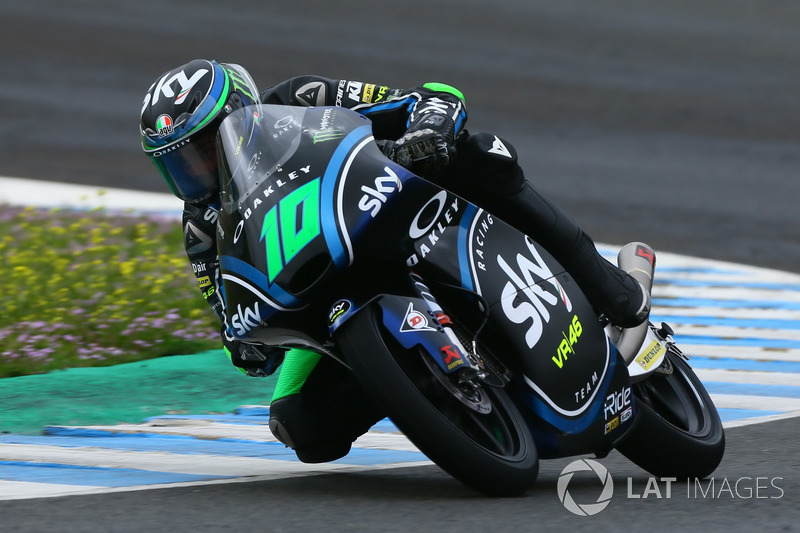 Dennis Foggia is the latest in a fairly sizeable list of promising Italian talents being groomed for greatness by nine-time world champion Valentino Rossi.

The 17-year-old was an unstoppable juggernaut in last year's CEV Moto3 Junior World Championship, claiming the crown with two rounds to spare.

He backed up his CEV performances with three outings in Moto3, replacing the injured Darryn Binder at the Platinum Bay Real Estate team at Brno, while making two appearances with the Sky VR46 team at Aragon and Valencia.

Finishing 14th on his Moto3 debut, he went on to finish eighth and a seventh in his other two races.

Testing has been pretty low-key for Foggia – he was fourth fastest after the first Jerez test, but 20th at the end of the second – but the impression he made in his sensational wildcard runs last season has resulted in many people tipping him for great things in his first full season in the class.